Ryan Berk (left) and Michael Dworkis have gotten their investment fund off the ground. Photo by Aaron Kremer.

After looking at 260 companies to invest in, a startup private equity fund run by two childhood pals has made a cool first investment deal.

Founders Michael Dworkis and Ryan Berk, who grew up together in Dallas and both worked as investment bankers in New York City until moving to Denver in December, said Store It Cold fits their investment strategy to a T. The company makes a device nobody else has, which tricks a window AC unit into blowing cold enough to keep a small walk-in cooler at 38 degrees. Plus, the company founder was ready to take a back seat. And the pair thinks they can boost sales from the current 6,000 units per year, mostly to farmers and agricultural businesses, by actively taking over management. 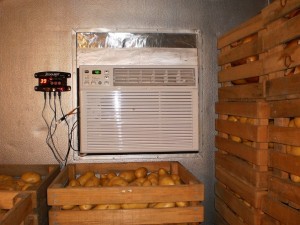 The Coolbot rigs a normal AC window unit to cool a small space to refrigerator temperatures. Image courtesy of Stoic.

“We see this as a product that delivers an immense value proposition versus the alternatives,” said Berk, 29.

He said farmers who want to cool a small walk-in unit have two options: They can pay $4,000 to $5,000 for an overhead cooling system, or they can buy Store It Cold’s product, called a CoolBot, for $300 and then a window unit for around $500.

The CoolBot tricks the AC unit into thinking the room is still warm, so it keeps blowing cold air.

Dworkis and Berk will share the title of co-CEOs of Store It Cold. They’re also looking to hire a head of sales to work out of their Denver office and to push international sales. The pair also wants to explore sales outside agriculture, such as to brewers and florists.

“We’re looking for the older, less sexy companies,” said Dworkis, 30, adding that Stoic has looked at deals in distribution, manufacturing and business services.

The fund’s money comes from around 30 investors, Dworkis, said, including former investment banking colleagues and wealthy individuals. Dworkis said Stoic is looking to buy the majority stake in businesses that have profits of $1 million to $10 million per year.

But the New York market is hyper-competitive for private equity firms scouring the country for businesses to acquire, Berk said.

“We were seeing a lot of deals out of Texas, Colorado and the Midwest and not as many in the Northeast,” Berk said. “We thought it might make sense to be more regionally focused.”

Ryan Berk (left) and Michael Dworkis have gotten their investment fund off the ground. Photo by Aaron Kremer.

Looks like a savvy investment and a surefire winner!