Pablo’s Coffee has a third location percolating. And like the two mainstays in Capitol Hill, hold the Wi-Fi.

The Denver coffee roaster is under contract to buy a 2,000-square-foot retail spot at 3045 S. Broadway between Dartmouth and Cornell streets in Englewood.

It will be the roaster’s first new retail location since opening at 13th and Pennsylvania in 2012, owner Craig Conner said.

“That area is underserved,” Conner said of the new neighborhood. “There are not a lot of people doing our product in that area as compared to the rest of the metro area.”

“Most people who move to Denver end up living in Capitol Hill. And they end up with a fondness for us,” he said.

But the new spot will work for the many customers who have moved from Denver apartments to houses in Englewood.

“It’s a neighborhood in transition to some degree. And now it’s a lot of younger people with families that enjoy our product,” he said.

Conner launched Pablo’s in 1995 with a location downtown at 14th and Arapahoe. The chain’s shop at Sixth and Washington opened in 2002, and the downtown spot closed after that. 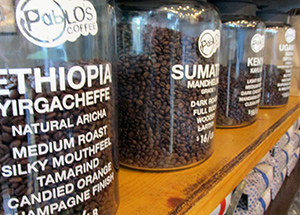 Beans on display at the 6th Ave. location.

Conner also has a coffee roasting wholesale business with a facility at Seventh and Lipan. He said his 100-odd wholesale accounts – supplying the likes of Stella’s, Denver Bicycle Cafe and City O’ City – contribute about a third of his overall revenue.

The land sale is scheduled to close in December, Conner said. Then the upfit, which Conner said could cost around $100,000, will take approximately eight months. He’s paying for the renovations with savings.

And like his other two locations, Conner said the third Pablo’s won’t have free Wi-Fi.

“I do get a number of negative comments surrounding that, but it adds value to the coffee experience. We’re not just a study hall or a home office,” Conner said. “When I walk into a cafe that is Wi-Fi-driven, it seems almost a strange feeling. All you see is people’s faces with screen light. They seem like coffee shop zombies.”

The local coffee roaster is leaving its normal territory with a new retail location under contract in Englewood.

Welcome to the `hood! It will be great to have you!

“Cap Hill?” No, 6th and Washington is not Cap Hill or even close. It’s Alamo Placita.