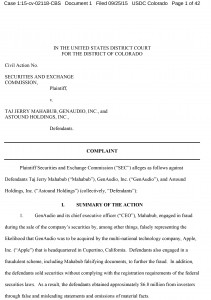 The SEC is coming after a local software firm, alleging the company and its CEO scammed investors out of $6.8 million.

The Securities and Exchange Commission is suing Centennial-based GenAudio in U.S. District Court and claiming the company raised nearly $7 million after its CEO lied to potential investors about tech giant Apple’s interest in acquiring his company.

The SEC also names CEO Taj Jerry Mahabub as a defendant and claims he told investors Apple wanted to buy or license GenAudio’s technology, circulated emails and transcripts of supposed phone conversations with Apple employees to potential investors and talked about meetings with Apple C-suite execs.

In its lawsuit, the SEC alleges those emails and transcripts were fakes, and the meetings with Apple’s top decision makers never happened.

GenAudio designs programs that can “throw” a sound in a pair of headphones in the same way ventriloquists throw their voice. The technology has applications in computer gaming and the audio industries, according to the company’s website.

The SEC’s complaint, filed in the Colorado Division of the U.S. District Court, alleges Mahabub routinely misrepresented Apple’s interest in GenAudio to entice more than 70 Colorado investors into buying $4.5 million in stocks directly from the company and an additional $2.3 million of Mahabub’s own shares from 2009 to 2012.

GenAudio got in touch with Apple in 2006, the suit alleges, when Mahabub sent an email to the California tech company. The lawsuit claims Mahabub met with mid-level Apple employees in October 2009, but no deal came from the meeting.

But the SEC says Mahabub told his investors he had met with high-level executives at Apple, including the company’s CEO, COO, and senior vice president of marketing. The SEC claims Mahabub falsified emails from Apple employees and distributed them throughout GenAudio beginning in October 2009.

But Mahabub doesn’t stop there, according to the complaint. In May of 2010, the SEC claims, Mahabub forwarded a fabricated transcript of what he claimed was a recorded phone conversation between himself an Apple acoustic engineer.

In the supposed transcript, the suit alleges, the Apple employee told Mahabub that “the (GenAudio) demos were all very well accepted” and that Steve Jobs himself thought the “technology is too good to be rolled into a giant pool of other features” and was considering how to “explode (the) technology into the world.”

All of this alleged progress on an agreement with Apple, the SEC claims, helped the company rake in millions in investments.

The SEC says Mahabub repeated his Apple claims during two capital raises from 2010 through 2012. According to the suit, GenAudio told investors it needed the cash from both funding rounds to keep the business open.

The lawsuit alleges that in 2013, some of Mahabub’s shareholders decided to cash out of GenAudio, but the company told them it did not have the cash to repay the investors. The SEC’s suit claims GenAudio has only made $100,000 since its founding in 2004.

In 2014, the suit says, Mahabub reorganized GenAudio under a company called Astound Holdings, which is also named in the suit. The lawsuit says Astound Holdings owns the rights to GenAudio’s intellectual property, assets and liabilities, except for debts owed to those shareholders.

Now, the SEC is demanding that the company repay all of its “ill-gotten” gains, with interest. Additionally, the SEC wants Mahabub to be barred from ever working as an officer for a company again.

SEC spokeswoman Judith Burns declined to comment on the case outside of information noted in the complaint. BusinessDen attempted to reach GenAudio by phone and email, but the company’s phone number was disconnected Monday and emails were not returned.

Mahabub, 44, founded GenAudio in 2004 to begin working on what he called “360-degree audio,” according to the GenAudio website. He has held a majority share of the company since it began, the SEC’s complaint claims.

Allegedly fake meetings and emails with Apple executives and even a rumored compliment from Steve Jobs fuel the federal government's lawsuit against a Centennial tech company it claims cheated investors out of $7 million.