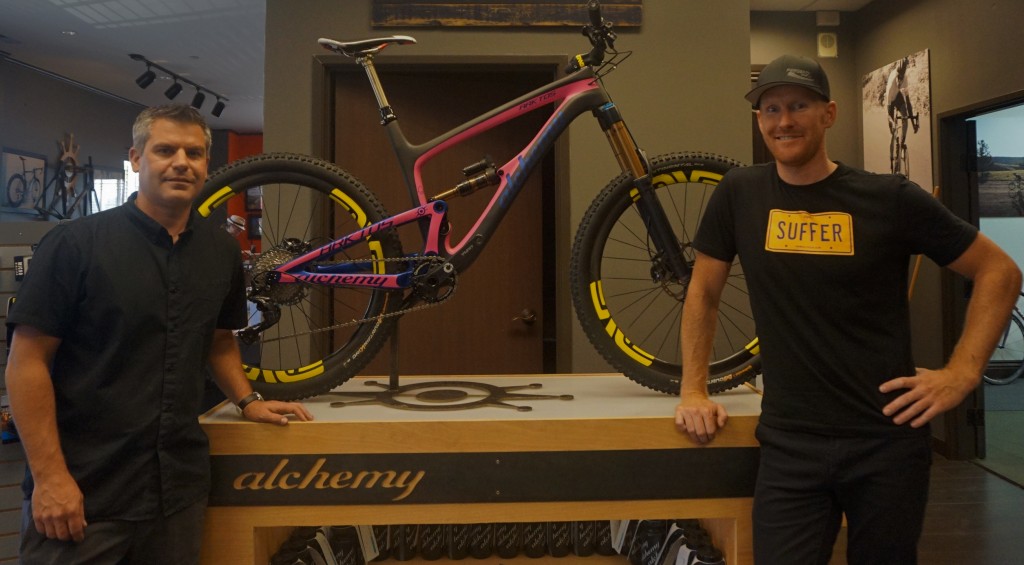 Alchemy Bicycle Co., a Texas transplant that until now has built high-end road bikes, will roll out its newest model next year.

The Arktos, named from the Greek word for “bear,” is a lightweight off-road bike using a new suspension system that Alchemy developed specifically for the bike. The company unveiled the new ride at Las Vegas’ Interbike trade show earlier this month.

The company, which operates out of a 14,000-square-foot facility at 7700 E. Cherry Creek South Drive that combines a factory, cafe and showroom, said the new bike will be available to the public in the first quarter of next year.

“We’re really making a push right now to be a complete bicycle company, where we offer frames and complete builds for cyclo-cross, road bikes and mountain bikes,” said Cody Baker, Alchemy’s sales manager. “We want to be a company that covers all of our bases really well, and we want that to be apparent to our retailers.” 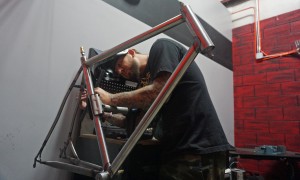 Jeff Wagner works on a road bike frame at the Alchemy shop.

The Arktos is Alchemy’s first crack at a full-suspension mountain bike and will open the company up to a new customer demographic – trail racers. The company has been focused on road bikes and has only one other mountain bike model, the Oros, which doesn’t have an independent rear suspension.

“What really makes (the Arktos) special is we worked with a guy named David Earle, who’s a veteran in the bike industry and helped us design the bike’s suspension system,” Baker said. “It handles all kinds of bumps really well – the little stuff while you’re climbing, and the bigger bumps during descents – quite a bit better than what’s available now.”

The bike’s frame is made of carbon fiber, a material that’s extremely tough for its light weight. It’s also easier to bend and mold than other materials used to make bikes, like steel, aluminum or titanium.

Initially, Alchemy will only sell Arktos as a frame and rear shock for $3,750. But Baker said the company plans to debut full-build options in the future.

Alchemy has distributors in 10 states and in the U.K., Hong Kong, Singapore, Australia and Colombia. Bikes and frames are also available directly from the company. 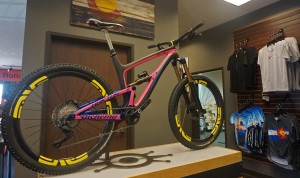 The Arktos should roll out to the public in the beginning of next year.

About 45 retailers carry Alchemy products around the U.S., but Baker said the Arktos may change that.

“Because we’ve been mostly a road bike company, we’ve worked with higher-end, boutique-style bike shops,” he said. “There’s a million mountain bike-specific shops out there. That’s who we’ll be focusing on right now, is new mountain-oriented shops.”

The company does all of its manufacturing in-house except for a single component on the Arktos’ rear suspension. It’s a difficult piece to reproduce and is bought from overseas companies.

It also uses parts from other Colorado bike companies in its builds, including components from Longmont-based Shimano and wheels made by Rol Wheels, based out of the same facility as Alchemy.

Baker said the company produces between 400 and 450 bikes per year, and revenue has doubled each year since 2013.

The firm relocated to Denver from Austin three years ago.

And the company may need to scale up again if the Arktos takes off, Baker said.

“With the interest we’ve seen so far, we’ll most likely be hiring new people on within the next year or so,” he said. “We’re hiring someone on next week, but even beyond that, if we can continue our growth rate, we’ll have to expand or look for a new facility.”