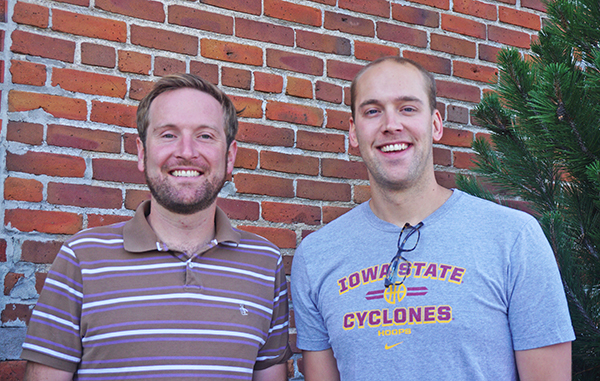 Rob DuRay and Rob Acker think they have the perfect beer for the discerning Colorado bride and groom: a brew of their very own – with its own flavor, name and label.

“We’ve always been interested in finding the right beer for the right occasion: whether you’re on a raft, or a ski lift or going to a football game,” Acker said. “You can go to Argonaut and they have a lot there, but we thought, ‘What if we could tailor our beer a little bit more to whatever we’re up to?’”

Acker and DuRay have been home brewing for four or five years and have made event-specific beers for their own crawfish boils and wing cookouts. The hobby started looking like a business niche a year ago after a friend asked them to brew a custom beer for a wedding.

The company charges about $200 for a standard five-gallon batch of beer. That price comes out to $4 per beer, Acker said, and can go up or down depending on the ingredients.

Salud starts the process by meeting with the host of the event to learn how much beer is needed and what sort of brews the customer prefers. Then Salud sets up a tasting consultation – the Robs meet the customer at a bar to try a bunch of different beers – before settling on a final recipe.

Salud makes the beer from a small mobile brewing setup. DuRay and Acker then bottle or keg the beer themselves and cart it to the event. They can also add custom labels to their bottles – an offering Acker said makes good souvenirs for wedding guests.Since then Salud has made Belgians, stouts, wits and porters for a dozen events including fundraisers, private parties and one 20-gallon order for a startup party. Right now they have a peanut butter porter brewing for a nonprofit greyhound rescue raffle.

DuRay, 31, and Acker, 28, both come from the nonprofit sector. Acker builds software databases, and DuRay works on the civic engagement programs for nonprofits.

So far DuRay and Acker have a few thousand dollars invested in the business. That money has been split between legal fees and some equipment upgrades. Acker said the pair is strictly focused on brewing small batches for direct sale to a customer.

“We’re making sure they’re reserved for private or semi-private events and we’re not selling commercially or doing any sort of distribution,” he said. “We can’t just post up at a farmer’s market and start selling beer to people.”

Acker said they already had about 75 percent of the gear they’re working with before going into business – they use small home brew tubs, for example, not 10-foot shiny steel tanks.

Right now, scaling up can be as simple as running to the home brew store for a new 5-gallon bucket.

“What we’ve done to this point is basically expand our home brew operation,” DuRay said. “Of course that’s not the goal – we want to keep reaching more people and working with more groups.”

DuRay and Acker said most of their business so far has come through friends and their connections in the nonprofit community. This fall, they plan to start reaching out to event venues and wedding planners around town to try and drum up more business.

The pair has also considered looking for a space of their own to brew and potentially rent out for events. But with or without their own brew house, Salud is hoping to make a party of each step in the process.

I like the concept and think it is a fun idea, but is it LEGAL. I would ask both the founders as well as the reporter to look into this before spending much more on the business. Could be walking into a problem with the law.