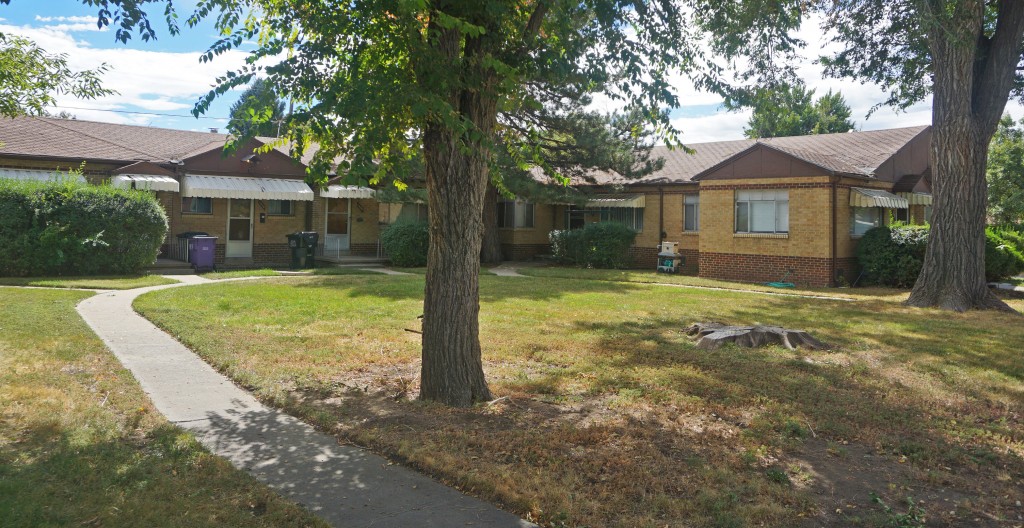 A complex of low-rise connected apartments will be renovated in preparation for individual sale. Photos by Burl Rolett.

Jeremy Cortright is diving into the Sloan’s Lake construction wave.

Cortright Capital bought a seven-apartment complex in Sloan’s Lake this week with plans to renovate the units and sell them individually as condos next year. The company paid $950,000 for the property at 1600 Utica St., a site Cortright said he liked for its central location in the West Denver neighborhood.

“This is a block away from the lake, close to the light rail and a couple blocks away from all the new action (at the St. Anthony’s redevelopment),” Cortright said.

The complex as-is has six one-bedroom apartments and a single studio. Cortright said the apartments are larger than most one-beds, so the plan is to convert those into two-bedroom units and renovate the studio into a one-bedroom.

Cortright said his 7-year-old firm typically works in smaller duplex- and triplex-type renovations and buys into larger, ground-up deals as an equity partner. As older buildings fall all around Sloan’s Lake to make way for new townhomes, Cortright said he’ll keep the exterior of the 65-year-old complex intact.

“We generally keep and renovate existing shells and we’ll passively invest in new builds,” he said. “We’re also limited with the zoning over there; everything else that is getting knocked down has a little more lenient zoning, but this site doesn’t.”

Cortright declined to say what the project would cost to build, as the company is still taking bids.

He estimated the condos will draw in singles, couples and a few smaller families. He could not say what they would sell for, but said price would be a major draw in a booming Sloan’s Lake residential market. Unit sizes will average 800 square feet.

“It will probably be the price point first, and instead of just brand new product, we’re going to incorporate some of the older elements into this,” Cortright said. “And you should have a little bit more elbow room.”

The property is just west of the booming St. Anthony’s redevelopment. Plans for that 20-acre site include apartment complexes by Hines and Trammell Crow Residential, a condo tower to be developed by NAVA Real Estate Development and a retail complex anchored by an Alamo Drafthouse.

A complex of low-rise connected apartments will be renovated in preparation for individual sale. Photos by Burl Rolett.

A local firm is riding the development wave in Sloan's Lake and has plans to revamp a small apartment complex into condos.