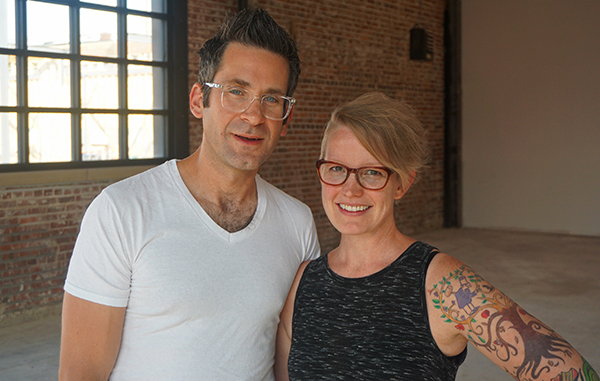 Obe and Whitney Ariss are opening a new restaurant in RiNo. Photos by Burl Rolett.

A Denver couple is bringing a New Orleans-inspired food and tunes spot to RiNo.

Obe and Whitney Ariss plan to open the Preservery at the Backyard on Blake development this winter. It’s a casual eatery and market concept that Whitney Ariss said is missing in the fast-growing River North neighborhood.

“There are a lot of breweries, but there’s still not a lot of food, and especially not a lot of inexpensive food places,” she said. “We hope to be the sort of place people will come to every day – it’s fast-casual, so it’s not like you will need to break the bank to eat here.”

The Arisses leased about 2,600 square feet at 3040 Blake St. this summer and hope to have The Preservery open in January. They’re planning a sort-of “mini, indie Whole Foods” with a charcuterie, cheese, sandwich, salad and soup eatery and an in-house bakery and retail market.

Both Whitney and Obe attended the music school at UC Boulder. Since then, Obe worked for seven years as the development director for the Colorado Symphony. 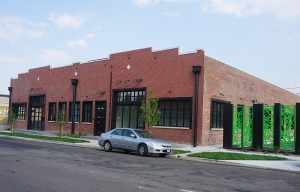 The Preservery will open in the Backyard on Blake redevelopment project.

They got a taste for running a food market at Marczyk’s Fine Foods, where Obe has worked the last year and Whitney has worked for five years. The couple first started working on The Preservery about two years ago and hammered out a business plan while taking classes through Denver’s Small Business Development Center.

The Preservery name was inspired in part by Preservation Hall, a jazz music venue in the New Orleans French Quarter. Music will be an important part of The Preservery, and the Blake Street eatery plans to host musicians.

The Preservery will also borrow a signature menu item – the muffuletta – from New Orleans. It’s a salami, capicola and mortadella sandwich on sesame bread topped with olive salad and provolone cheese.

They’ll also try and cash in on the evening crowd by keeping late hours, Whitney Ariss said, adding it can be tough to find a late-night bite outside of standard fast food or diner fare.

“We love Denver, but it is severely lacking in good food late at night,” she said. “And for looking for any sort of vegetable-focused food, there is little to nil.”

The couple is financing startup costs with a loan from Wells Fargo. Arrow B Architecture is designing the space, and Spectrum General Contractors will head up construction. Melissa Nochlin at Broad Street Realty worked with The Preservery on its site search.

Both Whitney and Obe plan to start working full-time at The Preservery once the shop opens. Obe Ariss said they are looking at hiring between 15 and 18 employees. After getting the business up and running, Obe and Whitney Ariss said they hope to have at least one more Preservery location in the next five years.

“We’re going to start with this restaurant and make it as sustainable and profitable as we can, and then hopefully expand on that,” Whitney Ariss said.

Obe and Whitney Ariss are opening a new restaurant in RiNo. Photos by Burl Rolett.

I’ve attended many a soiree at the Ariss’s home. Besides being fabulous cooks, Dr. Obe is a classically trained pianist and Whitney is a soprano that’d make anyone swoon! Can’t wait for the Preservery to open (any maybe sing a few songs with them)!

we are moving to 2528 walnut in a few weeks and are so excited about a market such as this coming to the neighborhood. Much needed and cannot wait!
Sincerely,
Judith

Obe and Whitney were star students in the Leading Edge class at the Metro Denver SBDC. They have been working on this dream for some time. It is wonderful seeing it come to reality. Can’t wait to become a regular. Great people-great food-great location!