Orchestrating all the moving pieces of a new outdoor music venue has taken a bit longer than expected.

“We’ll start the design phase in the next week or two,” Levitt CEO Chris Zacher said. “It’ll be wrapped up on Feb. 28 of next year. We got pushed back a year due to the design procurement process with the city.”

Levitt Denver signed a 50-year operational agreement with the city and county of Denver in 2014 on a 60,000-square-foot stretch of Ruby Hill Park, where it plans to develop and operate an amphitheater and office space.

The nonprofit aims to put on 50 free concerts in Denver each year. Zacher said that about half the acts will be local or regional. While entry will be free, Levitt Denver will collect revenue from alcohol and vendor sales.

Levitt Denver began surveying sites for the amphitheater in 2012 and announced its intent to build in Ruby Hill later that year. The group is an offshoot of the Levitt Foundation, which has helped found venues in six other cities: Arlington, Texas; Bethlehem, Pennsylvania; Los Angeles; Memphis; Pasadena; and Westport, Connecticut. When Denver’s pavilion is completed, it’ll be the seventh Levitt venue.

The Levitt Foundation decided to build a venue in Denver because of the city’s bustling emerging music scene.

“If you look at the music landscape in Denver, we have a lot of B- and C-level musicians,” Zacher said. “But we’re starting to break national acts because of the level of musicianship in groups like the Lumineers and DeVotchKa.” 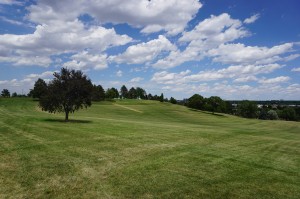 World-renowned Red Rocks is 15 miles from Ruby Hill Park, but Zacher said he doesn’t see the concert venue as competition to the Levitt Pavilion.

“They’re putting on shows with acts that we’re not bringing in,” he said. “Their focus is on talent that’s already big, and we’re focusing on emerging talent.”

The Levitt Pavilion will actually take up more space than Red Rocks, Zacher said, but it won’t be able to match Red Rocks’ 9,500-person capacity.

“It would be premature for me to talk about the design, but I can tell you that it’s a very unique site,” said Joseph Montalblano, a principal at Studio Trope. “Ruby Hill Park has a natural topography that lends itself well to an amphitheater. The idea is to design the building so that we can use the existing topography as a bowl and have people sit on the sloping grass.”

It will cost Levitt Denver about $4 million to design and build the venue. About $2 million came from the city and county of Denver, and the Levitt Foundation pitched in $435,000. That left about $1.6 million for Levitt Denver to cover.

“The Gates Family Foundation, the Bonfils Stanton and the Boettcher Family Foundation funded us upwards of $100,000 each,” Zacher said. “We’ve been raising additional funding through corporate, individual and some smaller family foundations.”

Zacher said Levitt Denver just needs to raise $127,000 more to fully fund the project. He said he is negotiating sponsorship packages with private corporations to secure the money.