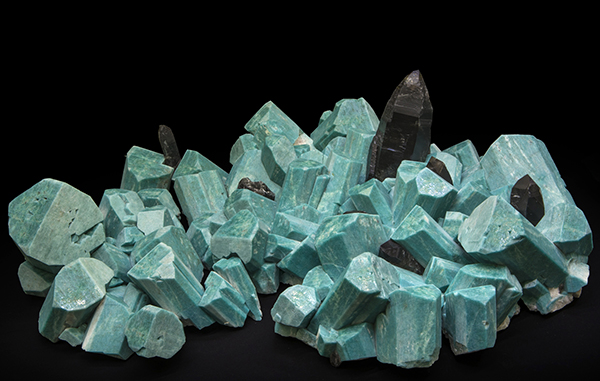 A formation of amazonite and smoky quartz crystals will be added to a local museum’s collection. Photo courtesy of Joe Budd.

It was a million-dollar find.

A 90-pound crystalline hunk of two Colorado minerals – amazonite and smoky quartz – was unearthed in Park County three years ago. It proved to be the largest formation of those crystals ever found in the state. Now, the Denver Museum of Nature and Science is trying to raise seven figures to add the formation to its collection.

“There are very few times in your life when you can say you had the first, the only or the best, and we want Colorado citizens to have the best,” said Bridget Coughlin, vice president of strategic partnerships for the museum.

Earlier this month, the museum held a fundraiser that generated $400,000 for the purchase of the rock. Coughlin said the remaining $600,000 will likely come from the DMNS Foundation and more fundraising. Even without the sale finalized, the formation has already been moved over to the museum.

“The simple math shows we’re still short of that million,” she said. “Parts of (the museum’s endowment) are restricted for collection acquisition. We can use the endowment to supplement the funds.”

The combination of blue-green amazonite and black quartz formed 1 billion years ago in a mineral-rich region 40 miles northwest of Colorado Springs. Coughlin said its composition offers insight into the subterranean forces that shaped the Rockies and the geological nuances that produced such a massive plate of crystals, making it an ideal addition to the museum.

“Part of the reason we really wanted it to come to the museum and not a private collection is it really embodies a beautiful Colorado story,” she said. 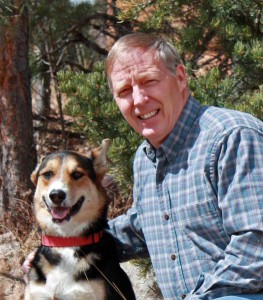 Joe Dorris, a longtime miner in the Pikes Peak region, discovered the formation in 2012. He and his family had been chipping away at an area surrounding Crystal Mountain for years before a stroke of luck uncovered the 90-pound slab. A two-phase extraction revealed a plate roughly 3 feet long and 2½ feet wide with crystals as tall as 9 inches.

“Some might argue that there have been bigger plates found, but there’s been nothing of this quality with this size of amazonite crystal,” Dorris said. “It basically blows everything else out of the water.”

The family discovered the piece while filming for “Prospectors,” a reality show on the Weather Channel that follows miners through the Rockies. They named it the Smoky Hawk King because of its size.

“I wasn’t afraid to put that name on it because I don’t think it’s ever going to be matched,” Dorris said.

Amazonite formations are few and far between. Outside the United States, which has only a few known deposits, the mineral is found in Brazil, Russia, Ethiopia and Madagascar. But the highest-quality pieces consistently come from Colorado, Dorris said.

“In Colorado, we have these cavities in which these crystals form,” he said. “In other places, they’re encased in the rock and you don’t get to see the big crystal.”

Amazonite isn’t a precious stone, and it doesn’t have much practical use. But high-quality pieces can fetch good prices from collectors and jewelers. Dorris compared the value of amazonite to the value of fine art.

“You enjoy a mineral specimen like a painting on the wall,” he said. “It’s one of the qualities of being human that draws us to these kinds of things.”

From a quality standpoint, the Smoky Hawk King sets the standard, Dorris said. The crystals are unusually large and rich in color.

“It’s really a very aesthetic color for both minerals, and the contrast just pops,” Dorris said. “The fact that you have really strong color and really big crystals makes this frankly unique. Usually when you get big crystals, for some reason they just don’t have really deep color.”

Coughlin said it will take at least a year for the DMNS geologists to prepare the crystals for display and set up the exhibit. The coming sale will mark the first time the DMNS has purchased a geological item for display.

“It was really an iconic moment,” Coughlin said. “Typically, we have smaller gems or fossils donated to us or find them ourselves. We haven’t done direct solicitation to ask the community to make something happen for us.”

A formation of amazonite and smoky quartz crystals will be added to a local museum’s collection. Photo courtesy of Joe Budd.

I watched the rockhound show where Joe Doris son was putting together what they had dug up. My question is this what they for that huge amozonite specimen that that I read about on the internet ?