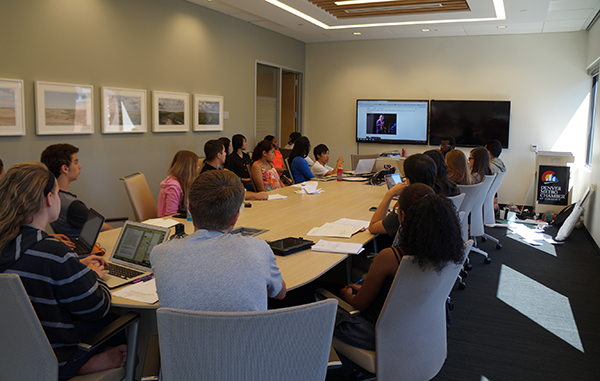 Denver-area students get lessons in entrepreneurship at a new nonprofit program. Photos by Katherine Blunt.

The students, silent except for the clatter of their keyboards, took careful notes as a young entrepreneur explained the benefits of marketing plans and promo videos.

The 20 teens from 16 high schools trekked from all corners of the metro area to LoDo for My First Startup, a week-long camp sponsored by Junior Achievement Rocky Mountain that walks aspiring entrepreneurs through starting a business. The pilot program kicked off Monday.

The program is led by three volunteer entrepreneurs.

“I always wished I had a summer camp intensive that took the very next step,” said volunteer Steven Silva, CEO at Generation BBOY, an Aurora-based company that sells gear for break dancing. 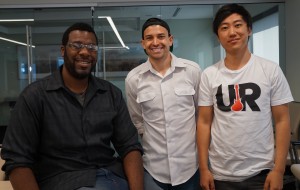 Silva jumped on board when Jon Kim, CEO and founder of Los Angeles-based University of Rock, suggested the idea for My First Startup. Kim, originally from Arvada, knew Silva through Junior Achievement’s Business Week program. Both participated as students and advisers.

“We have lots of plans for it, but we wanted to do a pilot program first,” Kim said.

The two planned a curriculum with day-long lessons on R&D, branding, marketing and social media. The week will end with a pitch competition that awards $500 to the winning startup and a chance to pitch the idea during Denver Startup Week in September.

The students work in groups of three to create plans for their business ideas. Some hope to launch for-profit companies; others have big plans for nonprofits. 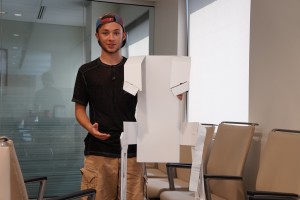 Alex File, a senior at Union Colony Preparatory School in Greeley, takes the Department of Transportation’s new Bustang to Denver each morning, a 1½-hour commute.

He’s working to design an exoskeleton that can help construction workers lift heavy material, a project that combines his interest in math and prosthetics.

“This is kind of a culmination of everything I’m doing,” he said. “It is possible, and it can help companies save money with health insurance.”

Semhal Abbady, a senior at Rangeview High School in Aurora, is working to start a nonprofit called Only Rocks that would raise awareness about the lack of school supplies in developing countries and distribute materials to areas in need. One of her team members thought of the business name, inspired by the game rock, paper, scissors.

“Kids in poverty don’t have paper or scissors,” Abbady said. “They only have rocks.”

Kim and Silva said they hope to make the camp an annual program. Kim has been live-streaming snippets of the week through an app called Periscope. He said he received a lot of response from young entrepreneurs across the country.

“I’ve had kids asking when My First Startup is going to come to them,” Kim said. “It would be cool to find a way to do it in multiple cities.”

Denver-area students get lessons in entrepreneurship at a new nonprofit program. Photos by Katherine Blunt.

A new program for area high school students kicked off this week, bringing 20 teenagers and three entrepreneurs together for a week-long camp in building a business.

Very interesting article describing an amazing project for your high school students. Thank you for sharing!

Nice one entrepreneurs. The sooner the lads understand the basics of entrepreneurship, the better for not only them but the society at large.