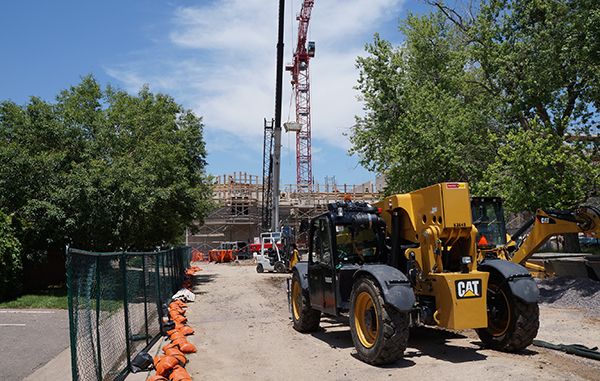 Work is underway on a new building at DU. Photo by Katherine Blunt.

The computer science and engineering school at the University of Denver is getting a new $60 million building.

The 110,000-square-foot Daniel Felix Ritchie School of Engineering and Computer Science will be equipped with new engineering and manufacturing technologies, such as 3-D printers.

“It’s the sort of equipment which we have not had as part of the school in the past,” said JB Holston, dean of the school. “We want to make it a lot more accessible to a lot more folks.”

Holston said Denver area businesses might be invited to the facility to test prototypes and build products.

The expansion began at 2155 E. Wesley Ave. in mid-2013. DU expects to wrap up construction by fall 2016, said Theresa Ahrens, a spokeswoman for the university.

The new building will nearly double the computer science and engineering school’s space, which Ahrens said currently stands at about 65,000 square feet over multiple buildings.

In addition to the engineering and computer science programs, the building will also house the university’s Knoebel Center for the Study of Aging.

Daniel Ritchie, who served as chancellor of the university between 1989 and 2005, donated $41 million to the project, and Bill Peterson, who graduated from DU in 1969 with an engineering degree, donated $5 million, Ahrens said. Betty Knoebel, widow of food industry mogul Fritz Knoebel, donated $9 million for the establishment of the Knoebel Center.

Holston said the new building will have more open space and meeting rooms, allowing for greater interaction between programs within the school and with other schools.

“There are two really great convening spots where we can run a series of events with industry and civic society and create collisions between a lot of constituents inside and outside DU,” Holston said.

Holston, who founded several startups and held executive roles at companies including NBC, said he thinks the renovations support changes in the school’s curricula that encourage more cross-disciplinary teamwork.

“This is not what the school has done traditionally,” he said. “It’s one symbol that DU is trying to build a platform that has much greater connections to the rest of the ecosystem out there.”

Work is underway on a new building at DU. Photo by Katherine Blunt.

The university's school of computer science and engineering is getting a new home equipped with more spaces for collaboration and 3-D printers.

Where on campus is it, who is building it, who designed it?