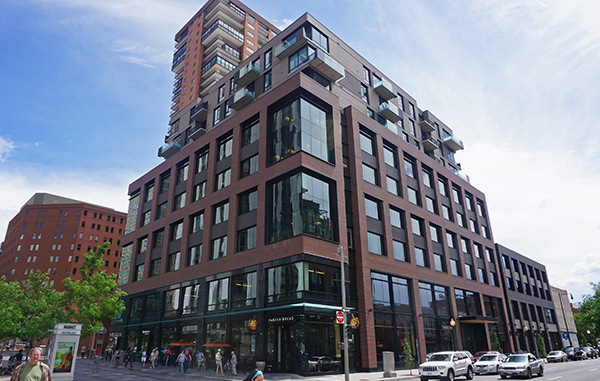 The 16M project is under new ownership. Photo by Burl Rolett.

A new owner has swooped in on a LoDo office and apartment building.

Chicago-based LaSalle Investment Management bought 16M, the company announced Tuesday. The property is a 10-story building at Market Street and the 16th Street Mall with 36 apartments and about 147,000 square feet of office and retail space.

The sales price was not disclosed, and no deed for the real estate was on file as of Tuesday afternoon.
LaSalle bought 16M from Denver-based Integrated Properties, which developed 16M between 2013 and 2014. 16M is LaSalle’s third Denver buy in the last few years. The firm bought Millennium Financial Center and a Writer Square office building in 2013. Those deals came to a combined $127 million.

Current office tenants at 16M include Morgan Stanley, D.A. Davidson and The One Group. Co-working company WeWork also named the building on a list of targets for a planned push into the Denver.

The building also has a row of first-floor retail space along the 16th Street Mall with tenants Panera Bread and Garbanzo Mediterranean Grill. Restaurant STK Rebel, operated by The One Group, is also slated to open at 16M this year.

The 16M project is under new ownership. Photo by Burl Rolett.

An apartment, office and retail building along the 16th Street Mall sold this week to a developer that recently spent $127 million on other local properties in the last few years.