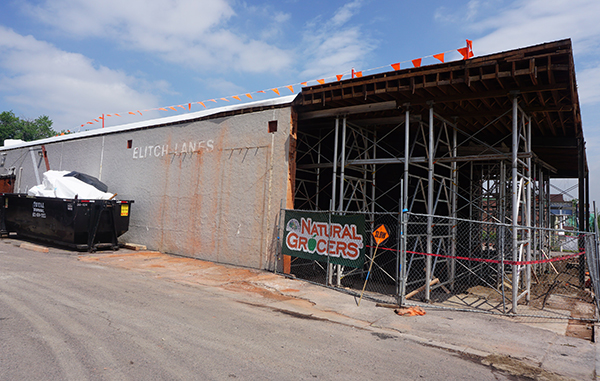 A former Berkeley bowling alley has been gutted to make way for a new grocery store.

All that remains of the long-standing Elitch Lanes on Tennyson Street is a shell. The building’s new owners are revamping the structure for food and vitamin shop Natural Grocers. The grocery store is scheduled to open in late September.

Natural Grocers will rent the building from Kansas-based Equity Ventures Commercial Development, which bought the property for $4.37 million in February. Construction started this spring and the finished store will run about 19,000 square feet, EVC President Mark McPherson said.

Elitch Lanes closed earlier this year after 63 years on Tennyson Street. The bowling alley’s owners were planning on taking over management duties at Western Bowl in Arvada, but that deal fell through in May.

Natural Grocers has hit a serious growth spurt: it plans to open 18 stores in a year. The company is relocating its Glendale store from 5231 Leetsdale Drive to a new building at the former Gunther Toody’s location at 4500 E. Alameda Ave.

Preparing for an aggressive expansion, a grocery store has a new Berkeley location underway in the longtime home of Elitch Lanes.