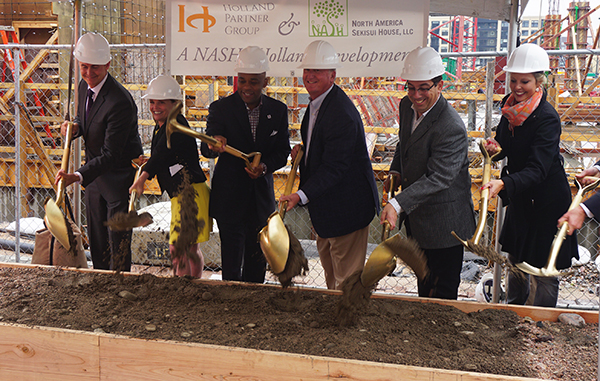 An apartment and retail project got its ceremonious start on Wednesday. Photo by Burl Rolett.

Another $240 million worth of apartments are on the rise near Union Station.

Holland Partner Group has started construction at Pivot Denver, a 580-apartment complex at 17th and Wewatta streets near Union Station. The project will also feature a 56,000-square-foot Whole Foods store on its ground floor.

The Washington-based developer is building the project in a joint venture with North America Sekisui House. NASH is also a lender on the project. Davis Partnership is the project’s architect, and Holland’s construction arm is the general contractor.

Pivot’s 580 apartments will be split between a trio of 10-story towers connected by a central amenity building with a fitness center, lounge room, theater, game room and several conference rooms. The towers themselves will sit atop a three-level above-ground parking garage with a fourth floor of parking below ground.

The project includes another roughly 11,000 square feet of ground-floor retail space aside from the Whole Foods that could be divided between three or four tenants. Pivot’s apartments are expected to be finished in April 2018 and Whole Foods is targeting a 2017 open date.

Pivot is the latest of several major apartment projects Holland has put up around Denver. In March, the developer opened Platform at Union Station, an $88 million apartment tower a block west of Pivot. And last month, it bought up another undeveloped Union Station lot at 1800 Little Raven St.

An apartment and retail project got its ceremonious start on Wednesday. Photo by Burl Rolett.