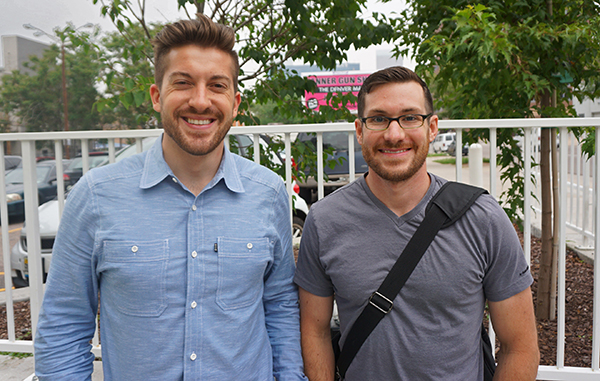 Bryan Gardner (left) and Dan Lucchesi are pushing a new version of their cycling startup. Photo by George Demopoulos.

This Denver duo isn’t trying to reinvent the wheel – just how you make it turn.

Former grad school classmates Bryan Gardner and Dan Lucchesi are in the midst of their second Kickstarter project, chasing $40,000 in funding to update their Fly Pedal, an adapter to that allows cyclists to ride on clipless pedals with street shoes.

“The (new Fly Pedal) has a lot of features that our customers have told us they want,” Lucchesi said. “The first version solved the problem. The new design refines the solution.”

Normally, riding a bike with clipless pedals requires specialized cleats that attach to the pedals’ locking mechanism. Fly Pedals attach to the bike pedals in the same way but create a flat surface that can be used with any shoes and that let the rider to hop on and off easily. The adapter will work for almost any clipless pedal system.

Gardner and Lucchesi have raised over $27,000 with 23 days left in their campaign. They’re confident that they’ll reach the project’s $40,000 goal and are now focused on reaching their stretch goal: to raise $55,000 and produce Fly Pedals in America.

It’s actually cheaper to produce and ship Fly Pedals in the U.S. because of tariffs, the duo said, in spite of higher initial costs.

When the pair founded the company in May 2014, they launched a campaign to raise $12,000 for molding and machining. They met that goal in 48 hours and went on to raise nearly $48,000. And they’re on their way toward matching that number the second time around.

“The amount of money raised per view (on the first campaign) is the same as what we’re raising now,” Lucchesi said.

Gardner said the cycling community has embraced the product. 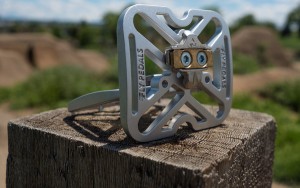 Fly Pedals work with all major brands of clipless pedals.

“Our experience has been that a large majority of people who have clipless pedals understand that this is a problem,” he said. “You don’t have to sell people on it; you just have to make them aware of it. The product sells itself.”

The first generation of Fly Pedals retail for about $40 and are available at All Bikes on Broadway, the Denver Bicycle Cafe on 17th Street, on the Fly Pedals website and on Amazon.

Gardner, 28, and Lucchesi, 32, met while attending business school at the University of Denver. Both have full-time jobs outside of Fly Pedals: Lucchesi works in real estate while Gardner develops online marketing software.

Lucchesi was struck with the idea for a clipless pedal adapter to solve issues he experienced while riding his own bike.

“Bryan had invented stuff before and told me about his inventive process,” Lucchesi said. “I ran my idea through the process and then I approached him about it. We talked about it over beers, and we’ve been working on it ever since.”

Italian cyclist Cino Cinelli invented clipless pedals in 1973 to replace the toe clip and strap common on racing bikes. The gadget was popularized over the next two decades and was released commercially after Frenchman Bernard Hinault won the Tour de France twice using clipless pedals in 1985 and 1986.

Bryan Gardner (left) and Dan Lucchesi are pushing a new version of their cycling startup. Photo by George Demopoulos.

After getting their bike pedal adapter off the ground with help from crowdfunding last year, two DU grads are raking in more support for version 2.0.