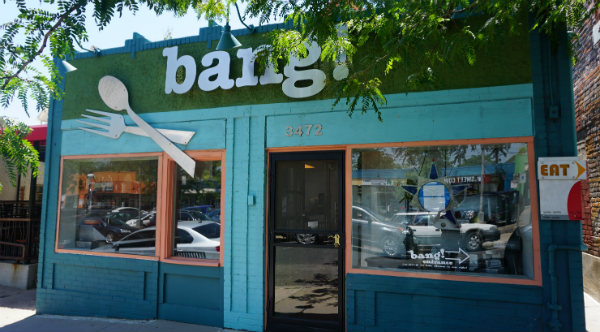 After nearly 19 years preparing Southern cuisine, a Highlands restaurant is hanging up the apron.

Bang! will close at the end of July, according to its owners, who are looking to lease the restaurant – they own the building – to another operator.

“We’ve been doing this for 19 years and we’re ready to move on,” said Chris Oakley, who co-owns the business with his brother Jeff Oakley and Cissy Olderman. “That’s pretty much our entire adult lives. We’re ready to try something different.”

So the trio will try being landlords. They’re searching for a tenant to lease Bang! at $5,000 per month. The 2,100-square-foot building comes with furniture, kitchen equipment and silverware.

Bang! is working with Re/Max broker Dan Jimenez on the space, which the restaurant bought for $200,000 in 1999.
The restaurant seats about 50, including indoor space and a partially enclosed back patio.

The building is the second location Bang! has occupied since the trio started the restaurant in 1996. Its original home was a few blocks away on 32nd Street in a former deli.

“Cissy happened to walk by a restaurant that was for sale in the neighborhood and that got things going,” Oakley said. “We pooled our money together, bought Lala’s and opened Bang! I want to say we paid like $30,000 for Lala’s.”
Bang! remained at its first location from 1996 through 2000, when it moved to its current home at 3472 W. 32nd Ave. Before Bang!, the building housed the Spot of Tea café.

“It’s really become a restaurant row in the last 19 years,” he said. “When we started, you could probably count the restaurants on one hand. The amount of restaurants has tripled or quadrupled since we’ve been here.”

Bang! was known for its Southern-themed menu, Oakley said. Jeff Oakley has cooked in restaurants in Texas and New Orleans, specializing in dishes such as gumbo, hush puppies and a shrimp po’ boy.

After nearly 19 years preparing Southern cuisine, a Highlands restaurant is hanging up the apron.