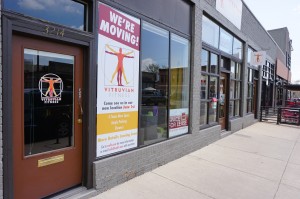 Vitruvian Fitness is moving west from the Highlands (pictured here) to Wheat Ridge.

It took Tom Wigginton, founder of the former Highlands gym Vitruvian Fitness, three months to find a new location for his studio. Now, he’s gearing up to open Vitruvian next month in a former boxing gym in Wheat Ridge – with over three times more floor space than his old digs on Tejon Street in the heart of the Highlands.

“I wasn’t excited till I came in over the weekend and started fixing the place up,” Wigginton said.

Last week, Wigginton signed the lease at 7605 W. 44th Ave. in Wheat Ridge. He selected the 3,500-square-foot location based on five factors: triple the floor space of the old LoHi studio, extra parking, an interior with a concrete floor, 12-foot ceilings and showers.

“Rent and space pushed us out of the Highlands. Everything is too small or expensive or both,” he said.

Wigginton employs three personal trainers and six group instructors, and said he plans to hire up to six additional trainers.

“Our focus is basically the restoration and enhancement of functional movement in people who need help in that area,” Wigginton said. “People come to us with some sort of movement illness, whether it’s chronic, acute or perceived. We help them move and feel well as a result of that.”

Instead of buying unlimited access to the gym, a Vitruvian member pays for a certain number of classes every four to six weeks.

Prior to the move, Vitruvian had 125 members. The new facility can support 350. Personal training brings in 70 percent of revenue, with group classes earning the remaining 30 percent.

“My goal is to begin opening a new Vitruvian every 18 months at a different corner of the metro area,” he said. “Ideally we’ll end up with four in the next six years. If it turns out that gets accelerated, we’ll open up more.”

Wigginton, 50, opened Vitruvian at its Highlands location in 2010. The Denver native worked in the restaurant and grocery industries prior to fitness.

Vitruvian Fitness is moving west from the Highlands (pictured here) to Wheat Ridge.