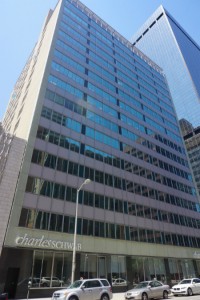 The Denver Club office building at 518 17th St. will get some upgrades now that a new owner has stepped in.

“Our intention is to invest a significant amount of capital into the building, and through that drive value by creating a little more modern, more desirable office for tenants,” Carner said.

The Denver Club building comes in at 24 stories and 231,454 square feet. It was built in 1954, and Carner said it is about 80 percent occupied. Major tenants include REIT Dividend Capital and Xerox State Healthcare.

The building sits just four blocks from 1660 Lincoln St., an office tower Unico bought for $38 million in 2013. That 20-story tower is undergoing its own renovation.

Unico has been rolling in Denver in recent years. Since 2011, it’s bought office buildings at 1512 Larimer St. and 1675 Larimer St. in addition to 1660 Lincoln and the Denver Club buy. Those four deals totaled more than $150 million.

The Denver Club office building at 518 17th St. will get some upgrades now that a new owner has stepped in.

Unico Properties this month bought the Denver Club building at 518 17th St. for $30 million. The firm plans several million dollars of upgrades for both common areas and tenant spaces.