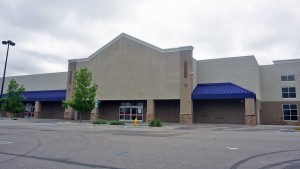 The former Lowe’s space is slated for redevelopment. Photos by Burl Rolett.

Wholesale club Costco is adding its first Colorado store concept that takes buying in bulk to the extreme.

The Costco Business Center on Alameda Ave. just east of Federal Boulevard, hopes to be open in a former Lowe’s store around October.

“If you go into a Costco, you buy things by the case,” said Mike Dobrota of Northwest Atlantic, who handles real estate for Costco. “At a Costco business center, you buy it by the flat (pallet).”

Dobrota said Costco will buy the 12-acre site in a deal scheduled to close in September. Costco is hoping to have its business center humming by Halloween. The company liked the Alameda Square location for its interstate proximity and access to downtown Denver.

Costco will fill an 118,000-square-foot building that hardware store Lowe’s shuttered in November 2011. Lowe’s operated for only about 1 ½ years as the anchor store at the Alameda Square shopping center.

The property sat dark for the last four years. It sold in May 2015 to Alameda Square Investors, LLC for $13 million. Richard Campbell, who is listed as the company’s registered agent and signed the deed on the company’s behalf, could not be reached for comment on the deal.

The building itself will be an easy conversion project for Costco. The company will need to upgrade the electrical system and do a little cleaning on the building’s exterior, Dobrota said. They’ll probably also paint the roof a Costco red.

“Once we get a building permit, we should be open in two months,” Dobrota said.
Costco Business Center is a wholesale distribution outlet that sells mainly to small businesses both out the front door and by delivery. The centers typically run about 115,000 square feet – about 35,000 square feet smaller than a standard Costco.

The business centers are open to individual consumers, but Costco’s business members make up about 70 percent of sales. Business centers don’t tend to stock purely consumer products such as apparel, jewelry, toys, housewares and books.

Costco Business Centers also lack a Costco pharmacy, optical center and food court. Dobrota said Costco has yet to decide if Alameda Square’s business center will have a gas station.

Costco currently has 10 total business centers nationwide. The nearest to Denver is in Las Vegas. Dobrota said it was very unlikely that Costco would build a second business center within Colorado.

The plan was unveiled Tuesday morning at a Denver Business Development Committee meeting and an Athmar Park Neighborhood Association that evening. At the evening meeting, neighbors asked if Costco could include a small grocery section, reasoning the nearest grocery stores are few miles away.

The Costco Business Center will employ between 150 and 200 workers at between $15 and $25 an hour, jobs councilman Chris Nevitt hopes will go to nearby residents.

“Costco is the anomaly in large-scale retail,” Nevitt said. “They pay well, they offer benefits, they have low turnover – these are good jobs.”

The former Lowe’s space is slated for redevelopment. Photos by Burl Rolett.

Wholesale club Costco is adding its first Colorado store concept that takes buying in bulk to the extreme. And it's going in just west of Wash Park.