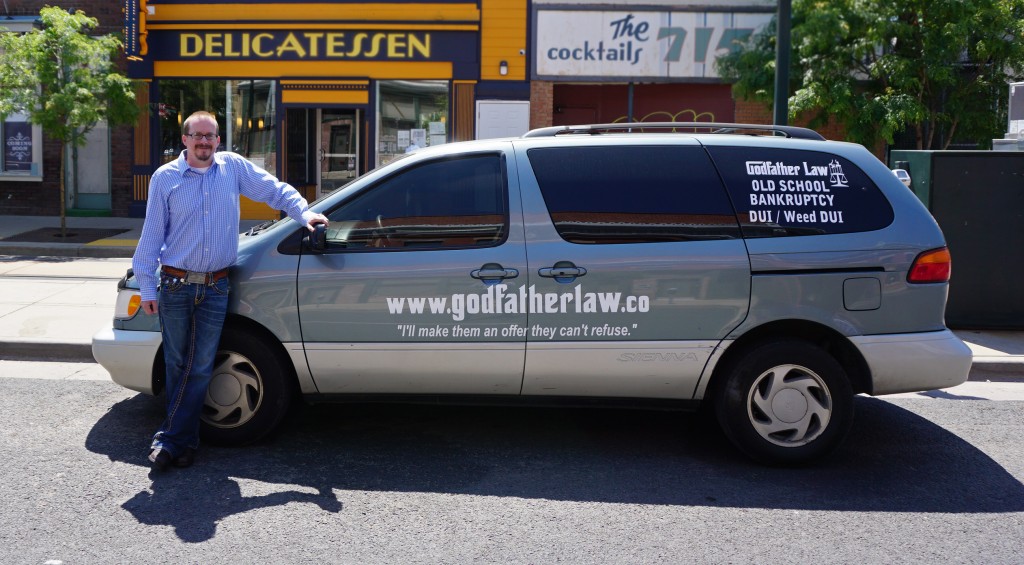 Lawyer Thomas Braham is making his clients an offer they can’t refuse.

The defense attorney, who specializes in bankruptcies and DUIs, isn’t sticking with the tried-and-true method of naming a law firm: a string of last names.

Instead, he’s rebranded his practice as Godfather Law.

“I was doing it kind of tongue-in-cheek – I married into an Italian family,” Braham said. “It gives a little bit more of my personality than another name.

“I did radio ads. That way I could just say, ‘See me on the Internet at Godfatherlaw.co.’”

Braham originally set out on his own under the name Abraham Law Group in 2010. On legal briefs, his name would appear as “A. Braham” (for “Attorney Braham”), and he said the name conjured up images of Abraham Lincoln.

He switched over to Godfather Law earlier this year.

Braham is unorthodox in his billing, too. He said he prefers to charge his clients flat fees rather than an hourly wage. He said he believes that it encourages clients to speak with him more regularly because they’re not being charged for it. And he doesn’t charge extra for taking a case to court.

Braham will still focus on the same areas of law – bankruptcies, DUIs and the emerging field of marijuana DUIs. He estimates that bankruptcy cases will make up 60 percent of his business, with alcohol DUIs coming in at 35 percent and marijuana DUIs taking the remaining 5 percent.

“The bankruptcy clients are usually a family with two kids, usually in their 40s or 50s,” he said. “They’ve had something happen in the last few years – loss of employment or overtime. There’s a specific event that just tanks them.

“On the DUI stuff, there’s a range of ages. Some people are 65 and never had a speeding ticket, then there are the kids in their 20s.”

Braham, who has an office at 1505 Osceola St., first arrived in Colorado in 1997 as an undergraduate Evans Scholar at CU Boulder. He grew up in the Chicago suburbs and landed a scholarship after a seven-year stint as a golf caddie, which he said helped prepared him for a career in law.

“A lot of (caddying) is about reassuring people and dropping their stress levels,” he said. “Law is the same thing. You say, ‘OK, I’ve handled this, why you are you freaking out about it? I’m carrying these bags.’”

From 2006 through 2009 Braham attended Cooley Law School in Michigan, the largest law school in the country.

He returned to Colorado as an intern at the Supreme Court Law Library in 2008 where he met his future wife. After clerking part-time at the Adams County courthouse for a few months, he worked as an associate attorney at the local office of Chicago firm Macey and Aleman before starting out on his own.