A new shopping center is planned for Stapleton next to an upcoming King Soopers. Images courtesy of City Street Investors.

As more Denver businesses look toward Stapleton, a pair of development firms is building a new spot for them to land.

City Street Investors and Evergreen Development are planning a new 22,000-square-foot retail complex at Eastbridge Town Center in Stapleton. City Street Principal Pat McHenry said they picked Stapleton for its strong demographics and a lack of food and shopping.

“Those are things that we look for when we go into neighborhoods,” she said. “We don’t go onto the Colorado Boulevards or out in the suburbs. Those areas tend to be over-retailed; we like to go places that are under-retailed and do something that enhances the community.”

City Street’s plans call for two buildings. The larger one will sit along the north edge of the site, backing up to Martin Luther King Jr. Boulevard. It will total about 14,000 square feet. A second 8,000-square-foot building will run along 29th Avenue just south of the larger building. 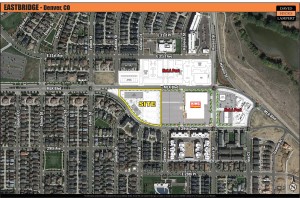 The development will have a walkway to the upcoming King Soopers.

“I live in Lowry and had a sense of living there what the neighbors wanted, which was more local restaurants, less chain stuff – something created for the neighborhood instead of something generic,” Vostrejs said. “We were successful enough in Lowry that we thought it would work in Stapleton, too.”

The Eastbridge project has lured two tenants so far. Restaurateur Troy Guard, owner of TAG Burger Bar, Bubu and Guard and Grace, is bringing his Los Chingones Mexican restaurant and an unnamed breakfast joint to the project.

McHenry said the larger of the two planned buildings lends itself to restaurants, while the smaller building will likely house more retail tenants. Right now City Street is looking for an independent coffeehouse and other local shops and restaurants to fill out the project.

Two restaurants have already signed on for the new shopping plaza.

City Street Investors is a Denver-based company founded by McHenry, Vostrejs and Rod Wagner. All three co-owners are also principals at Larimer Associates, which owns Larimer Square, developed Hangar 2 and was involved in the Union Station redevelopment.

Evergreen Development is based in Phoenix and builds retail shopping centers as well as multi-family communities.

The two development companies finalized their joint venture agreement a couple of months ago. McHenry said City Street is handling leasing, and Evergreen is in charge of construction.

Forest City Enterprises, the Ohio-based master developer at Stapleton, currently owns the land City Street and Evergreen will build on. Vostrejs said the joint venture is under contract to buy the parcel, and the deal should close in the next six months.

McHenry said they hope to break ground by November 2015. If construction runs on schedule, the first shops and restaurants could open between late summer and early fall of 2016.

A new shopping center is planned for Stapleton next to an upcoming King Soopers. Images courtesy of City Street Investors.

Two development firms are teaming up to bring more shopping and dining to Stapleton with plans for a 22,000-square-foot project near the upcoming King Soopers site.