A Golden company is hoping to push its injection system to more health firms in time for next flu season. Photos courtesy of Pharmajet.

A Golden medical device company is about to get a shot in the arm of new capital.

Ten-year-old Pharmjet is trying to make inoculations less painful for patients and safer for health care workers with its “needleless” syringes.

Each year, 800,000 needlestick injuries occur in the U.S., according to OSHA. Those pricks result in costly investigations and tests for healthcare centers.

Pharmajet has launched a $5 million fundraising effort to expand its business and hopefully get closer to turning into a profitable company. The company has raised more than $50 million.

“The money is going towards two things,” Pharmajet’s CEO Ron Lowy said. “One of those things is for clinical studies that will expand the available vaccines the device can deliver. The second is to expand our product offering to other extensions of the device, like a pre-filled syringe.”

The company has raised $3.75 million of its recent $5 million goal, according to a filing with the SEC. The funds are coming primarily through issuing debt to 41 investors. 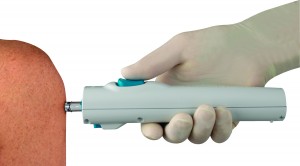 Pharmajet says its injector can dispense a vaccine in 1/10 of a second.

Pharmajet syringes were approved by the FDA in September and are on the market. The company is currently ramping up its production of syringes for next flu season.

The needleless syringes are made of plastic and are spring-loaded into a reusable injector. The injector dispenses the medication in a narrow, high-powered stream that penetrates the skin without a needle, cutting out the chance of accidental pricks. The injector is reusable, and the disposable plastic syringes save some of the hassle of carefully disposing of metal sharps.

Lowy said his product will appeal to patients who are afraid of needles and avoiding vaccines.

Lowy said Pharmajet’s safety syringes are one of the few needle-free vaccination options that doesn’t require drug companies to redesign the vaccine itself. That makes the device an attractive alternative to other safety syringes on the market.

“What we’re doing is proving our device doesn’t negatively affect the vaccine,” Lowy said. “That’s how we differentiate ourselves in the marketplace.”

Pharmajet hopes to break into the black in the next 12 to 24 months, he said.

A Golden company is hoping to push its injection system to more health firms in time for next flu season. Photos courtesy of Pharmajet.

The maker of a needle-free injection system is looking for a shot in the arm from investors, and it's already more than halfway to its goal.