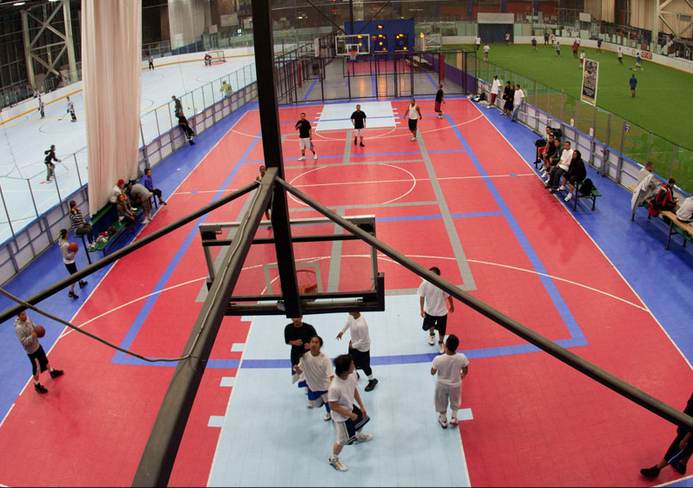 A Stapleton gym and sports facility is upping its space. Photos courtesy of Bladium.

After three years of prep work, a Stapleton gym is ready to start the heavy lifting on its $3 million expansion.

Denver’s Bladium Sports & Fitness Club will break ground on a two-wing 30,000-square-foot expansion this month. The $3 million project will add a third indoor soccer field and a CrossFit space and bring the total square footage to 83,000.

“We’ve always known we had to expand,” said Bladium’s president Brad Shook. “CrossFit has grown from a small space to take over our basketball court, and it needs its own dedicated space. We’re falling all over each other right now because it’s not big enough.”

The project will be financed by First National Bank of Denver.

“We originally had a much bigger development,” Shook said. “The price of construction came in over the budget, and we had to cut back.”

Construction will begin this month and be completed in the fall, Shook said. Bladium bought a second plot of land for the construction in 2012 for $293,000.

“We’ve been planning this for a couple years,” Shook said. “The (building) permits have just been finalized, so we’ll be breaking ground shortly. That’s kind of been the holdup – it’s been a process.”

Bladium’s clientele is split up into two groups: customers who come to play in one of the fitness club’s sports leagues and those who come to work out.

With that in mind, Bladium’s competition isn’t any single gym in Stapleton. Instead, Shook said, the fitness center’s main competitor is Stapleton’s Central Park Rec Center.

In addition to typical gym equipment, Bladium offers its members CrossFit classes, volleyball, basketball, soccer, lacrosse, yoga and barre. Memberships (without CrossFit) are about $30 per month, while CrossFit memberships range from about $100 to $120.

Located in a former aircraft hangar, Bladium opened in Denver in 1996. In 2000, the company opened a 100,000-square-foot location in Alameda, California.

A Stapleton gym and sports facility is upping its space. Photos courtesy of Bladium.

A large Stapleton gym and sports facility is bulking up even more with a $3 million 33,000-square-foot addition.