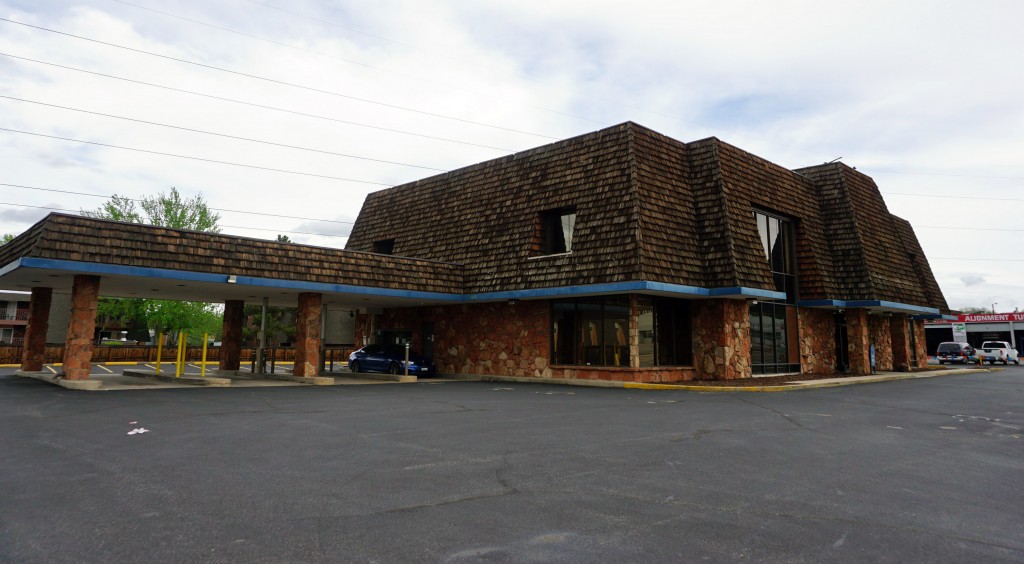 Advanced Cannabis Solutions plans to add a co-working office to the second floor of a former bank branch. Photos by George Demopoulos.

With Denver’s marijuana industry thriving, a large cannabis-centered company is getting in on another business trend: co-working.

Advanced Cannabis Solutions, a public company that also operates as General Cannabis, is diversifying its business model with plans to open a marijuana industry co-working space this summer called the Greenhouse.

And the company also expanded into the security business with the acquisition of Iron Protection Group in March.

Advanced Cannabis has focused on buying warehouses, installing grow infrastructure and leasing the properties to pot cultivators. That model changed when Advanced Cannabis moved to Denver from Colorado Springs.

“The co-working space is relatively new for us,” CEO Robert Frichtel said. “When we moved our corporate offices up to Denver, the shared workspace option became viable.” 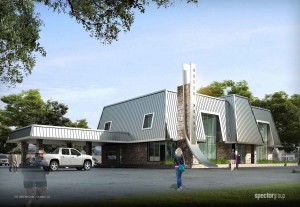 Advanced Cannabis Solutions bought a property at 6565 E. Evans Ave. in October for $1.05 million. The 15,000-square-foot three-story space is a former Bank of the West branch that closed in 2013.

The company plans to lease the first-floor space and move its office up to the second floor, which is being rebuilt as the Greenhouse co-working space. Iron Protection is headquartered in the basement, dubbed the “Canna-Cave” by Frichtel.

Frichtel anticipates opening the Greenhouse in late summer. He described the 5,300-square-foot space as similar to the Galvanize co-working space but geared specifically toward cannabis-related startups. It’ll also act as an incubator, where Advanced Cannabis can find potential investment opportunities.

“We believe that we’ll bring in tenants that could be working on concepts that we might be looking at as an early-stage investor,” he said.

Ideal tenants are companies ancillary to the pot industry, meaning they don’t deal directly with cannabis. Growers or retailers can rent space for executive offices, but there will be no cannabis allowed on-site. 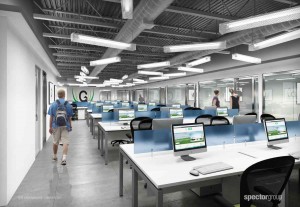 The space will have traditional offices as well as shared desk space for members.

Tenants will have two options to lease space at the Greenhouse. There will be eight offices, leased monthly and priced between $700 and $1,000. A membership, which allows access to shared workspace and conference rooms, will also be available, Frichtel said.

Frichtel is searching for a bank tenant to lease the ground-floor space, which has six teller windows, 2,200 safety deposit boxes and three drive-thru teller bays.

“The larger financial intuitions are the ones who are less likely to move into that space,” he said. “We’re more likely to see a regional or state bank to get involved in it. Here in Colorado there are still a large number of smaller banks.”

An existing bank would likely rent the space to separate its pot-growing clients.

“This way you don’t have grandma going in with her grandson cashing a birthday check in line in front of a guy with $100,000 cash to deposit from his marijuana store,” Frichtel said.

“I was looking for help on the business side of things and had a relationship with (Advanced Cannabis) for a while,” Garth said. “I approached them for support, and they approached me with an acquisition deal.”

Garth, a former Marine, founded Iron Protection in 2013 after two tours in Afghanistan and Iraq. After returning stateside, he worked for Merrill Lynch.

“I realized the missing piece for me was the brotherhood and camaraderie that was built in the military, so we set out to do something in the civilian world that would bring us back together,” he said. “We started off doing security consulting, and we saw that there was an opportunity in the marijuana industry.”

But even with these new undertakings, Frichtel said Advanced Cannabis isn’t giving up on real estate.

“While we’re still interested in real estate, I’m waiting for the overheated metro area to cool down,” he said. “Then we’ll find some new real estate.”

Advanced Cannabis Solutions plans to add a co-working office to the second floor of a former bank branch. Photos by George Demopoulos.

A Denver-based firm, whose focus has been renovating and leasing space for marijuana grow operations, is building a greenhouse of its own that will serve as a co-working space for other cannabis-related startups.