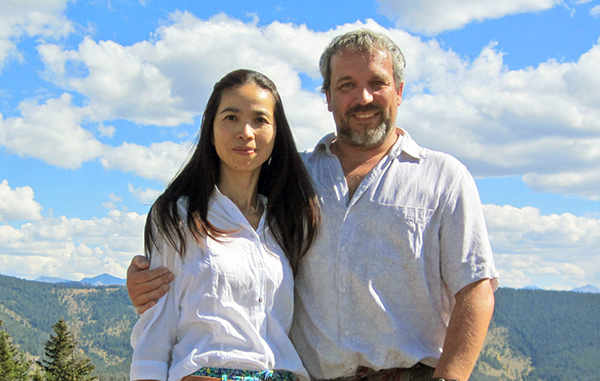 West Wash Park is about to get the Eastern European spa treatment.

“It comes with origins in Eastern Europe, where back in the 1800s they realized some salt miners were in really good health, specifically with respiratory things,” he said. “So they started to take people down into the salty environments to have them breathe the salty air.”

Customers need not rappel down a mine shaft to catch a whiff of salt. They’ll just pay $35 to hang out in a 400-square-foot den with walls and floors lined with so much Himalayan salt, Bohunovsky said, it’s measured in tons.

Patrons can read, meditate or even sleep through their 50-minute session. Bohunovsky said as long as they’re breathing, the salt clears out the lungs and nasal passageways, leading to better respiratory health.

5 Star Salt Caves will be the first spa Pham and Bohunovsky have launched. Pham teaches breathing exercises, and Bohunovsky said he’s worked at other spas over the last six years.

The couple moved to Denver from California about 3½ years ago. They got hooked on salt therapy during a trip to Bohunovsky’s native Austria. 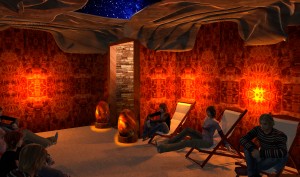 The spa will be built around the salt cave, a small room lined wall-to-wall with Himalayan salt.

“We were so taken by the experience of it,” Bohunovsky said. “We went there because it was in the winter and we had kind of a cold coming on that, after a couple of visits, really disappeared.”

About two years ago, Pham and Bohunovsky started working on a plan to launch their own salt spa in Denver. At the time, Bohunovsky said he was unaware of any other salt spas operating in the area.

The team had hoped to open in Denver much earlier, but Bohunovsky said they struggled to find a space to lease. They eventually settled on a 2,000-square-foot space formerly home to bike shop Cycle Analyst.

Bohunovsky said he likes the location because other spa-type businesses have thrived in the neighborhood.

“When we moved to Denver, we were in the Platt Park area right next to South Pearl Street,” he said. “It’s just a neighborhood that has some affinity for some of these more alternative treatments already.”

The cave will be the centerpiece for 5 Star Salt Caves. The spa will also offer an infrared sauna and ionic foot baths. Bohunovsky and Pham are also planning to set aside an area for small yoga classes or other group fitness activities.

Bohunovsky declined to disclose what the spa would cost to build, saying only that the number was more than $100,000 but less than $1 million. Arrow B Architecture is designing the space and E4G Contracting is the general contractor.

Right now there are at least two other salt spas in the Denver area, including the Salt Spa in Lakewood and RockSalt Spa on 44th Avenue in Denver. Bohunovsky said he hopes his cave of salt will set 5 Star apart from its competitors.

Still, with a relatively new concept, he realizes the venture isn’t a sure thing. Halotherapy is very popular in Europe, but Bohunovsky said European customers also tend to spend a lot more money taking days, weekends and even vacations at a spa.

He was encouraged, however, by successful salt spas stateside in Chicago and along the East Coast. Bohunovsky also added that at $35 an hour, customers won’t have to pay a ton of cash to give salt therapy a try.

“It’s always a risk; it’s a new thing, but I think it’s one that has a few advantages,” he said. “It’s not a treatment that needs you to take a big leap of faith – there’s a lot of research on the benefits of it. There’s also the simple benefit of spending an hour of quiet, in a beautiful environment and taking a rest.”

Wash Park West is getting a taste of a European health trend with a new spa built around a salt cave - a small room lined floor-to-ceiling with Himalayan salt, said to improve respiratory health.

What is a salt spa and what does it do for you?

Salt Therapy is said to have a number of benefits, primarily for your respiratory system and also the skin. It was (re-) introduced in the west when a polish physician in the 19th century discovered that men working in the salt mines at Wieliczka suffered fewer respiratory problems than the general population. Eventually they established a spa in the salt mine. The environment of a (artificial) salt cave also has the benefit of a high number of negative ions in the air. It is an experience comparable to spending a few days on a beach. check out http://www.5starsaltcaves.com for some more info.

There is no parking on Pearl St and residents don’t need another spa in that area, plus there are two workout facilities already on Pearl. Waste or money to build out and leave in a year.