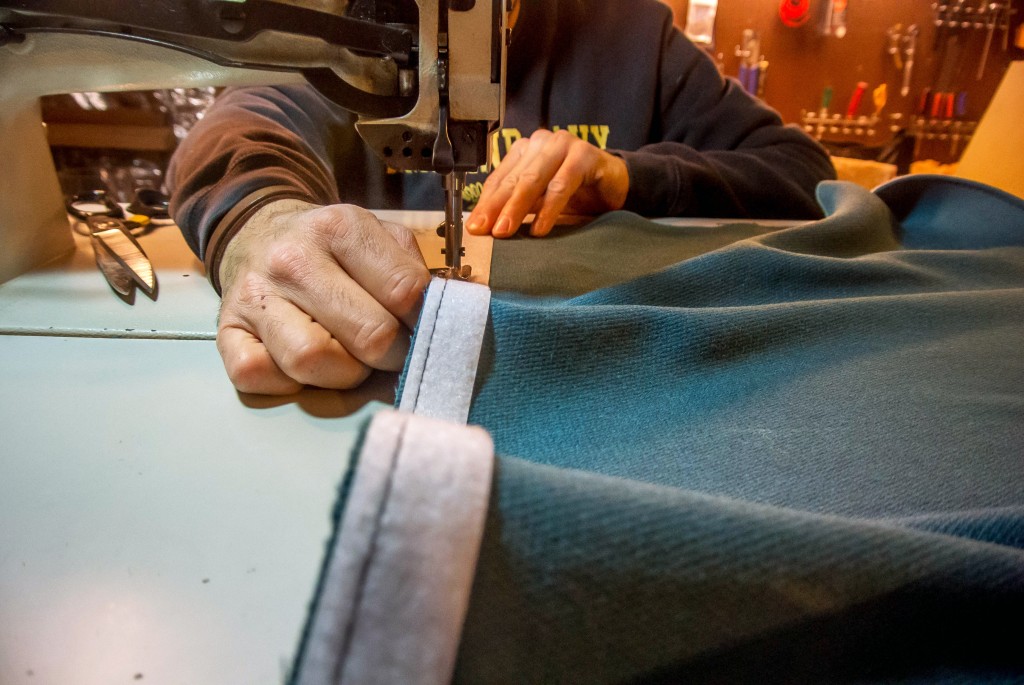 Furniture designer Osiris Graves, who is helping get a new startup off the ground, works on a climbing crash pad. Photos by George Demopoulos.

A lot can happen during a 16-hour road trip.

While driving back to Denver from a rock climbing trip in California, husband-and-wife duo Kyle and Kim Vine designed a bouldering crash pad made out of hemp. And they sketched out their whole business plan.

Kush Climbing’s first product will hit the market in May with a batch of 30 pads.

“No one else has used hemp,” Kim Vine said. “We wanted to lean in that direction, especially being in Colorado.”

Crash pads, which rock climbers use to cushion falls while climbing without harnesses, are traditionally made out of nylon. Kush Climbing crash pads are made with hemp instead, using interchangeable top panels that can be replaced in the event of wear or tear. 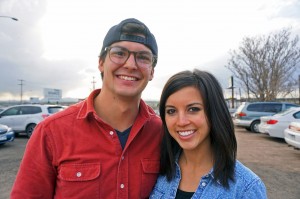 That’s an improvement over traditional crash pads, the pair said, which need to be replaced entirely if the top canvas wears out.

The Vines, both 27, wrote out their plan in the back of a climber’s guide to the Joshua Tree National Park, and they’ve got ambitious goals.

By May 1, they want to have 30 pads ready to sell. They’ve received some interest and anticipate that they’ll have to fill between six and 12 preorders in May. They’ll sell the remaining pads on their website for about $300 each.

Retailer distribution will come next. Nothing’s finalized yet, but the company plans on starting small by getting the pads in stores that already cater to rock climbers, like Wilderness Exchange and Boulder’s Neptune Mountaineering.

To raise interest in the product, the Vines are sending pads to nine climbing gyms in California and two in Utah by mid-May.

They are financing their initial production out-of-pocket. They’ve spent $400 so far on materials imported from China. 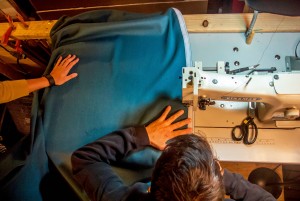 Kush Climbing hemp crash pads will sell for about $300.

They’ve done all of their manufacturing by hand with the help of friend Osiris Graves, who owns industrial sewing equipment.

But they realize that they can’t go it alone forever, Kyle Vine said.

“After the initial launch here in May, we’re going to look to do a Kickstarter,” he said, adding that he hopes to raise $15,000.

The company plans to start outsourcing manufacturing as early as next month, depending on how well the pads sell.
“We’re using an upholstery company,” Kyle said of their outsourcing plans. “To me, crash pads are upholstery. You have threads and foam – it’s upholstery.”

Kyle and Kim are already making plans to expand beyond crash pads. They’re designing other soft goods like backpacks and coolers to sell through the Kush Climbing brand but don’t have a release date for those yet.

The pair met while attending college at Louisiana State and moved to Colorado in January 2012 in search of mountains and work opportunities.

Furniture designer Osiris Graves, who is helping get a new startup off the ground, works on a climbing crash pad. Photos by George Demopoulos.

On a long road trip, Kyle and Kim Vine hatched a business plan that combines their love of climbing with the growing hemp industry. Now, the pair is about to debut its first product: a hemp-based crash pad for free climbers.