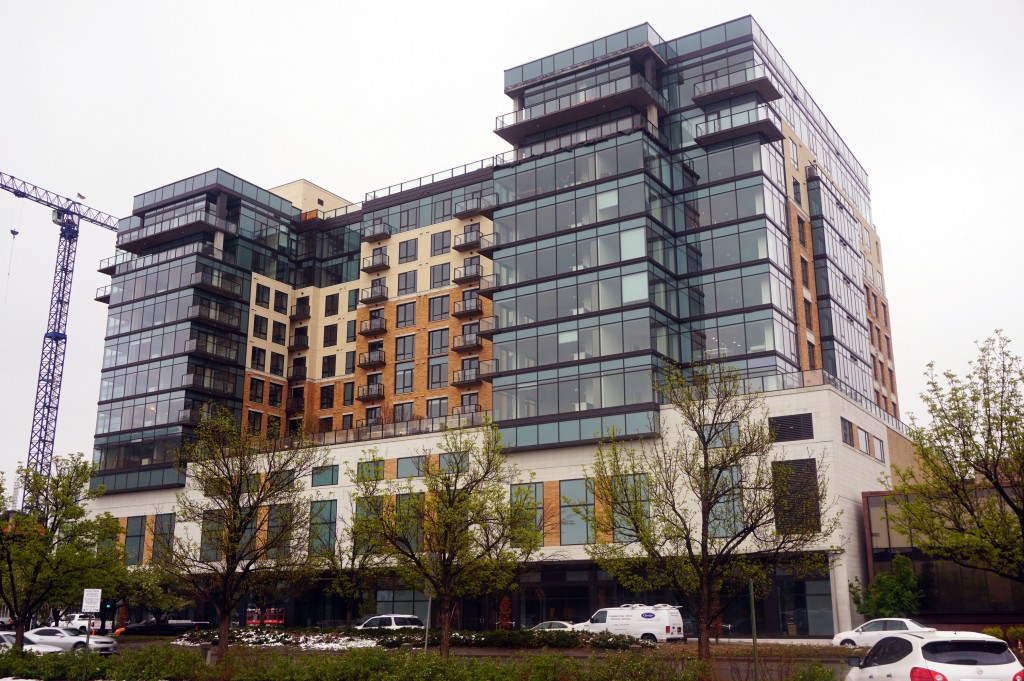 “People say, ‘I can move in and pay rent for as high a quality as any house I’m going to buy, I get all these amenities, all these services, all the security, maintenance-free,’” he said. “‘And at the spur of the moment, I can go online, get a ticket, go to the airport and leave without making any arrangements.’”

Rent rates listed on the building’s website have the cheapest studio at $1,675, or about $2.72 per square foot. The priciest two-bedroom is listed at $6,225 per month. Amenities include a 24-hour concierge, rooftop pool, private lounge and a 24-hour fitness center.

Joblon declined to disclose exactly how many units are spoken for, saying only that a “large percentage” of the building is preleased. The bigger, more expensive apartments have been going much faster than the smaller units, he added.

Joblon said he expected leasing to be more balanced across the unit sizes, but attributed the trend to more established, wealthier renters being more prepared to commit to a high-dollar lease earlier on.

“We’ve been preleasing for five or six months now, and a lot of that was from the beginning,” Joblon said. “And the rents are really high, relatively speaking, because of the quality of the building, the location, the amenities, so I think that people a little more financially established are having an easier time with the decision.”

Joblon, noting that younger renters tend not to plan so far in advance, expects the pace will begin to even out as more potential tenants come through for tours. At first, BMC anticipated it would take until April 2016 to lease the entire building. Now Joblon is anticipating the building will fill up by the end of the fall.

Steele Creek took about 16 months to build. Haselden Construction was the project’s general contractor, The Housing Studio was the architect and Rottet Studio handled interior design. Highlands Ranch-based REIT UDR financed Steele Creek with a $92 million loan, according to media reports, and will handle property management at the complex.

With one Cherry Creek development project completed, BMC is turning its attention to its 245 Columbine project, a 155-room hotel under construction about six blocks west of Steele Creek. Sage Hospitality is on board to manage the hotel, which Joblon said will be a new independent brand.

A new $108 million apartment project in Cherry Creek opened its doors to renters this week, and based on the influx of tenants, the developer expects the building to be fully leased before this winter.

Good article. This is ground breaking territory for Denver. Keep up the good reporting!