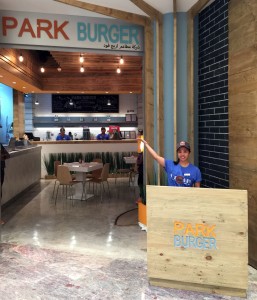 The Denver burger chain opened its first franchise in Kuwait last week, and the restaurant’s success could lead to more locations outside Colorado.

The 1,400-square-foot store cost about $500,000 to open, according to co-owner Abdullah Alghanem. Financing for the project was supported by the Kuwaiti government.

Alghanem and his business partner Fahad Alsebaie got the idea to bring Park Burger home to Kuwait while they were undergraduate students at the University of Denver.

“We had most of our meals at restaurants, but our favorite was Park Burger on Pearl Street,” Alghanem said. “It’s safe to say we were addicted to it. We saw the opportunity to bring our favorite restaurant back home.”

Alghanem and Alsebaie met with Park Burger’s owner Jean-Philippe Failyau and its operations director Peter Newlin and discussed the idea of opening a franchise in Kuwait. Failyau and Newlin traveled to Kuwait last summer to assess Park Burger’s viability there.

“We liked the idea and saw the opportunity, so we took it,” Newlin said. “We’re excited to see how it turns out.”

The Kuwaiti duo found a third partner in Fahad Alrefae and opened Park Burger in Kuwait’s capital on April 10.

The location’s menu was slightly tweaked to appeal to religious and cultural differences in the country.

“We’re utilizing a lot of fresh fruit, and we have a full juice bar in the restaurant,” Newlin said. “As far as bacon and other things like that, we’re using beef bacon. We developed some house-made sauces as well.”

There’s a lot riding on the success of the Kuwait Park Burger. The company is keeping tabs on the location’s performance to assess the viability of franchising.

“We want to focus on making sure that this one is a success and then go from there,” Newlin said.

But Alghanem and his partners are optimistic.

“We are planning to spread all over Kuwait and open more and more branches,” he said.

Park Burger opened a location in the Middle East last week, and the restaurant could be a jumping-off point for more restaurants.