In 2011, the only place you could buy a pound of pot online was Silk Road, an illegal marketplace labeled by the media as the “Amazon of drugs.”

In 2015, there’s a website run by veteran commodity traders where Colorado growers and retailers can trade cannabis online – legally.

The Denver-based company Amercanex launched its online marketplace last summer, and it has plans to expand outside of Colorado by the end of 2015.

“We’re emulating an exchange from Wall Street,” said Robert Ruiz, Amercanex’s chief marketing officer. “We feel like this is a commodity. That’s what we’re looking at. The reason we call ourselves Amercanex is to be the first American cannabis exchange.”

But while brokers in Manhattan deal in stock, Amercanex members trade pot at wholesale prices. Growers list their product by strain and price, and buyers seek the best deals for retail. The website lets browsers set search parameters by strain, price, THC content or vendor. And purchases are made with the click of a button.

Amercanex is currently only available to the Colorado pot market, but Ruiz said that the company intends to expand its territory into Oregon, Washington and California by the end of the year. 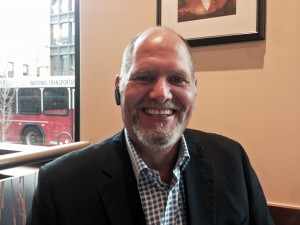 “Until the Feds make it legal, transactions can only happen intrastate,” Ruiz said.

Amercanex also takes a 7 percent cut of each transaction. The exchange doesn’t handle the product, so it’s up to the buyer and seller to transport the goods.

“We signed with them just recently,” said Josh Ginsberg, the CEO of Native Roots. “It’s nice to see some legitimacy on the wholesale platform that will give us a picture of what the market’s doing.”

Ginsberg said he plans on listing 1,000 pounds of cannabis to sell through the exchange.

Until last October, growers were limited to selling just 30 percent of their total crop wholesale. Both medical and recreational marijuana stores had to adhere to “vertical integration” standards set by the state. These standards dictated that a company could not buy or sell more than 30 percent of its total production.

On October 1, 2014, that restriction was lifted from recreational stores (it still applies to medical dispensaries). Suddenly, buying and selling weed wholesale was a viable business model.

Kevin Staunton, a manager at marijuana testing company CannLabs, said the new change in the law will lead to more wholesale.

“You’re less bound to grow what you sell,” he said. “As that piece continues to evolve, providers are going to specialize in either cultivation or retail. There will be less vertically integrated companies, so there will be a more vibrant wholesale industry.”

And in a bid to help quality control, Amercanex will utilize information from StrainData, an online platform listing strain potency and contaminants designed by CannLabs, in the next month. Amercanex currently lists THC content of strains, but that information is provided by the seller.

“We have an arrangement in place where CannLabs clients who are also using the Amercanex platform for wholesale can send their data to Amercanex,” Staunton said. “That gives confidence, especially on the buyer’s side. Buyers in particular will have more confidence to buy cannabis on the wholesale exchange.”

With state regulations on marijuana sales loosened late last year, growers and sellers are joining an locally based online exchange for wholesale pot.