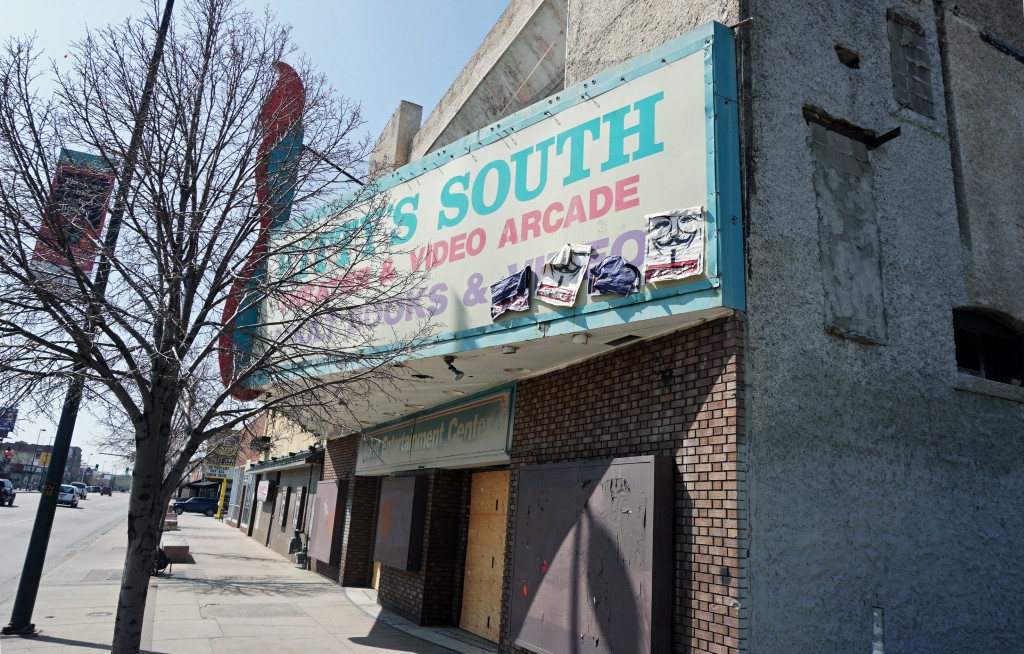 The former Kitty’s South space, vacant for about eight years, has been put up for sale. Photos by Burl Rolett.

A remnant of South Broadway’s seedier past is up for sale.

The long-shuttered Kitty’s South adult entertainment center is on the market for $2.7 million, the building’s owner, Maury Handler, confirmed. The building, a century-old movie house once known as the Webber, has drawn a flood of interest since hitting the market April 3.

“We’ve talked it over, talked about selling the theater, and that’s what we’re doing,” Handler said. “We decided to put it out on the market and we got three LOIs (letters of intent) on the first weekend.”

Up for sale are two parcels at 101 and 119 S. Broadway. The first is a vacant lot at Broadway and Bayaud Avenue and the second is the theater, a 7,372-square-foot building that dates back to 1915, according to Denver property records.

The property is currently owned by Handler Family Partnership I LLLP, according to city records, and has been in the Handler family since at least 1997 when Norman S. Handler granted it to a Norman S. Handler Revocable Trust.

Maury Handler said the partnership has almost sold the building three times in off-market deals. Each time, he said, the building went under contract at full asking price but the deals fell through.

“There’s no property left in Denver; it’s like a shortage of property,” he said. “You look at Loopnet or Costar, for example, and see the sum total of what’s on the market – that’s one of the best listings in the whole market.”

Larimer Associates itself owns a building at 42 S. Broadway, where new restaurant Cho77 recently opened, Vostrejs said, and the Kitty’s building could take on several different types of tenants.

“We’re really, really bullish on that section of Broadway,” he said. “Getting this building, which is a significant one, redeveloped would certainly add to the mix down there.”

The building’s ceilings are probably tall enough to hold a brewery, he added, and the property could also be a good fit for a shared office concept or some sort of multi-tenant retail or restaurant redevelopment.

“It would be cool to see a European-style food hall,” Vostrejs said. “It’s probably big enough to hold a brewery or a distillery with its high ceilings and open space.”

The former Kitty’s South space, vacant for about eight years, has been put up for sale. Photos by Burl Rolett.

Steve, I guess I understand your confusion, and I’ll try to help you out. You see, the words “seedier” and “seedy” are colloquial terms which describe varying degrees of degradation in a neighborhood. In this case, the author is referring to the fact that the blocks of South Broadway between Second and Alameda used to be a good place to cop heroin or pleasure oneself in a theater, and now it is generally thought of as a place to have a cocktail in the afternoon, or spend a hundred bucks on dinner, or take a stroll down the sidewalk with… Read more »