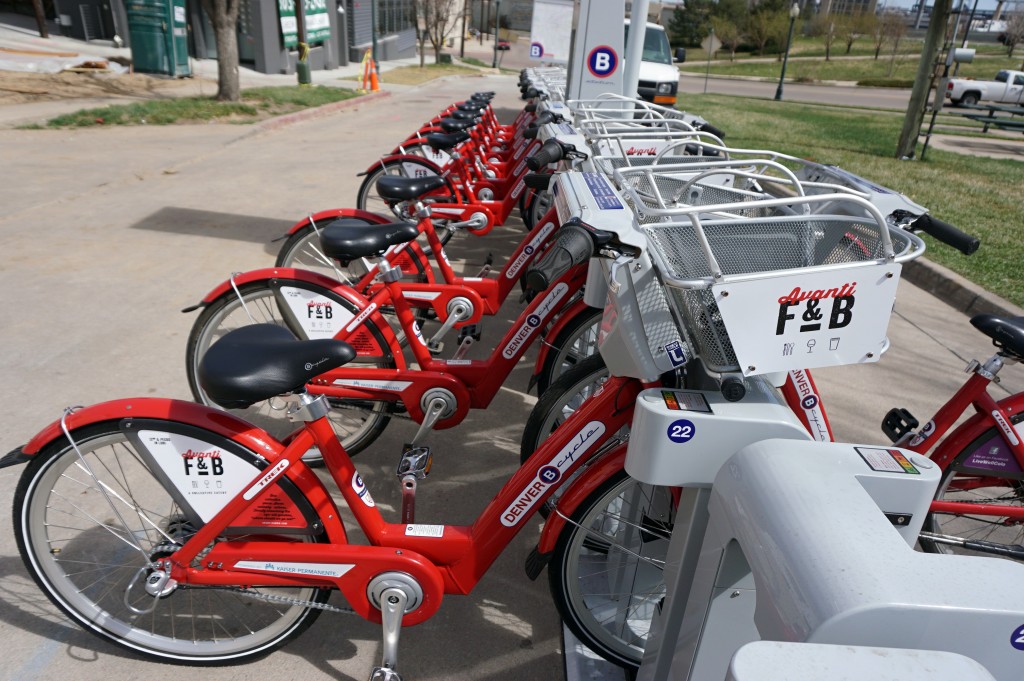 A 30-bike B-Cycle station has been installed near an upcoming restaurant development. Photos by George Demopoulos.

An upcoming LoHi restaurant incubator spent more than $50,000 to install Denver’s largest B-Cycle station in an attempt to lure customers from outside the neighborhood.

Restaurant incubator Avanti Food & Beverage – which will have seven different vendors selling arepas to shawarma when it opens in June – paid $55,000 to have Denver B-Cycle install a 30-bike station last week at 32nd Avenue and Osage Street. It’s the first B-Cycle station to be entirely privately funded.

“When you build bike stations and paths, you encourage people to look for alternatives and leave the car at home,” Avanti co-founder Robert Hahn said. “Then, there’s no parking issue because there aren’t any cars.”

Parking spaces for cars are few and far between in the largely residential neighborhood.

Hahn said he included the expenditure in his budget for Avanti because he anticipates luring customers from around Denver who can pedal over.

“It’s a gateway between the Highlands and downtown,” Hahn said.

“Basically what happened is (Avanti) looked at the area and saw parking concerns and came to us with a development plan,” she said.

That plan called for building the kiosk on a small concrete plot between Avanti and Highland Gateway Park.

“It made sense,” Baldwin said. “You can either fit 30 bikes in there or four cars.”

The station’s price tag includes not only the kiosk itself, but also the bikes and the solar panels that power the station. The bikes are built by Trek.

“It’s a challenge to keep the solar stations up and running through every season,” Baldwin said. “But it makes for a much shorter permitting process.”

“This type of partnership will be critical to our expansion,” she said. “I don’t know if we’ll be going on a 30-station expansion in the next three or so years. Going ahead with these types of projects are good for us, because then you’ve got the neighborhood and businesses behind it.”

A 30-bike B-Cycle station has been installed near an upcoming restaurant development. Photos by George Demopoulos.

The seven-restaurant Avanti development has rolled out Denver's largest shared bicycle station - in hopes that minimizing parking woes will bring in more diners.