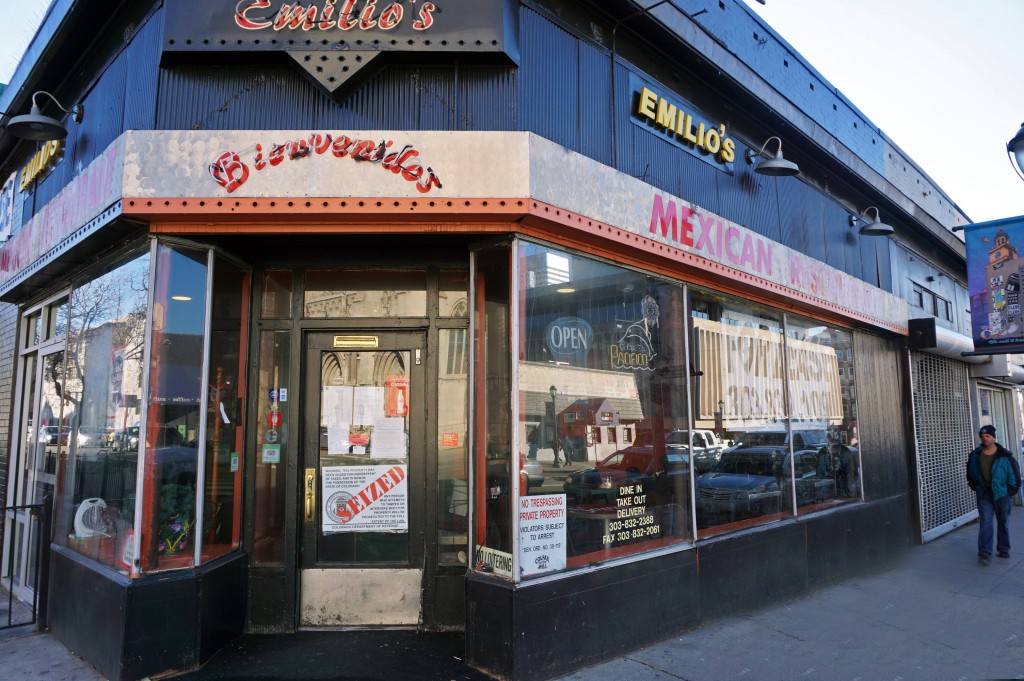 A Colfax Avenue restaurant has been closed by the state. Photos by Burl Rolett.

A Colfax restaurant has been locked out and is facing more than $25,000 in bills from its landlord and the state of Colorado.

Emilio’s Mexican Restaurant at 338 E. Colfax Ave. has shut down and owes nearly $12,000 in unpaid sales taxes, according to signs posted on the building by the Colorado Department of Revenue.

The lights are out, but much of the restaurant’s equipment is still inside the building that is now on the market for lease.

Emilio’s paid $5,500 in monthly rent, according to a sign posted by the building’s owner C&L Acquisition LLC. The landlord is also coming after Emilio’s for another $13,700.

Emilio’s owner Andrea Armas could not be reached for comment. She launched a campaign on crowdfunding website GoFundMe.com earlier this month seeking $25,000 to keep the restaurant in business.

On the funding website, Armas writes that the restaurant “fell too far behind” on its taxes and was shut down by the state.

A Colfax Avenue restaurant has been closed by the state. Photos by Burl Rolett.

A restaurant along East Colfax Avenue has been closed by the state for falling behind on more than $12,000 in property taxes and is also under fire from its landlord.

This was an amazing restaurant with great people and amazing food!! The owner tried her best to keep the community happy and well feed with cheap prices!! It’s sad to see this place go it was my job and my home for 7 years. Things happen for reasons that only certain people need to know!!

This is so sad. My friends and I love this place. The food and staff are incredible and even grew close like family. I hope you find the funding to stay open and keep serving those delicious chicarrones and margs!

I really liked that place. The atmosphere was much more intimate than Benny’s or the other places. I hope they reopen.