Four Denver entrepreneurs think there is room for one more social network where users with similar interests can connect and post events.

And TwoNoo will now feature a function that lets users filter through its subscribers by skill level. For example, if you’re organizing a ski trip, you can set the event’s skill level to attract advanced skiers and weed out novices.

The site also added a Twitter-like “follow” system, where one user can subscribe to others to receive updates on events they are planning.
“The site is purpose-built for connecting people with common interests,” Keefe said.

The site also makes it easier and cheaper for users to post events. 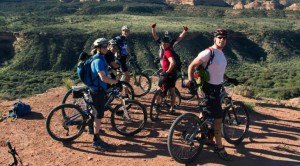 TwoNoo members on a bike trip. Photo courtesy of TwoNoo.

“If you compare us to Meetup and other sites like that, the big difference is that we’ve eliminated a lot of the hassle associated with building a following, not to mention the high cost,” Keefe said.

For now, TwoNoo’s only income is event creation. But Keefe said the company may eventually begin hosting ads on the site.

“It’s something we’ll look into as our user base grows,” he said. “We’ve also discussed implementing a subscription model for businesses to use to connect with their demographics.”

That tool would be similar to Facebook’s in which a user pays to get its content in front of more eyes.

Keefe and his business partners have financed the project themselves and invested between $5,000 and $10,000.

TwoNoo has garnered about 300 users since it launched in October 2014. Keefe said he’s seeing about three to five events planned per week.

“I’d say the most successful events we’ve had are volunteering activities,” he said.

Keefe said that the site’s territory is predominantly Denver and Pittsburgh. Its target user is 25- to 45-years-old, single and new to the area.

“As we expand, we’ll go after certain niche demographics like athletes or businesses,” Keefe said.

Volunteer opportunities, kickball games, crawfish boils and cookie decorating parties are a few examples of events being posted on a startup website that combines some of the functions of sites like Facebook and Meetup.