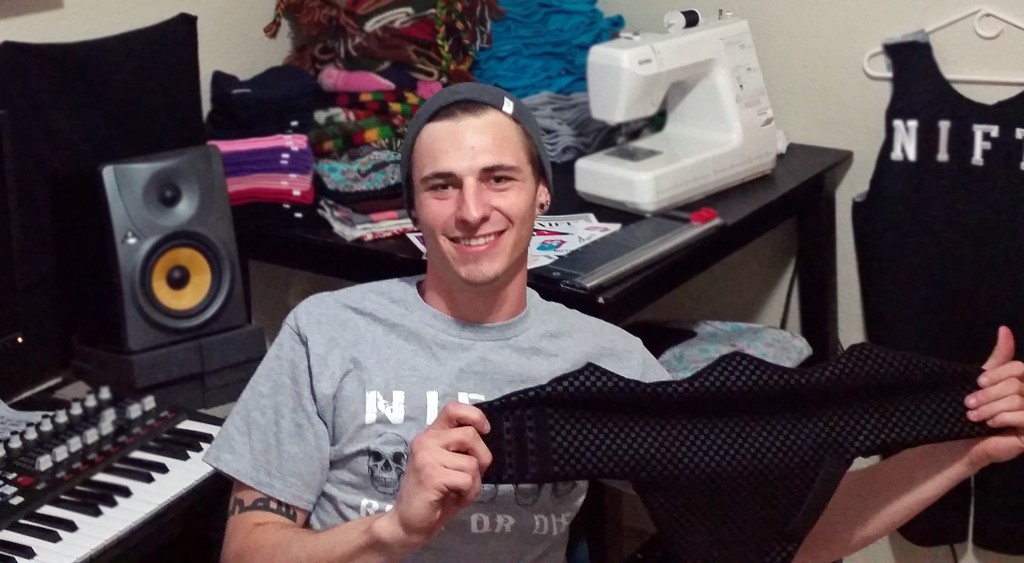 Caleb McGraw, co-owner of Nifty Snowboard and Street clothing, launched his new outdoor brand out of his Arvada home, selling hats, shirts, face masks and socks from a new website.

The idea for Nifty began when McGraw, 23, started designing his own face masks for snowboarding.

He couldn’t find any masks on the market that he liked and decided to make one himself. He grew up sewing his own Halloween costumes as a kid.

“My mom was a Deadhead, so that’s where I learned to be creative,” McGraw said.

McGraw, who is a roofer by day, is involved in nearly every facet of the business: He designs the clothing, programmed the Nifty website and markets on social media. He sews many of the products himself except for hats and T-shirts.

McGraw runs Nifty with his business partner, Pukar Pyakurel. He met Pyakurel while the two were working as clerks in a law office in 2012. After nine months of working together, the two were laid off with the rest of the office staff in a corporate restructuring.

McGraw and Pyakurel stayed in touch and began sowing the seeds for what would become Nifty in mid-2014.

Pyakurel’s family is from Nepal and has connections with the wool industry there. Nifty’s winter hats are all made from Nepalese wool. McGraw said the imported wool will set Nifty apart from its competition.

Nifty’s website went live in December. It’s currently the only place where Nifty products are available. McGraw says that he won’t seek an expansion into a storefront until demand begins to pick up.

McGraw has used social media as a platform to reach out to athletes whom he sponsors with free gear.

“I like finding athletes who are good but may not be at the pro level yet,” he said.

“I want to find that kid who can shred something crazy on a unicycle,” he said.

McGraw has big plans for Nifty in 2015. He said he hopes to attend industry trade shows and popular festivals like Taste of Denver to begin networking. Additionally, Pyakurel will be visiting Nepal over the summer to work on hat designs there.

McGraw has also been working on designs for board shorts and hoodies for release later this year.

An Arvada entrepreneur is getting his retail startup off the ground with handmade ski masks and hats made in Nepal. And he has plans to ramp up production throughout the year.