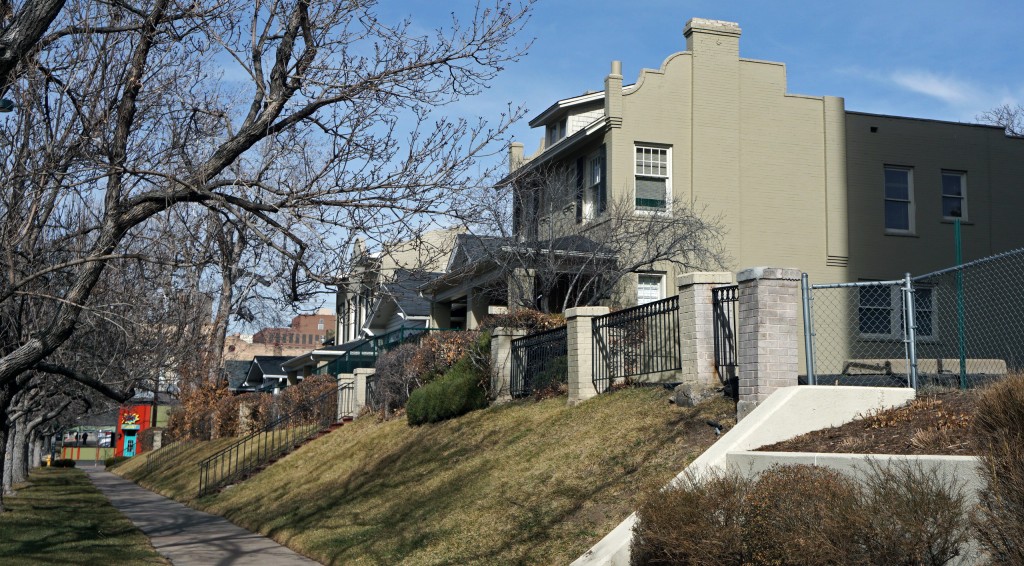 A stretch of buildings along Grant Street are set to be demolished. Photos by Burl Rolett.

After a two-year battle, a handful of landlords in Cap Hill have sold their properties to make way for an eight-story apartment project abutting Trader Joe’s.

Denver-based SmithJones Partners bought nearly 1 acre of land in November at the southeast corner of 7th Avenue and Grant Street for about $4.7 million. The company, which is also building an apartment project in Cherry Creek, plans to raze a row of small, decades-old office buildings and start construction in 2017.

The project will have about 178 apartments, units that SmithJones principal Jeff Jones said he hopes will appeal to renters who are somewhere between starting out in a first apartment and settling down with a home of their own.

“I would characterize it as kind of a midmarket – it’s not so much a 25-year-old, but it’s also not a 38-year-old,” Jones said. “(Renters) will still have some price sensitivity, so the units are a little smaller than average, and the mix is oriented more toward single people than couples.”

The project site covers 0.8 acres stretching south from 7th Avenue and backing up to the Trader Joe’s grocery store at 7th and Logan.

The unnamed SmithJones apartment building will total about 180,000 square feet with between 3,000 and 5,000 square feet of restaurant or retail space facing 7th Avenue. It will also house a fitness center and a pool.

About 75 percent of the apartments will be studio and one-bedroom units, Jones said. The remainder will have two bedrooms.

SmithJones has yet to nail down target rental rates for the units, and Jones declined to share an estimate for the total cost of the build. SmithJones valued the project at $50 million in a conceptual plan submitted to the county last summer. 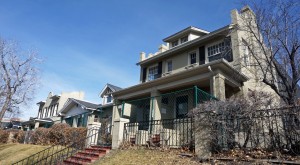 Several property owners had to come together to accommodate the sale of the strip.

SmithJones began to pursue the 7th and Grant project between June and July of last year, Jones said. Another developer had planned to build on the land, Jones said, but decided not to pursue the project and last summer told SmithJones the property would become available.

Jones said the location near several restaurants and a new Trader Joe’s will draw future tenants.

SmithJones closed on the land in November in a series of property transfers involving eight parcels, six different owners and a common homeowners association of sorts.

Bobby Kline of David, Hicks & Lampert Brokerage handled the deal on behalf of the sellers. Kline has sold and leased properties in what he called the “mini business park” along Grant Street off and on since 2007.

The deal was set in motion after a single owner approached Kline to sell his property. But Kline said the owner couldn’t sell at the time because the strip’s owners association had a covenant prohibiting a sale for a residential use. The land was zoned for an eight-story commercial building when Denver adopted its current form-based zoning plan in 2010.

In 2012, Kline pitched each of the building owners on a plan to sell the entire plot, reasoning that the property would be worth more to potential buyers as a packaged deal than as several tiny parcels.

He said a “who’s who” of developers wanted the land when it finally hit the market. Figuring out an agreement to sell amongst six separate owners and then coming up with a formula to divvy up the proceeds proved trickier than finding a buyer.

“We argued and fought and battled and, unbelievably to a certain degree, we closed the deal right before Thanksgiving,” he said. “It took me almost two years from the time of presenting the concept and two broken contracts to finally find the right guys to get it closed.”

SmithJones plans to begin construction this fall, estimating the project would take between 20 and 24 months to build. Texas-based Ziegler Cooper Architects is designing the building. SmithJones has yet to settle on a general contractor or a bank to finance the project.

Jones said the firm also has a second equity partner for the project, but declined to provide the name of the investor.

The pair is also working on a major apartment project at 360 S. Monroe St. in Cherry Creek, with plans to complete the first of nearly 300 apartment units in June. And the second phase of the Cherry Creek project, which will add another 126 apartments, is in the works.

A stretch of buildings along Grant Street are set to be demolished. Photos by Burl Rolett.

After a two-year battle, a handful of landlords in Cap Hill have sold their properties to make way for an eight-story apartment project abutting Trader Joe’s.

This is a fun website and an important business resource. Congratulations and welcome to Denver.