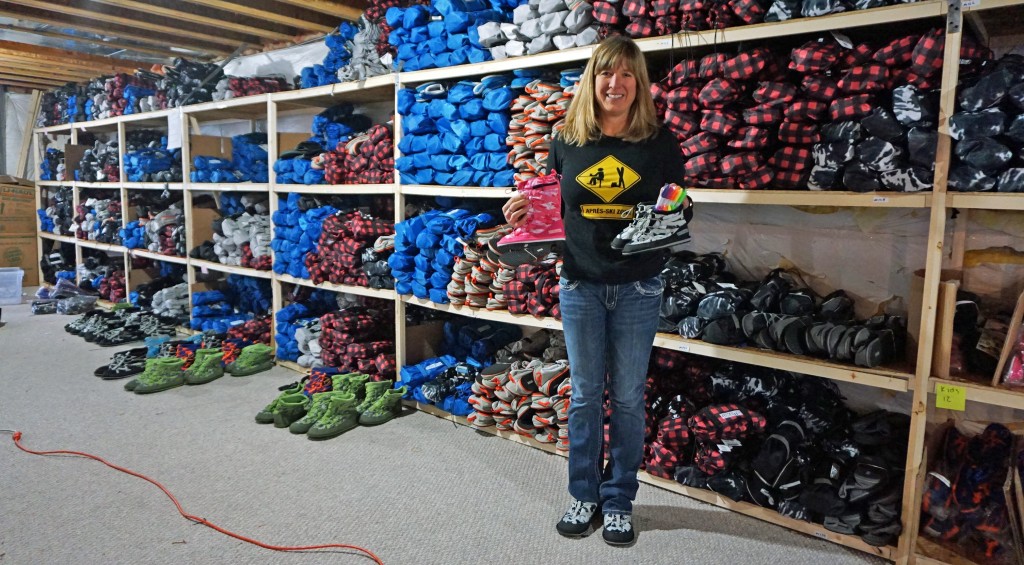 Julie Adams is giving sore feet from a day on the slopes the boot.

Her foldable, water-resistant boot startup Pakems has been getting more traction with retailers and is expanding its product line.

In December, Pakems went up for sale on Backcountry.com. And Pakems is establishing a line of children’s footwear, including boots that kids can color with fabric pens.

Adams, a former in-house lawyer for Marathon Oil who funded the startup by selling her house, said she decided to expand into children’s apparel when her young son, Bodie, complained about walking in his ski boots after a day on the slopes.

“Here I am, a single mom, skiing with Bodie,” she said. “At the end of the day, I’m carrying my skis, his skis, his poles and my poles. He sat down and said, ‘Mom I can’t walk – my feet hurt.’ I had a ski training harness on him and I picked him up and carried him through Vail Village.”

Adams quickly realized the need to expand her product to smaller skiers. But the business got its start a few years earlier.

In 2011, Adams quit her job as an employment attorney after 18 years.

“I got sick of my kid being the last one to be picked up from day-care,” she said.

Adams said she originally intended to take a sabbatical from law but ended up quitting and taking a ski trip in Cortina, Italy. 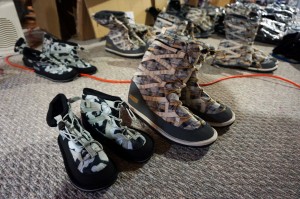 Pakems is rolling out boots for children.

One of Adams’ travel companions to Cortina was in an uncomfortable pair of ski boots. She took them off at the end of the day to enjoy an après-ski drink, but had to don the pesky boots again to return to the bar.

At that moment, Adams said she was struck with an idea – a durable boot that could be folded into a bag.

“It was kind of a cool-weather flip-flop,” she said. “The concept didn’t really exist yet.”

She mused on the concept over the summer of 2011, and flew to Portland in the fall to meet with two Nike footwear designers. They put her idea on paper, but the partnership didn’t go any farther.

In early 2012, Adams attended SIA in hopes of connecting with a manufacturer.

In May of 2012, Adams turned her attention to Mexico, where production requirements can be lower. She wanted to have a boot ready to show at the Outdoor Retailer’s show in August. She found a factory in Leon that would produce at the volume she was looking for, contracted them to make a prototype, and flew down to check on the operation.

“I got there and they handed me a piece of paper with fabric stapled to it,” she said. “I was like, are you kidding me?”

Adams left the factory without filling her order. But she found the solution on the ride home.

“I talked to our taxi driver, who knew another factory in Leon,” she said. “I went there and they made the first sample.”

With a sample boot in hand, Adams headed to the Outdoor Retailer’s expo to market Pakems.

Since then, she’s worked to sell the boot to retailers and consumers. The Pakem boots weigh less than a pound and can fold up to easily fit in a bag or pocket. The boots can now be found at retailers like Christy Sports, Moosejaw.com, online retailer Sahalie, and most recently Backcountry.com.

Pakems’ next move will be expanding its branding beyond the outdoor industry and into general fashion.

“We’re in outdoor sporting goods stores all over the country,” said Adams. “I really see us knocking on the Nordstroms of the world.”

A Lone Tree startup that makes a comfy boot for skiers to slip on after a day on the slopes is getting more traction with outdoor retailers and has launched a children’s line.