Talk about doubling down.

BusinessDen’s George Demopoulos chatted with Founder Mike Moelter about the new endeavor and why he chose the Baker section of Denver. Plus, how indoor climbing gyms are steadier than other athletic pursuits (Yes you, skiing).

Below is an edited transcript.

BusienssDen: Why did you choose the location on 5th Avenue for the gym?

Mike Moelter:  It was available, which at this point is hard to find. It was between the Highlands and Wash Park, which were our two target neighborhoods because of their active demographics. It also was under contract about nine days before we found it. We had to wait to see if the person who was going to buy it would flip it to us. And they did.

BD: Why did you decide to expand from Boulder and open a second climbing gym in Denver?

Opening the Denver location was in our original business plan when we opened in Boulder in July 2009.

BD: Was the-five year wait between opening the Boulder and Denver gyms part of a planned-out timeframe?

MM: No, it wasn’t planned, we just decided we were ready.

BD: When did your Denver facility open up?

MM: We opened over the weekend of Dec. 12, 13 and 14. Before that, we had a soft opening on Nov. 22 and 23. That included guided tours of the facility, vendors and food trucks. And we got Jagged Edge Brewery to help us throw a block party. The soft opening was to build interest.

BD: How has business been since the initial opening?

MM: It’s been busy. We sold about 1,200 memberships during our soft opening. We gauge business on number of check-ins per day. Denver has been seeing between 400 and 600 daily visitors. 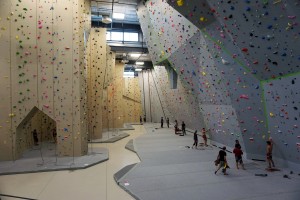 BD: Is that an increase over enrollment in 2009?

MM: There’s absolutely been more interest in climbing over the last five years. The sport has a huge advantage over other outdoor activities. There isn’t this constant huge expense. It’s also year-round, not seasonal like skiing, hiking and kayaking.

BD: What are the differences between the Boulder and Denver facilities?

BD: What did the construction process involve?

MM: To build a gym our size ranges in cost from $5 million to $10 million. I was personally involved with designing the look, feel and dimensions of the walls. After that, we hired a company called EntrePrises out of Bend, Oregon to build it.

We also installed a 170-kilowatt solar panel system on the roof that supplies our electrical needs during the day. We also have a lighting system that utilizes a lot of natural light. If everybody did their math right, we should be putting energy back into the grid.

BD: What sets Movement apart from other climbing gyms, for example Thrillseekers on Broadway?

MM: The biggest difference is that we’re not just a climbing gym. We’re a climbing and fitness facility. So in addition to climbing, we also offer cycling, yoga and traditional fitness classes like circuit training.

BD: Have those programs been popular with your client base?

MM: Climbing is our most popular feature, but after that I’d say yoga, core, cycling and circuit training.

BD: What does your clientele look like? Do you have a specific age group or skill level that you cater to?

MM: Climbers span the full age spectrum, but the majority of our members are between 20 and 40 years old. We have some climbers over 40 though.

As for skills, our members span from “I’ve never climbed before” to professionals. Will Mayo, one of Colorado’s foremost ice climbers, trains at our gym. He does a lot of winter climbing around Vail.

BD: Do you have any plans to expand further?

MM: Yes, we’re definitely going to expand. There’s nothing set in stone yet. We’ll have to expand regionally before we go out of state though.