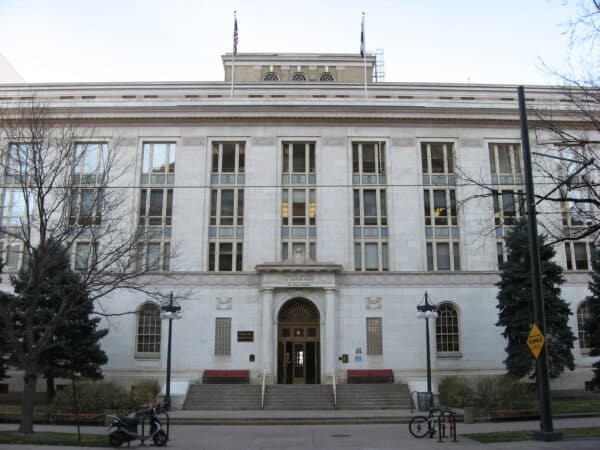 The U.S. Custom House at 721 19th St. in Denver is home to the U.S. Bankruptcy Court for Colorado. (Wikipedia)

A judge this week suspended a Denver attorney from practicing law in Colorado’s federal bankruptcy court after finding he lied, submitted false legal documents and engaged in a pattern of “fraudulent schemes” to try to get a case dismissed.

The suspension comes out of Barclay’s actions in a single bankruptcy case in which he represented clients in 2021, according to the order.

“From start to finish, Mr. Barclay’s representation of the debtors was incompetent,” McNamara wrote. “Even worse, he engaged in intentional bad-faith misconduct. … Rather than provide competent legal advice, Mr. Barclay engaged in a bizarre gamesmanship in the bankruptcy process.”

Barclay told The Denver Post Wednesday that he believes the suspension is the result of a personal vendetta against him and is in retaliation for a past investigation he said he conducted into a trustee with the Department of Justice’s U.S. Trustee Program. It oversees the administration of bankruptcy cases.

“It’s a shame I ran out of the resources to defend a lot of the allegations,” he said, adding that he had “never willingly tried to lie or mislead the court.”

Barclay declined to discuss any other specific allegations against him.

“It’s driven more by a desire to shut me up,” he said of the suspension. “… That’s really why the pleadings are as intense and wordy as they are.”

The ruling does not affect his overall law license or stop him from working in Colorado’s state courts, but Barclay must alert state authorities to his suspension by Jan. 24, McNamara ruled.

The judge’s suspension order says that in the 2021 case, Barclay forged signatures, tried to manipulate the bankruptcy fee filing system, filed motions based on false assertions of fact and suggested his clients try to infect a rival attorney with COVID-19.

Barclay also tried to get the case dismissed on false grounds and promised to pay a third-party creditor if they helped with the scheme, according to the order. The creditor did not do so, instead alerting authorities.

“Given the gravamen of Mr. Barclay’s misconduct, there can be no doubt — no doubt whatsoever — that very serious sanctions must be imposed,” McNamara wrote. “After all, the malfeasance was intentional and committed in bad faith resulting in serious abuse of the bankruptcy process. And the misconduct … was systematic and continuous, not some sort of one-time mistake.”

Barclay was first licensed to practice law in Colorado in 2018, according to state records. He registered a corporation under the trade name “Rocky Mountain Bankruptcy” in October, according to business records from the Colorado Secretary of State’s Office.

On Jan. 4, a post on a Facebook page for Rocky Mountain Bankruptcy announced that the firm would be expanding to offer bankruptcy services in Arizona.

“We are happy to announce that we are now serving the fine folks of Arizona,” the post read. “… Let us help you get a fresh start.”

This story first ran in The Denver Post, a BusinessDen news partner.

The U.S. Custom House at 721 19th St. in Denver is home to the U.S. Bankruptcy Court for Colorado. (Wikipedia)

“It’s a shame I ran out of the resources to defend a lot of the allegations,” Devon M. Barclay told a reporter.