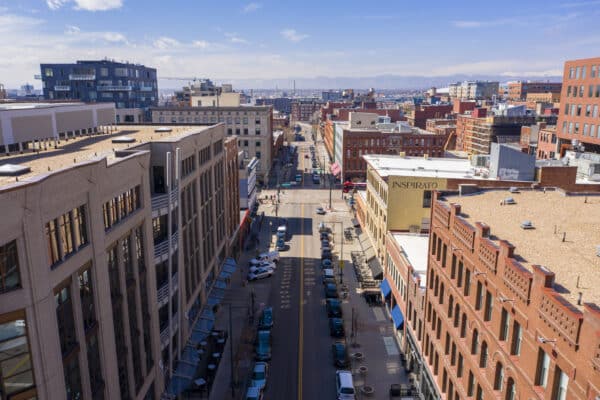 A street in Denver shot from a drone-mounted camera in March 2020. (Courtesy of Guerilla Capturing)

A class action lawsuit claims that a “price-fixing cartel” of apartment managers has been colluding in a conspiracy to keep rents artificially high across the Denver metro.

Filed Dec. 14 in a Denver federal court, it is one of several class action lawsuits to stem from revelations that RealPage, a Texas-based software company, collects non-public data from apartment managers, feeds the data into an algorithm and generates a rental price for each apartment, which the managers then adopt in almost all cases.

“RealPage and the property managers who use its revenue management services constitute a price-fixing cartel, and the revenue growth they have achieved is possible only through coordinated price setting,” the Denver lawsuit states.

The plaintiff in the case is Jeffrey Weaver, a local man who has rented apartments in the area since 2017 and believes he has paid inflated rent prices due to the alleged scheme.

The defendants in the case are RealPage and 18 management companies, including the country’s three largest: Greystar, Lincoln Property Co., and Cushman & Wakefield. Together, the 18 companies rent 44,410 apartments in the metro area, the lawsuit states.

“RealPage strongly denies the allegations and will vigorously defend against the lawsuit,” a company spokesperson said. “Beyond that, we do not comment on pending litigation.”

Spokespeople and lawyers for the 18 management companies either declined to comment or did not respond to requests for comment Friday and Monday.

Class action lawyers responded to the article by filing an array of lawsuits on behalf of renters. To date, the company has been sued in at least six states, court records show.

In his 39-page lawsuit, Weaver alleges that before RealPage, Denver apartment managers competed against each other, lowering rents at times to keep occupancy rates high.

But in recent years, as the area’s largest managers have contracted with RealPage, they have intentionally left apartments vacant, decreasing supply to increase prices, according to the lawsuit. RealPage’s algorithm also staggers lease renewal dates to ensure there isn’t a large supply of available apartments at any given time, the lawsuit claims.

“Defendants’ conspiracy … allows property managers to hike rents at a faster pace when demand is strong without needing to lower them when it is weak,” Weaver alleged. “It … causes renters to spend higher and higher portions of their incomes on housing.”

A street in Denver shot from a drone-mounted camera in March 2020. (Courtesy of Guerilla Capturing)