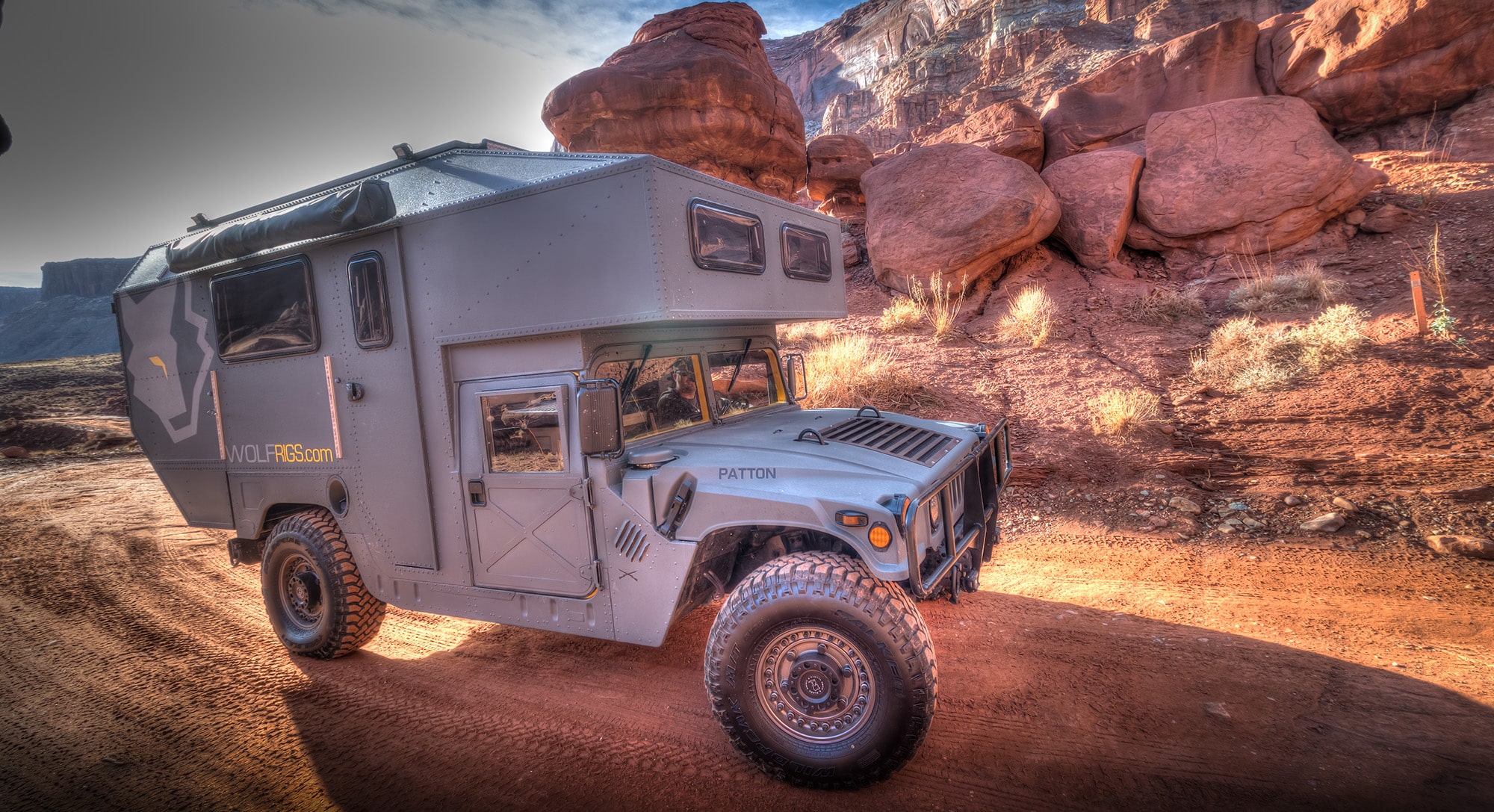 Wolf Rigs sells the Patton, built on a refurbished Humvee, for $350,000. (Photos courtesy of Wolf Rigs)

Reed Gerdes had an epiphany while four-wheeling in the outdoor Mecca of Moab: convert the Humvees he drove in the Army into off-road campers with creature comforts.

Gerdes had been working as a contractor doing home renovations and kitchen remodels. And he was familiar with Humvees from his Army days during training exercises at Fort Carson. 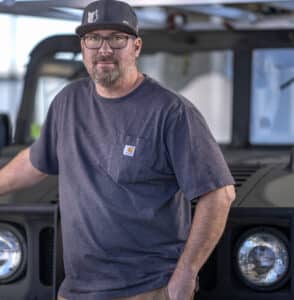 Reed Gerdes, founder of Wolf Rigs. became familiar with the Humvee in the Army.

“There’s a bunch of places that are really neat to go camping, but you can’t get there with a normal vehicle,” he said, adding that the ubiquitous campervans zipping around the Front Range cannot access the trails and campsites he most adores in Moab.

“This is the missing piece where Sprinter vans are not able to navigate to. And being 50 I don’t want to sleep on the ground anymore,” said Gerdes. He started out building his first rig for himself and his wife, recent empty nesters who wanted to spend more time camping.

“The Humvee is the best chassis for four wheeling. It’s a blast,” said Gerdes, who purchases refurbished Humvees and then welds an aluminum frame on for the camper.

The company’s prototype sits in Gerdes’ 8,000-square-foot shop in Englewood. The inside has a bathroom with a shower, an eating nook with teak cabinetry, and a queen bed above the cab of the rig.

At the top of the market sits Colorado-based EarthRoamer, which can cost $1 million for some models, with used ones above $500,000.

Gerdes, 50, said he has three orders that he needs to construct with a six-month lead time. The business has raised $1 million from investors. He said he’d like to sell eight to 12 campers in the first year and 30 in the second year.

Wolf Rigs is also building the off-road machines to be sturdier in the backcountry than competitors. The camper is welded and bolted from thick sheets of aluminum. “Driving off-road is like being in an earthquake every minute,” he said of all the rattling.

“I looked at the RV markets, and the quality of most RVs is garbage. They’re horribly built.” 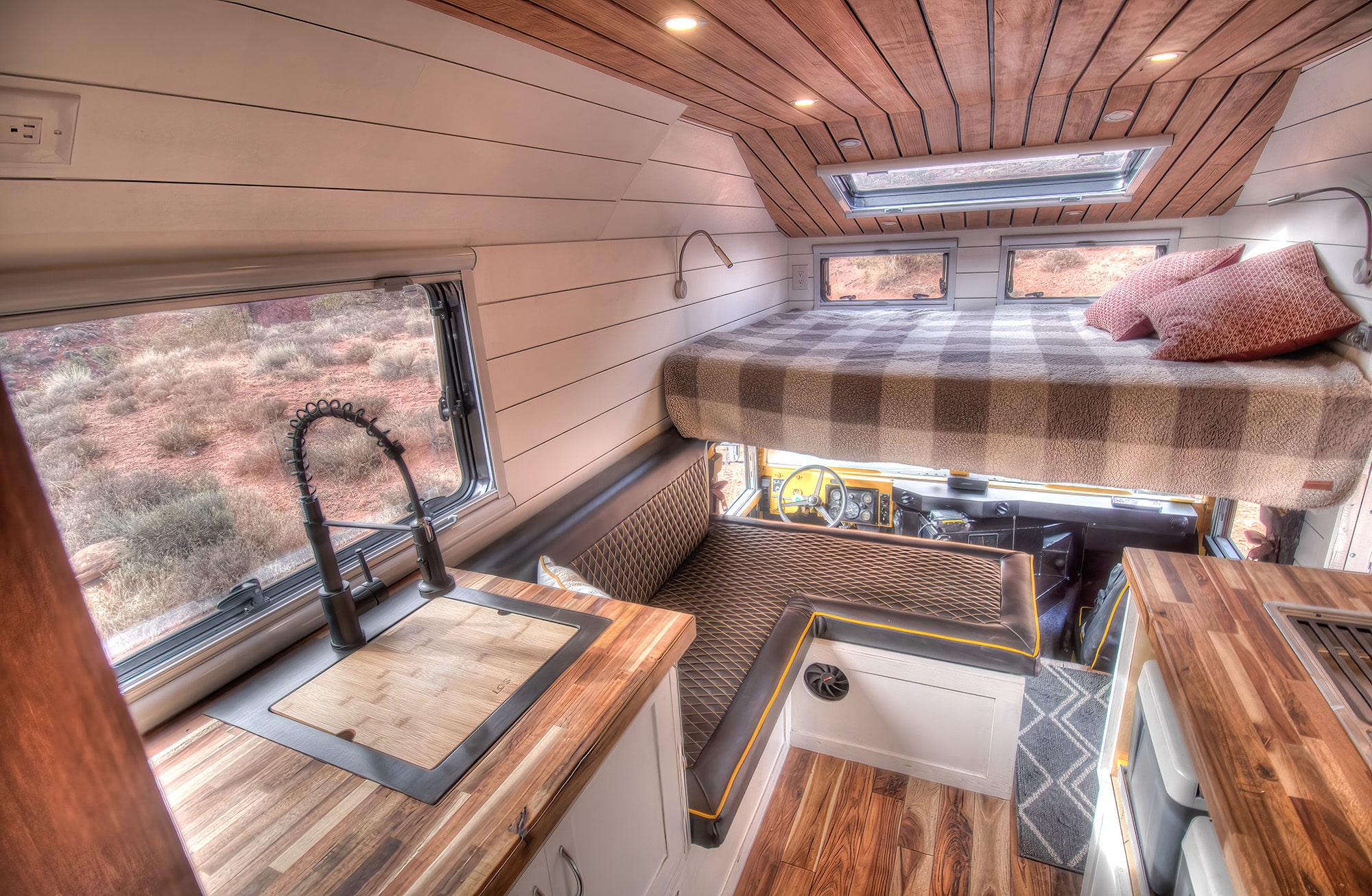 The interior of the Patton has teak woodwork and a bathorom with a shower.

Gerdes added, “I accidentally backed into a parking pole. It put a little ding and that was it. If I did that with an RV, it would tear a hole into that thing. You can crash through trees and rocks, no problem.”

The off-road capabilities are part of the draw.

“It’s a high mobility vehicle. It’s designed to go over multiple terrains,” Gerdes said. “There’s a reason back in early ’90s, Arnold (Schwarzenegger) wanted to bring it to market.”

The Wolf Rig weighs 9,000 pounds and gets around 17 miles a gallon, Gerdes said.

The Golden native, who attended Colorado State University, named the rig the Patton. He and his dad watched the movie about the World War II general all through his childhood and it was a natural connection to the military roots of the rig.

Wolf Rigs enters a dynamic Colorado camper industry. Other companies based here include the aforementioned EarthRoamer. Local truck camper manufacturers include Hallmark, Phoenix and Outfitter campers. Colorado Teardrop, meanwhile, is based in Boulder.