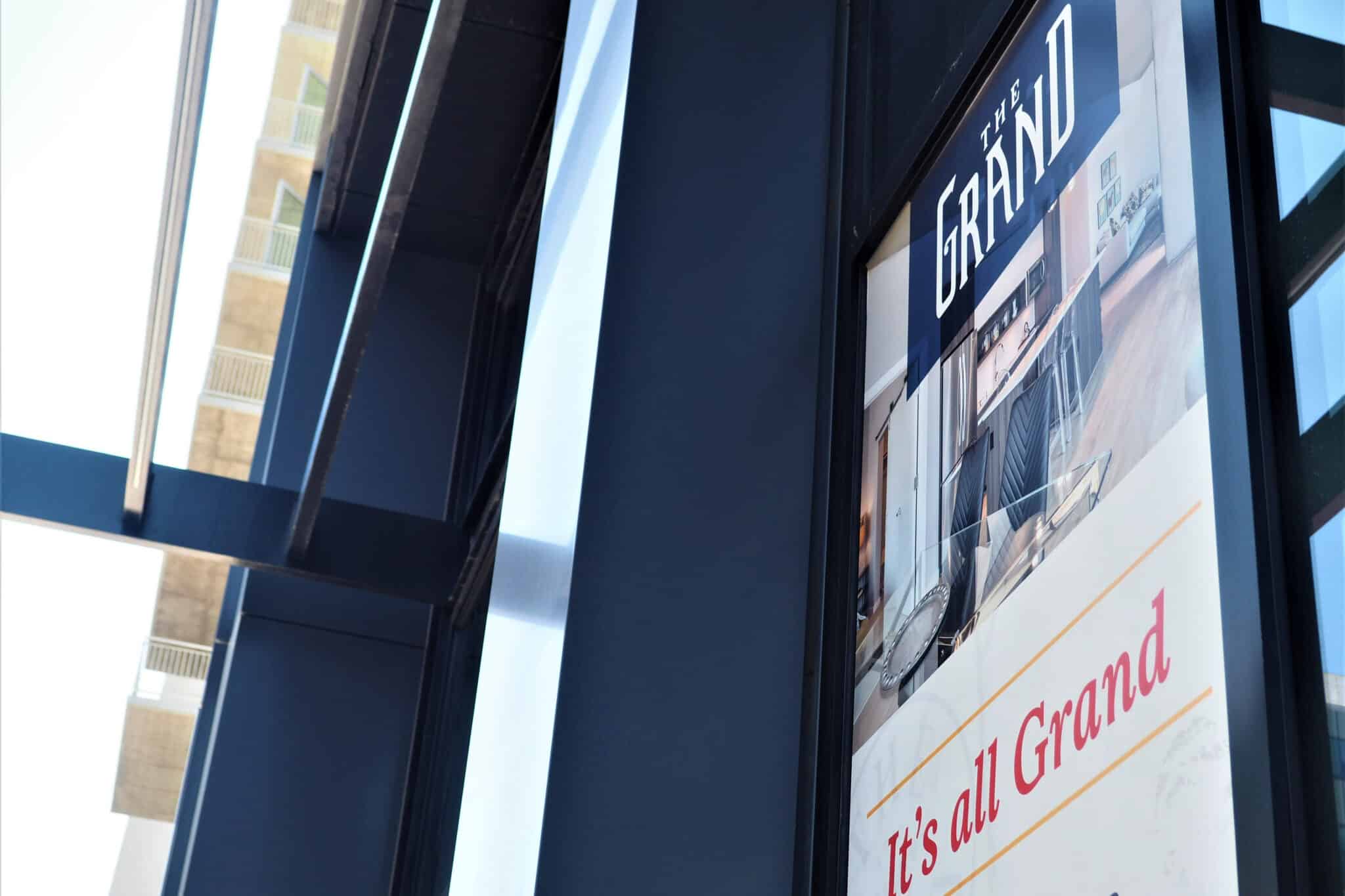 Signage on an exterior window at The Grand Apartments in LoDo proclaims that “It’s all Grand” but former tenants would disagree. (BusinessDen file photos)

Eleven former residents of the closed and damaged Grand Apartments near Union Station have sued the building’s owner and manager, alleging they were wrongly evicted.

The Grand required tenants to leave in August so that it could repair a long list of issues at the 24-story, 508-unit complex at 1777 Chestnut Place. Despite being only four years old, it has experienced flooding, power outages, mold, defective elevators and unsafe balconies.

The former tenants filed their lawsuit Tuesday morning in Denver District Court. Three hours later, Judge David Goldberg threw the suit out because, he said, it used “rhetorical devices” and “trite and inflammatory language.” The lawsuit had compared The Grand’s swimming pool to a swamp in “Jurassic Park” and its flooding to Niagara Falls.

An edited, toned-down version was filed Tuesday night. But that version was still sarcastic at times, which is unusual for a lawsuit in Denver District Court.

“What is better than living in an outrageously expensive building that seems almost possessed to hate its occupants? Being defrauded into signing a lease,” it states. “Then, because why not, being lied to during your tenancy. Into this milieu, add the indignity of being shuttled from one unit to another because moving during a COVID-19 pandemic is convenient.”

“Where does one find such thorough mistreatment, at an eye-watering price? The Grand Apartments in Denver, Colorado. Hundreds of tenants. Paying millions of dollars. And having nearly every type of legal right…known under Colorado law violated along the way.” 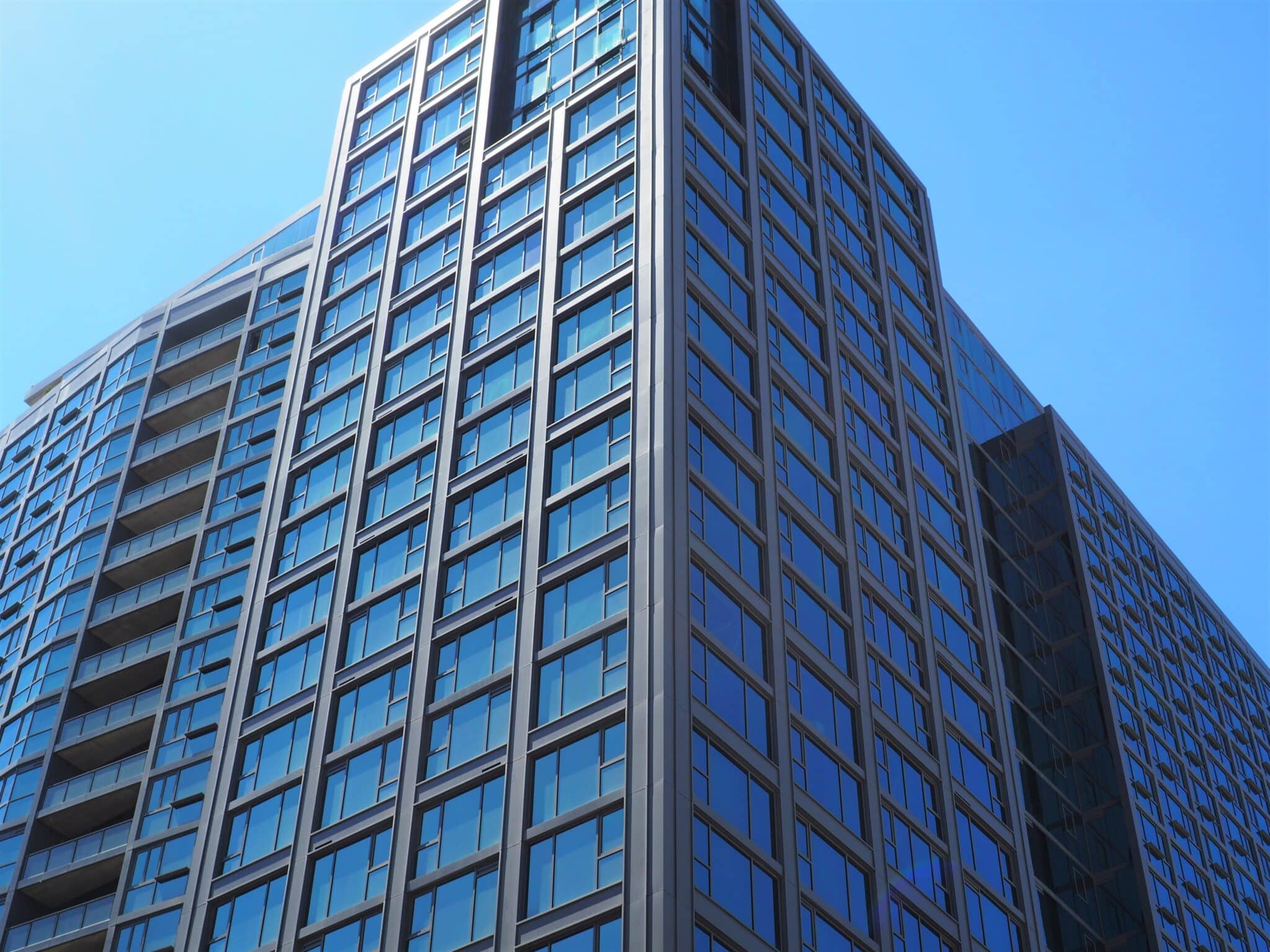 The Grand Apartments at 1777 Chestnut Place.

Shorenstein Properties, the California company that owns the Grand, declined to comment. Greystar, the South Carolina company that manages it, did not respond to a request for comment.

The lawsuit describes, in novelistic language, “near-poltergeist levels of flooding,”  a swimming pool “unfit for human use” and “with the distinct look of raw sewage,” and outside The Grand, “a Western Front of drug dealers, wandering addicts and omnipresent random screamers.”

The 11 tenants, according to their lawsuit, were told they would be reimbursed and given money for hotel stays when their units were unlivable, but this didn’t happen. Instead, the tenants were evicted in August with only 30 days of notice, their lawsuit claims.

They seek an undetermined amount of money for damages and attorney fees. The tenants are represented by Denver attorney Ian Hicks.

There are now several ongoing cases involving The Grand. On Aug. 5, Shorenstein sued Saunders Construction in Englewood, blaming the general contractor for defects there. Saunders countersued in October, accusing Shorenstein of not paying it enough.

There is also a pending federal case. Katherine McCormack, an attorney and former resident of The Grand, claimed in a lawsuit Aug. 25 that Shorenstein and Greystar knew structural defects would cause it to evict tenants but continued signing long-term leases anyway.

Signage on an exterior window at The Grand Apartments in LoDo proclaims that “It’s all Grand” but former tenants would disagree. (BusinessDen file photos)