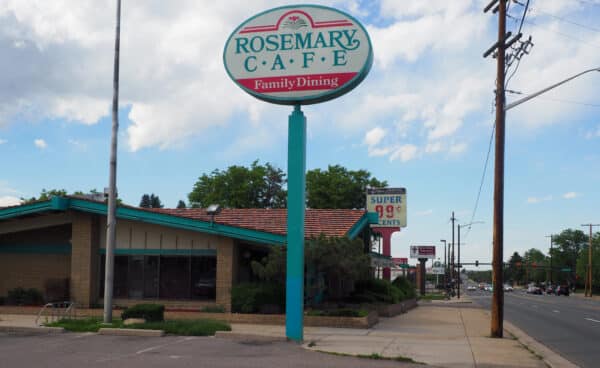 Rosemary Cafe at 2133 S. Sheridan Blvd. closed in May after 30 years in business. (Matthew Geiger
photos)

An experienced restaurateur is taking over the former Rosemary Cafe.

The diner, which closed in May after decades at 2133 S. Sheridan Blvd. in Denver, has been leased to Jelly Cafe owner Josh Epps.

But don’t expect a third Jelly location from Epps, who opened the inaugural one at 600 E. 13th Ave. in Cap Hill in 2010 and added a second near the University of Denver in 2012.

He’s planning to turn Rosemary into the Harvey Park Grille, aiming to fill what he sees as “a big hole” in the neighborhood dining scene.

Epps said he wasn’t really looking to do another restaurant, but that he’s lived two blocks away in the Harvey Park neighborhood for more than half a decade. He was waiting to see what would happen to the former diner, he said, when his girlfriend asked how he’d feel if someone else leased it and did something unspectacular.

“And I said, I will never forgive myself,” Epps said.

“We just think it’s an area that needs a little love,” Preblud said.

Epps said he expects to spend roughly $750,000 renovating the diner. He’s planning to have a full bar, with draft beers and cocktails, but said it was too early to discuss menu specifics, although he’s aiming to price entrees under $15.

Epps said the area has a lack of non-cafeteria food offerings, although he did compliment the nearby Jaimes Mexican Restaurant. He said Jelly patrons will “recognize the care that’s going into the food” at Harvey Park Grille, but that he’s really trying to be a “neighborhood spot.”

“It’s one of the last untouched parts of Denver, where you’re not seeing the scrapes to build an ultramodern home,” he said of Harvey Park.

“We don’t want to alienate half our cliente with pretentious, elevated food,” Epps added.

Epps also previously owned the now-closed Tennyson Street burger spot The Royal. He opened it in 2014 and sold it three years later.

Rosemary Cafe at 2133 S. Sheridan Blvd. closed in May after 30 years in business. (Matthew Geiger
photos)