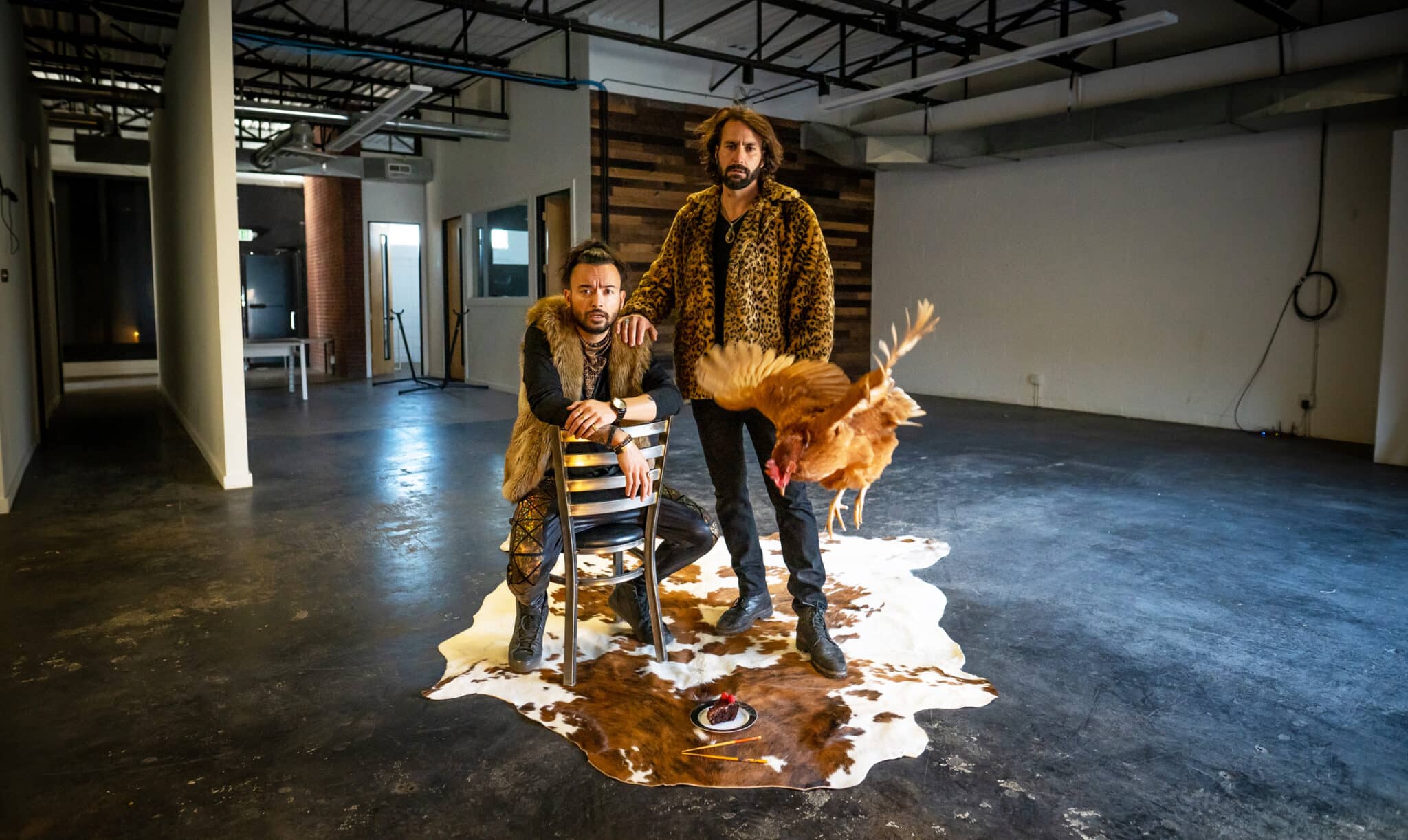 Beacon owners Robert Champion and Mario Nocifera with Wednesday the chicken, which inspired the NFT program at the RiNo dance club. (Images courtesy of Beacon)

Mario Nocifera wants to put the VIP into NFTs.

With the rising popularity of NFTs, or digital assets that cannot be replicated and represent real-world objects like art, music, in-game items and videos, many people have questioned why a picture of apes sold for tens of millions of dollars coupled with headlines about million-dollar hacks of NFT projects.

But Nocifera, the owner of local dance club Beacon at 2854 Larimer St. in RiNo, told BusinessDen that his new NFT program has some real-world value.

“I’m into crypto and a big believer in the technology. I wanted to allow others to get into it without the need to invest in crypto or buy Bitcoin and without that ‘Oh my God’ factor, since people get overwhelmed if they’re not used to working with crypto,” Nocifera said.

In June, Nocifera launched a VIP membership program for Beacon using NFTs. He’s selling 50 NFTs, which are various pictures of a chicken with a disco ball, for $500 each. Nocifera started promoting the VIP NFT program by word-of-mouth in June. He said he has sold 16 out of 50 so far.

“We want to keep that number low to keep the integrity of the value,” Nocifera said. “Everyone that owns one comes all the time because that’s why they bought it. One guy that lives in Florida, who spends a quarter of his time here and is big into crypto, even bought one.”

Beacon NFT holders get a couple of perks.

When you come on a Friday night, you get to skip the line with a friend. Is your favorite famous DJ playing at the club? No need to pay the cover charge, which typically ranges from $5 to $100.

“We don’t want people to be afraid of our NFT because at the end of the (day), the chicken isn’t worth the money, it’s what it represents,” Nocifera said. “That’s why our platform is a tangible asset.”

Beacon, which Nocifera opened with his business partner Robert Champion in December, is a dance club and bar decorated with immersive art installations. The idea for an NFT was presented to the owner by one of the club’s local artists and performers, Brandon Theis.

Nocifera, 47, began buying crypto in 2019, but he didn’t own any NFTs, so Theis guided him through the process. 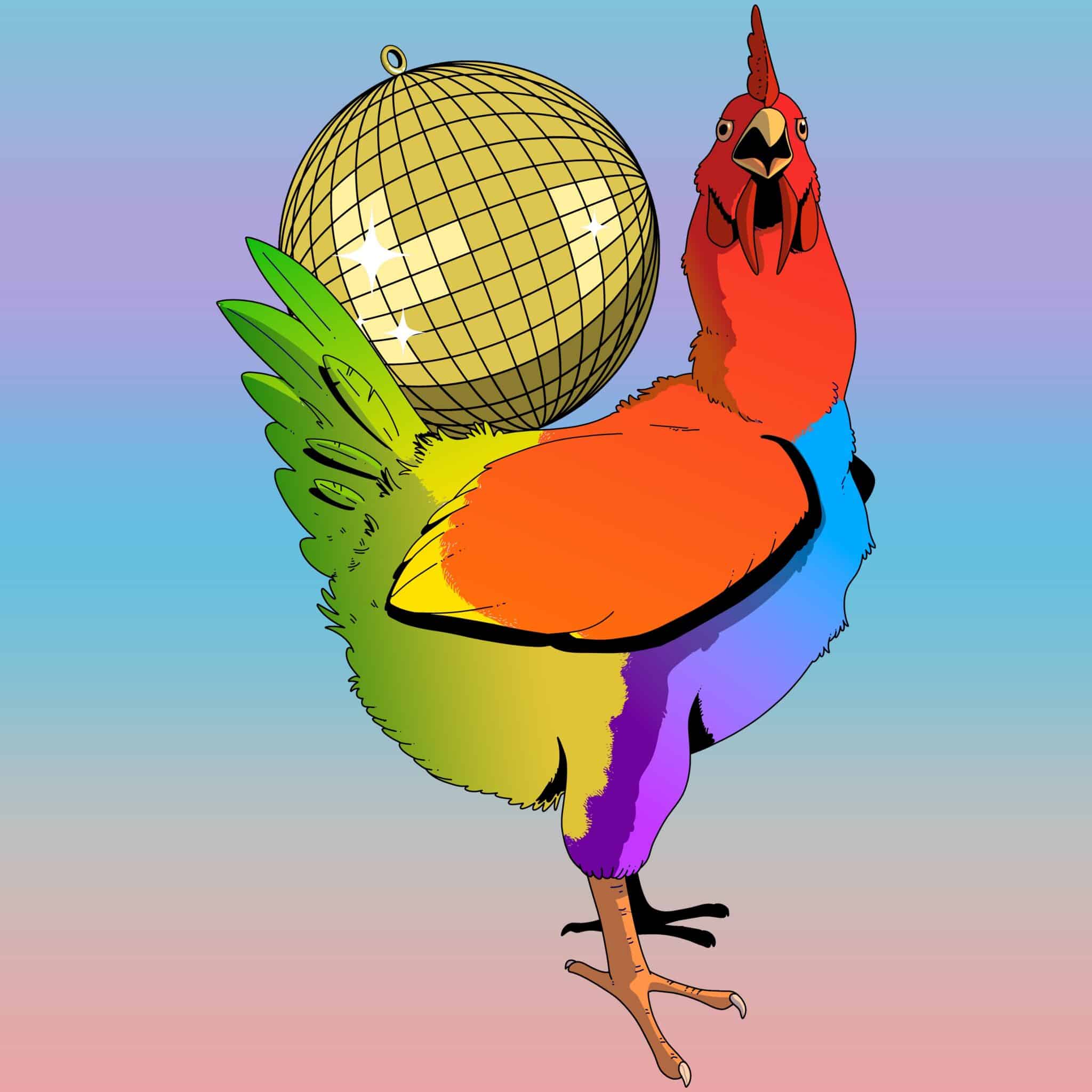 Beacon’s NFT for VIP members is an image of one of Nocifera’s chickens with a disco ball.

“We consider ourselves a hub for artists to network within their communities and draw inspiration from all mediums, which now includes digital art,” Nocifera said.

Before Nocifera opened Beacon, he built his own chicken coop and bought seven chickens, naming them each after a day of the week. He did a promotional photoshoot for Beacon with Wednesday the chicken with a disco ball, which later became the inspiration for the NFT.

Austin Foster, a local resident who works in the cannabis industry, frequents Beacon often and purchased a VIP NFT in June to get access to Nocifera.

“I was essentially buying into Mario because I feel like we can create a lot of good things together, and now he’s interested after spending $500 on an NFT,” Foster said. “I wanted to get involved in the dance club scene, and this was a good steppingstone because once you’re a part of the community, Mario introduces you to everyone.”

Foster, 29, said he’s used his NFT around seven times since purchasing it, and convinced a friend to buy one, too. His favorite perk is being able to skip the line, which is usually around 20 minutes long.

But he’s also suggested some additional perks to Nocifera, including member-only events, free drink tickets and a discounted VIP section.

“Not just anybody is going to spend $500 to skip the line,” Foster said. “People in that network could be substantial to each other for business endeavors. If you sell them with more incentives, they’ll sell out super quick because right now people are fine waiting for 20 minutes.”

To get free entry, Beacon NFT holders must unlock their phone and show the bouncer the image of the chicken in their mobile wallet. A screenshot doesn’t work. But like other NFTs, owners can sell them and the club perks would transfer to the buyer.

“It’s been so cool to see this little ecosystem of NFT holders has come together at Beacon,” Nocifera said. “Of the handful that I’ve sold, I’ve been really able to get to know the buyers and even introduce them to each other.”

For those still skeptical, Nocifera said he’s getting ready to create a VIP section within Beacon’s dance floor that will host a more traditional bottle-service and reservation model.

“We don’t want to scare away any paying customers that still want the VIP experience but might not be ready to explore the world of NFTs yet,” Nocifera said.

Beacon owners Robert Champion and Mario Nocifera with Wednesday the chicken, which inspired the NFT program at the RiNo dance club. (Images courtesy of Beacon)