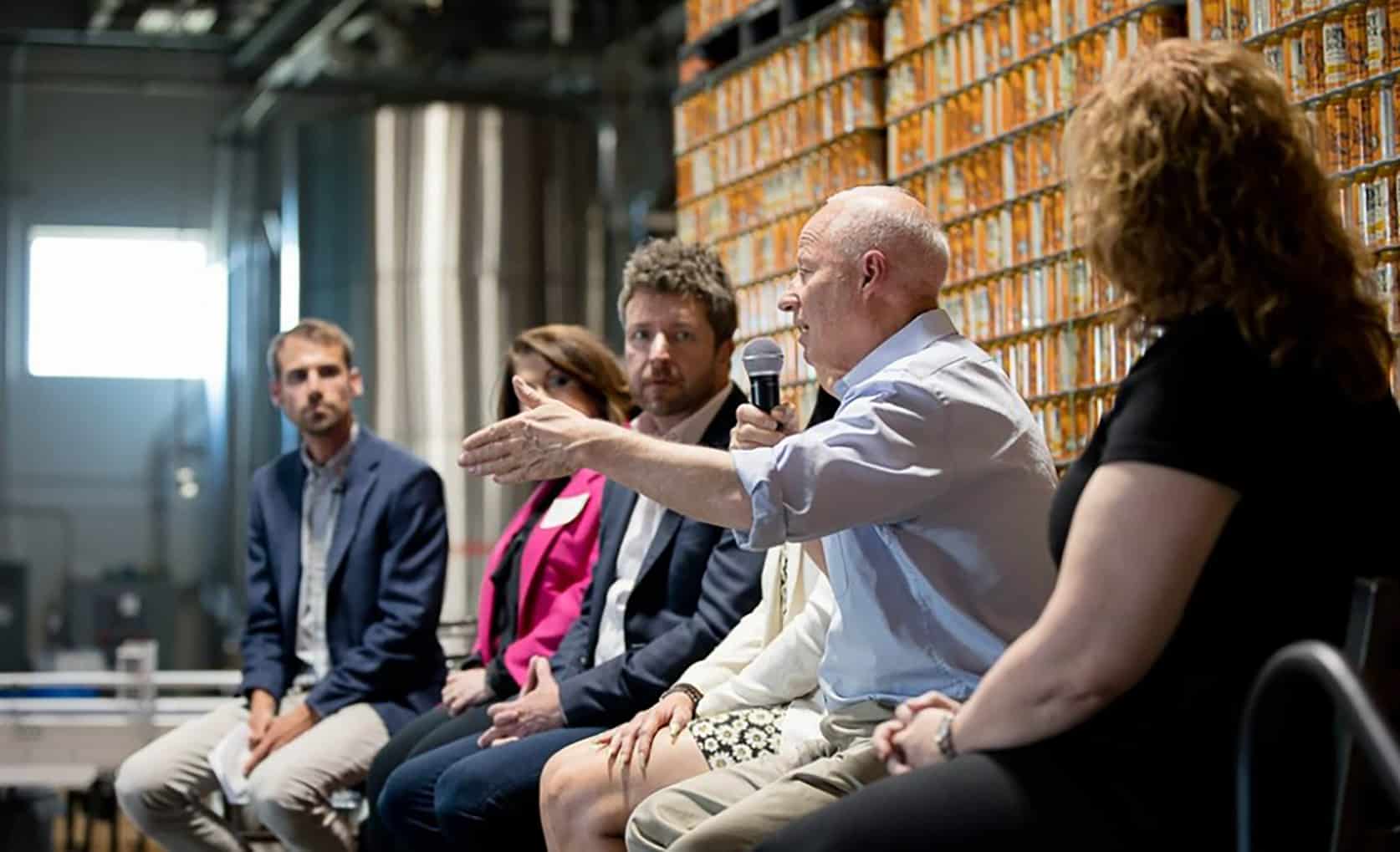 Aurora Mayor Mike Coffman, center, speaks during BusinessDen’s “Future of Aurora” event at the Dry Dock Brewing Co. on June 22. Coffman has proposed a crackdown on water use that could make the golf course to be built at Prairie Point the city’s last. (BusinessDen file photo)

After 10 months of deliberations, the increasingly water-frugal city of Aurora has reached a tentative settlement with a Denver developer over irrigation at what Mayor Mike Coffman hopes will be the city’s last new golf course.

The agreement, which still needs to be approved by the Aurora City Council, includes a grandfather clause that will safeguard Prairie Point from Coffman’s proposed crackdown on water use, according to Jody Harper Alderman, an attorney for Oakwood Homes.

“Oakwood certainly feels like it was a successful settlement,” Alderman said.

“There was some reduction in the annual amount of water to be released from Aurora to Oakwood for golf course irrigation but, from Oakwood’s perspective, it’s a sufficient amount,” Alderman said. “It’s more than adequate to irrigate the golf course because they will have conservation measures in place. So, it was a compromise that seemed to achieve all of the goals Oakwood needed.”

Pat Hamill, CEO of Oakwood Homes, said the compromise clears the way for a groundbreaking this fall on the roughly 900-acre, 1,700-home Prairie Point community at E-470 and Parker Road. Work on the 18-hole golf course could begin next spring.

“Our aim is always to design and build one of the most conservation-friendly courses ever,” Hamill said by phone Friday.

Work is expected to begin this fall on the 900-acre, 1,700-home Prairie Point community at E-470 and Parker Road in Aurora. (Rendering courtesy of Oakwood Homes)

The tentative settlement was hashed out at a mediation hearing Aug. 1. One week later, Oakwood Homes sued Aurora. That litigation is a backup plan, giving Oakwood another avenue for getting water if its settlement is rejected by the Aurora City Council.

The lawsuit claims that agreements dating back to 2002 and 2005 granted the groundwater beneath Prairie Point to its landowners. Yet, last October, the city of Aurora told Oakwood that it would not renew water rights for the golf course after 2035, according to the lawsuit.

That set off nearly a year of deliberations that culminated in the Aug. 1 agreement, according to Alderman’s lawsuit. At one point, Aurora suggested Oakwood could build an 11-mile pipeline at a cost of at least $26 million if it wanted water after 2035, the lawsuit claimed.

The tentatively settled dispute comes at a time when Aurora is reevaluating its water use. Coffman, a Republican, has proposed an ordinance that would make Oakwood the city’s last golf course development by banning future courses, among other restrictions.

Aurora Mayor Mike Coffman, center, speaks during BusinessDen’s “Future of Aurora” event at the Dry Dock Brewing Co. on June 22. Coffman has proposed a crackdown on water use that could make the golf course to be built at Prairie Point the city’s last. (BusinessDen file photo)

If finalized, it will allow Oakwood Homes to break ground on the 1,700-home Prairie Point protected from the mayor's proposed crackdown on water use.