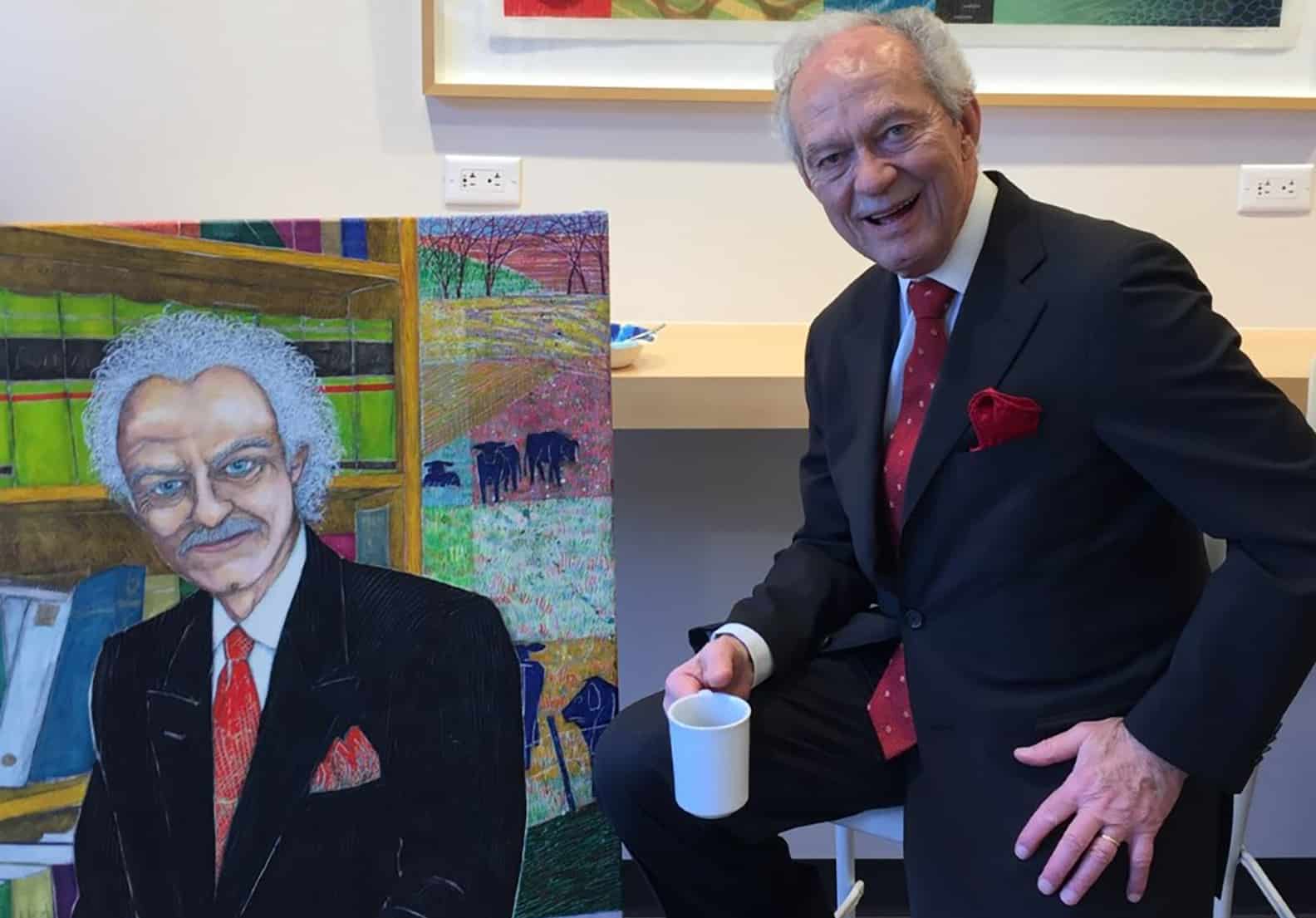 John Moye poses for a photo next to a painting of himself. Moye died May 27 at the age of 77. (Photos courtesy of Moye White)

When John Moye’s father died in Deadwood, S.D., he left behind this concise, 11-word obituary he had written for himself: “Jeff Moye left Deadwood yesterday and is not expected to return.”

When John Moye died May 27 at the age of 77 — after an acclaimed legal career that included a University of Denver professorship, creation of an institute to improve the justice system and 40 years atop the law firm that bears his name — his obituary was a far less pithy 699 words. 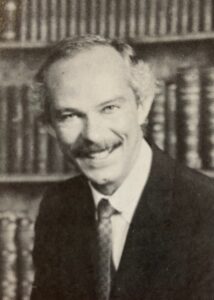 “He would want to be remembered as a friend to everybody,” his daughter, Kelly Moye, said in an interview. “It didn’t matter whether you were the owner of a company or the janitor. He wanted to know you and he cared about you and your kids and where you came from.”

As a wiry and energetic young man, Moye studied accounting and business at Notre Dame in the early 1960s, where he was a rock ‘n’ roll disc jockey known as Johnny Mopp. Bored in his first accounting job after college, he moved on to Cornell University, where a business law professor told him that he was helpless. Moye would simply “never understand contracts.”

To spite the professor, he spent a 50-year law career specializing in contracts.

“People really respected him and really paid attention to what he had to say, more so than a lot of other lawyers. A lot of lawyers have their opinions,” his longtime law partner, Ted White, said with a laugh this week, “but they’re not all worth listening to and his are. Or, his were.”

After law school, an ROTC commitment led to a four-year stint at Lowry Air Force Base, bringing Moye to Denver, the city he would call home for the rest of his life.

While a thirtysomething DU professor in the 1970s, he used songs to teach otherwise dry and complex tenets of contract law, as he explained to an interviewer in 2014: “‘Tell Laura I Love Her’ is an offer to make a unilateral contract, for example, but ‘Help Me, Rhonda’ is an inadequate offer because it doesn’t state the context of what you want Rhonda to help you do.”

That culminated in his “Contracts Rap,” which was featured in a New York Times article. To help students memorize contract rules while taking Colorado’s bar exam, Moye worked 60 concepts of contract law into rhyming couplets that served as a mnemonic for thousands of students.

Should you delegate a duty, but the delegate abstains

To the delegator the obligee complains

The obligee becomes a beneficiary

Legend has it that law students waved lighters in the air after one of his lessons.

“I can’t say it in rap or rhyme, and I can’t spin it on a vinyl; but, simply put, John’s heart was as big as his brain,” former Colorado Supreme Court Justice Rebecca Love Kourlis wrote May 31. 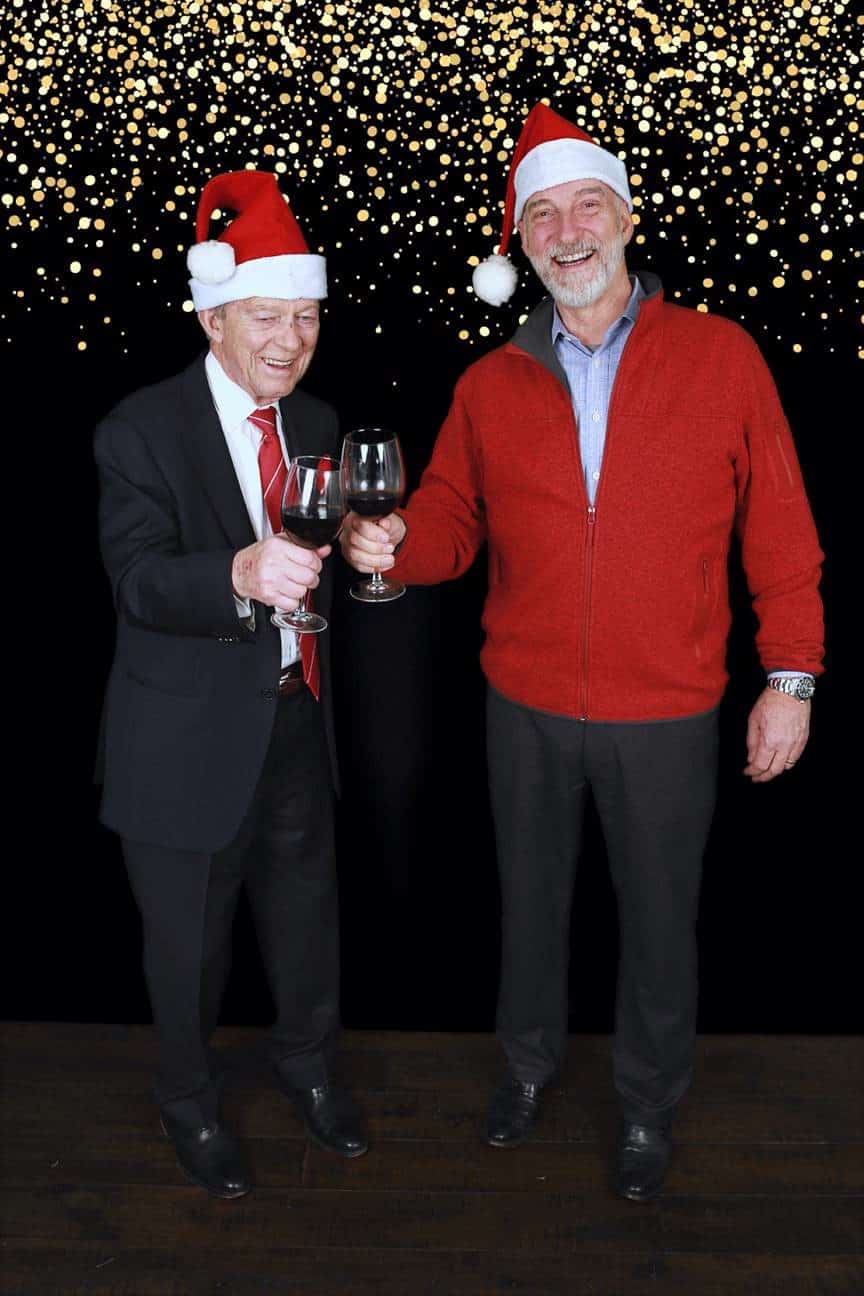 In the summer of 1976, Moye created the law firm that, after a few renamings, is now Moye White, the 13th-largest firm in the city, according to Denver Business Journal rankings.

“Every day he would go around the office; at some point or another, he’d decide to do a round and he would chat with everybody,” White recalled. “There were little things that he’d remember about everybody in the office — staff, people in the coffee center, lawyers, everybody. He’d ask them, ‘Oh, how’s your father doing now?’ or ‘Did you end up getting that puppy?’”

“Even a few days before he died, he was still making the rounds around the office in his wheelchair, saying hello to people,” White said. “He really cared about this firm.”

Moye would sometimes play classical music on the firm’s grand piano as the workday wound down. But there was one office behavior that Moye, an impeccable dresser with an affinity for Italian suits, could not get behind, according to White: “He wasn’t too keen on casual Fridays.”

Moye and White, who knew each other for 40 years and practiced law together for 25, were also neighbors. They lived across from each other in the Humboldt Street Historic District west of Cheesman Park and started a neighborhood association there. Moye was passionate about historic preservation and received a Colorado Preservation Inc. award for his work in 2017.

At home, Moye was an elaborate prankster, his daughter Kelly recalls. When the boyfriends of his three daughters came over for dinner, Moye would play pranks to see how they would react. Once, he placed an entire Italian meal directly on the dining room table, no plates. Another time, he handed out invoices to all guests after dinner, pretending to bill them for what they ate.

“He would pull these pranks because he liked to be funny and he was funny but he also did it to protect us,” said Kelly, who described her father as a “staunch feminist” who told his daughters they could be anything they wanted to be. “It was like, ‘We’re going to test these boyfriends in a big way.’ It was hilarious. We have some great, great stories about that stuff.”

She added, “When he was home, it was just like magic. Being around dad was like magic. You just couldn’t get enough of him. He was so charismatic and super loving.” 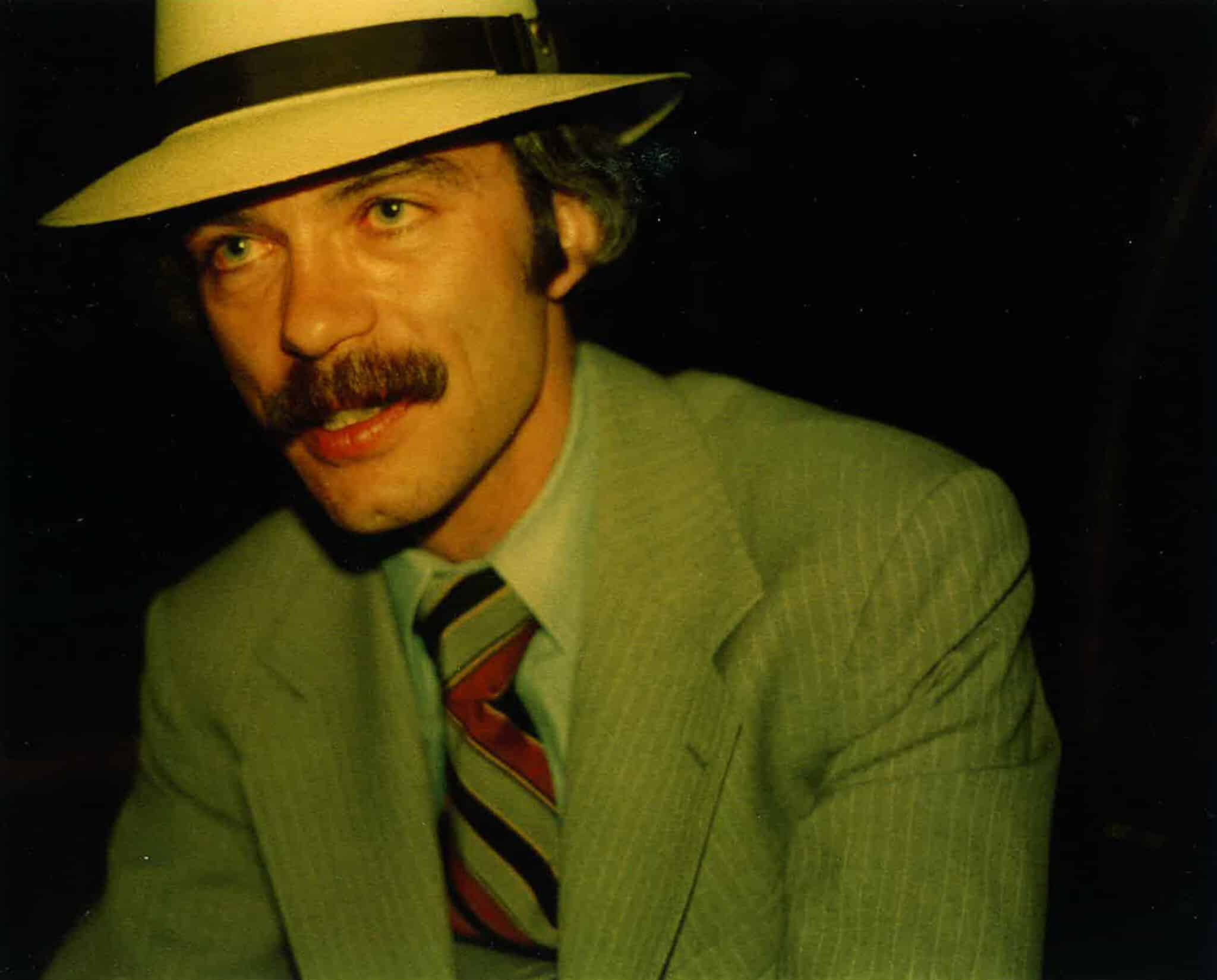 John Moye was known as an impeccable dresser with an affinity for custom-made Italian suits.

Moye also played the piano at home, everything from Tchaikovsky to Billy Joel. “The Phantom of the Opera” soundtrack was the last thing he played before his death. But he couldn’t read music, so he played everything by ear, Kelly said.

“I took him to ‘Jersey Boys’ a month ago, when they came in town. We saw the show and when we came home, he sat right down and started playing all the songs from ‘Jersey Boys.’ He just played everything that he heard,” she recalled.

In the mid-2000s, Moye co-created the Institute for the Advancement of the American Legal System at DU. The institute, located in John Moye Hall, is a think tank that aims to make the legal system simpler and fairer. Kourlis, the former justice who was another co-founder, said last month that IAALS “grew out of a cocktail napkin conversation” she had with Moye.

Moye is survived by three daughters, a stepdaughter, five grandchildren and a dog named Joe Biden, “who was named long before the presidency,” according to his obituary. A celebration of his life will be held at DU’s Newman Center from 4 p.m. to 6 p.m. July 6.

True to form, his obituary ended with a passage of rhyming in a personalized version of the final verse from his favorite poem: the 19th century baseball ballad “Casey At The Bat.”

Oh, somewhere in this favored land, the sun is shining bright

The band is playing somewhere, and somewhere hearts are light

And is not expected to return

John Moye poses for a photo next to a painting of himself. Moye died May 27 at the age of 77. (Photos courtesy of Moye White)