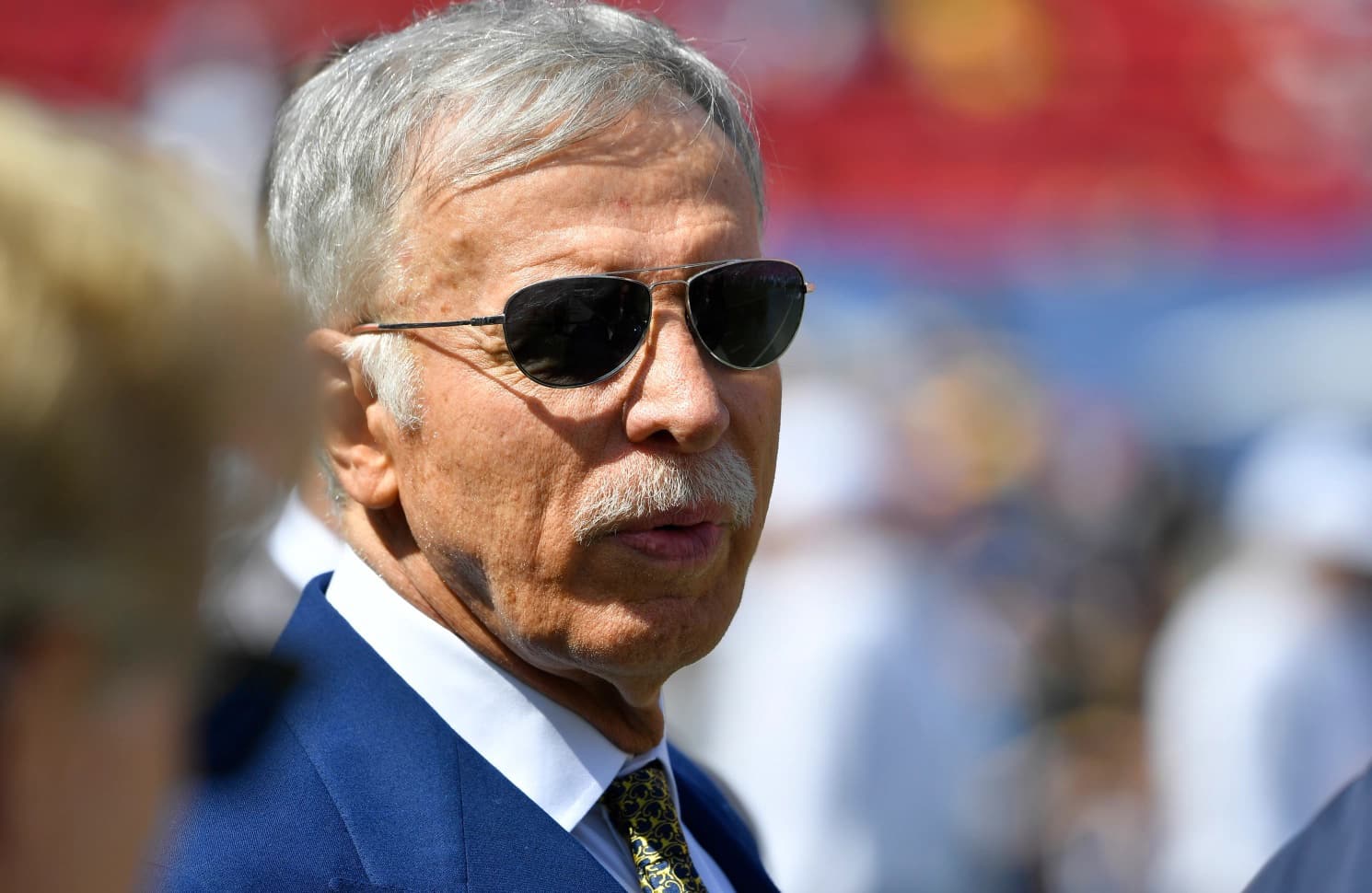 The billionaire owner of the Denver Nuggets and Colorado Avalanche is already behind The River Mile, a neighborhood being planned for the current site of the Elitch Gardens amusement park.

And now, with city leaders having signed off on an overall vision for that site, Kroenke is shifting his attention to an adjacent one: the sprawling parking lots that surround Ball Arena, where both the Nuggets and Avalanche play.

In late March, Kroenke Sports & Entertainment submitted a “large development review” document to the city of Denver, outlining plans to repurpose a 55-acre site anchored by the arena formerly known as Pepsi Center.

The plans don’t detail any planned changes to the arena building itself, which opened in 1999.

Unlike Empower Field at Mile High and Coors Field, which are owned by quasi-governmental stadium districts, Ball Arena and its parking lots are owned by Kroenke’s company.

“It’s rare to find 55 acres under visionary ownership in a city with such potential,” the plans state. 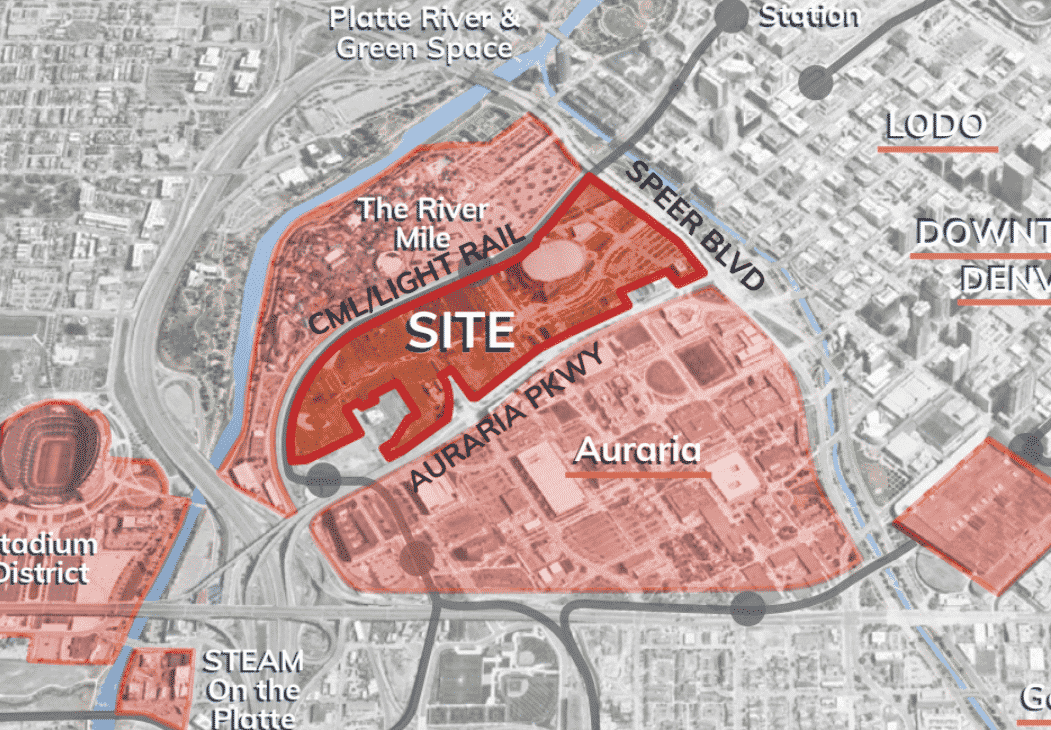 A map showing the boundaries of the area referenced in the plans. (Denver city documents)

In the 41-page document sent to the city, Kroenke says the project could ultimately involve the construction of millions of square feet of building space across a variety of uses, including housing, office and retail.

An introduction to the document mentions four million to five million square feet overall, although an image later on references seven to nine million. The plan indicates those figures could be even higher, however, if the city opts to alter a protected view plane that currently limits building height on a portion of the site.

Beyond that, the plans don’t detail specific buildings, although basic renderings show structures exceeding the height of the arena.

Not every inch would go vertical. The plans say a significant portion of the site — 12 percent in one part of the document, 20 percent and about 10 acres in other mentions — would become park or open space.

The project would require the site to be rezoned, which would have to be approved by the Denver City Council. A rezoning application could be submitted this coming August, and potentially voted on in January, according to a project timeline included in the plans. 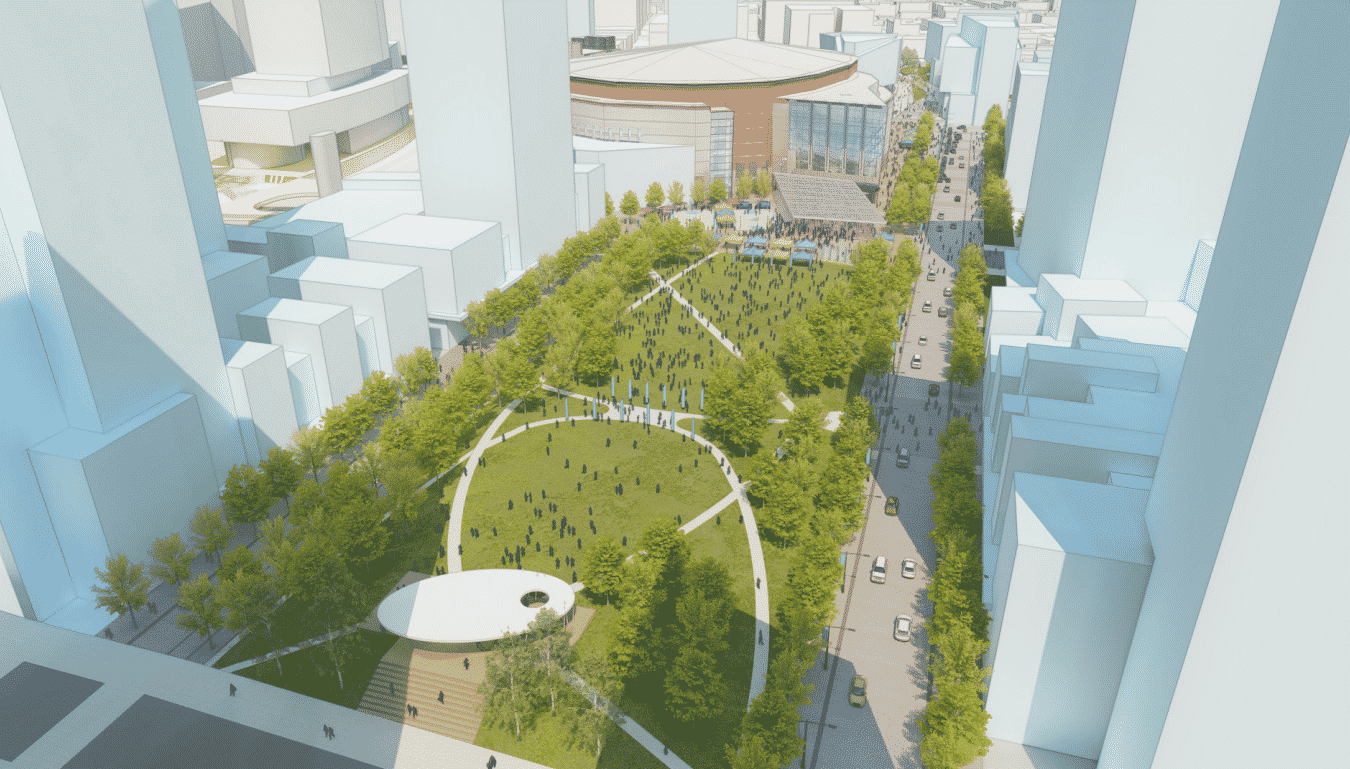 A rendering shows a park on the west side of Ball Arena.

The project would drastically change the feel of the area, which generally sits quiet when the arena is not hosting a game, concert or other event. In the document, Kroenke says the site currently feels like an “island,” separated from adjacent properties by railroad tracks and Speer Boulevard and Auraria Parkway, both of which have multiple lanes in each direction.

“Surrounded by a rich urban and environmental fabric, the site stands isolated from the adjoining context due to its large swaths of surface parking lots and constrained access points,” the document states.

On the other side of the tracks is Elitch Gardens, a 62-acre site that Kroenke purchased in 2015 in partnership with Denver-based Revesco Properties. The City Council rezoned that site in 2018 to allow for the eventual construction of a host of new buildings. No physical work has begun at the site, however, and no firm date has been given for moving the park; Elitch Gardens opened for the season this past weekend.

“Together with The River Mile, the two properties may expand the size of downtown Denver by up to 40 percent,” the Ball Arena document states.

Revesco head Rhys Duggan told BusinessDen last week that his firm is not involved in the Ball Arena redevelopment effort.

Kroenke’s interest in the project isn’t surprising. Redeveloping stadium parking lots, or incorporating adjacent entertainment districts into new stadium projects, is something of a national trend. 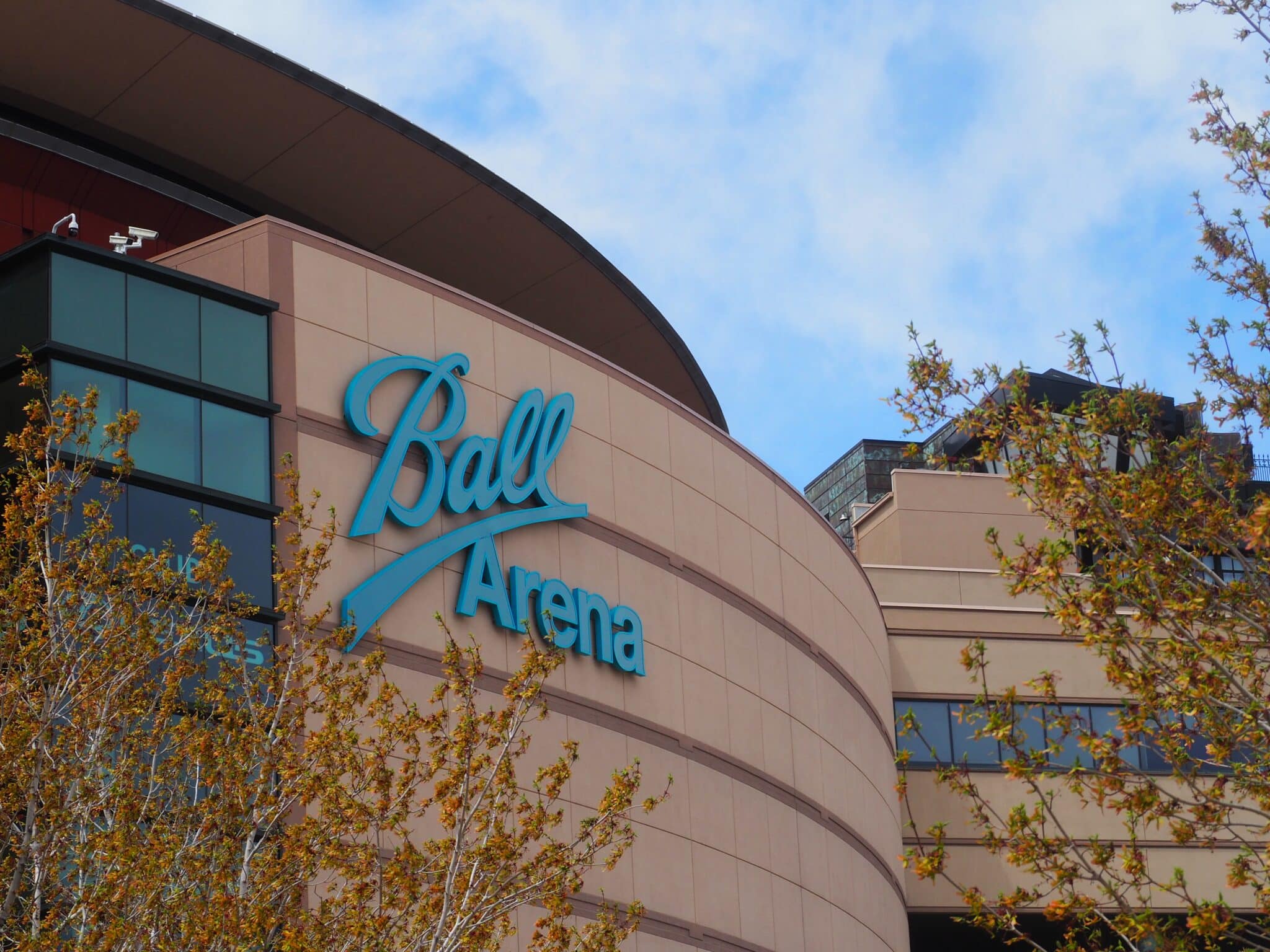 Ball Arena, which opened as the Pepsi Center, is home to the Denver Nuggets and Colorado Avalanche. (Thomas Gounley)

Locally, Rockies co-owner Dick Monfort and partners turned a parking lot across from Coors Field into McGregor Square, which opened last year and features a hotel, office space and condominiums. And the Denver City Council has given the broad OK to redeveloping the parking lots south of Mile High, although the future of that effort would appear to hinge on whomever purchases the Broncos in the coming months.

The full scope of the redevelopment effort around Ball Arena could take 20 to 25 years to complete, according to the plans. Revesco’s Duggan has given a similar timeframe in the past regarding the buildout of The River Mile.

The plans portray the project around Ball Arena as one that would complement The River Mile, and better connect it and the Auraria campus to the south to the rest of downtown. The document calls for a bike and pedestrian bridge to be erected over Speer, providing easy access to the Cherry Creek bike path.

Denver has 14 view planes, which serve to preserve the view — generally of the mountains — from specific spots in the city, such as Cheesman Park and Coors Field. One of those view planes is referred to as “Old City Hall,” and protects the view from where the structure once stood at the corner of 14th and Larimer streets.

The view plane extends over 15 acres on the southwest portion of the Ball Arena site, and thus limits the height of what ultimately could be built there. 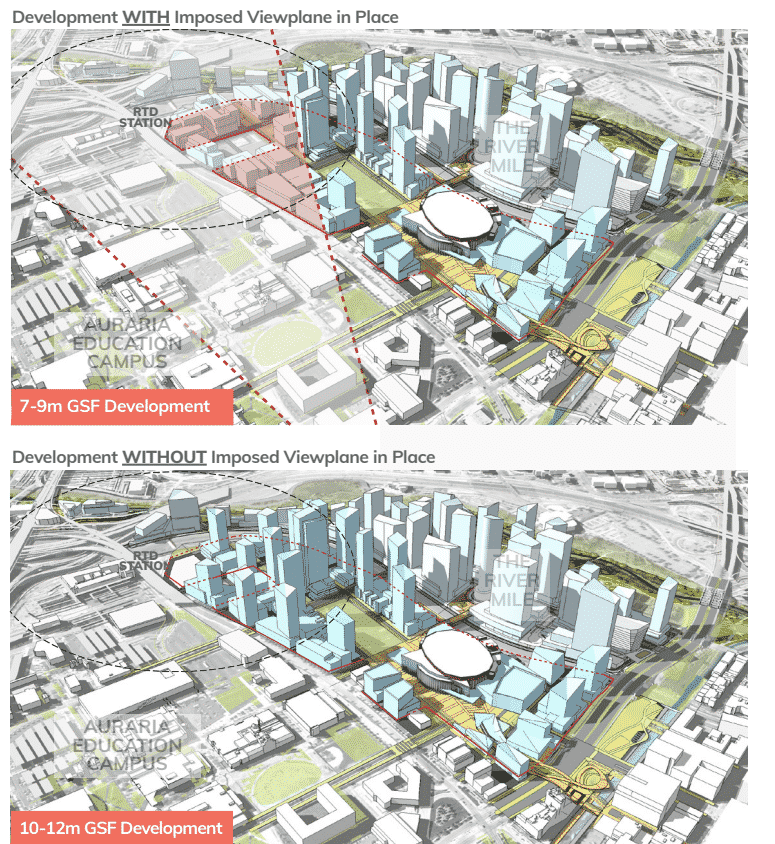 A drawing shows possible development on the site with and without an existing view plane in place.

The view plane decreases the development potential of the site by four to five million square feet and significantly impacts the growth potential around the existing RTD Mile High Station, the document states. That station is one of two that serves the property, the other being right next to the arena.

The plans call for a “signature park” within the project, which is envisioned to be 3.5 acres. A rendering shows it leading up to Ball Arena from the west, with a large central lawn framed by rows of trees on two sides.

The planning document doesn’t significantly address where future fans would park if they are driving to the arena to catch a game.

“The existing surface parking lots are a result of the needs of the arena, however, these needs may evolve and influence the new plan and how parking is accommodated, both near-term and 50 years into the future,” it states.

Kroenke, a real estate developer who is married to a Walmart heir, has owned the Avalanche, Nuggets and the Pepsi Center since 2000. He also owns the MLS soccer team Colorado Rapids and their Commerce City stadium, as well as the NFL’s Los Angeles Rams, whom he moved from St. Louis in 2016.

In May 2019, Denver Mayor Michael Hancock announced the city had reached a deal with Kroenke Sports to keep the Nuggets and Avalanche in Denver through 2040, saying the existing arena agreement with the city was set to expire in 2023.

The billionaire owner of Denver’s NBA and NHL teams is already behind The River Mile, an adjacent 62-acre redevelopment project.