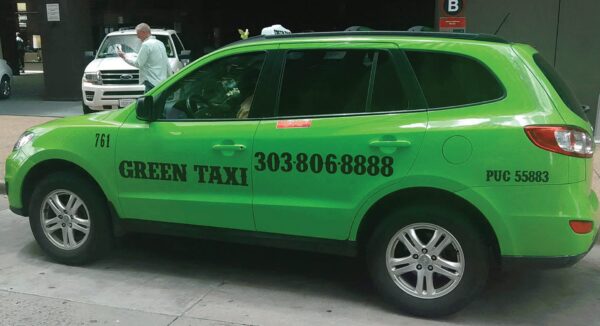 When it received regulatory approval to operate six years ago, Green Taxi Cooperative was hailed in pro-labor circles as a worker-owned innovator that would allow its drivers — including immigrants from 37 countries — to escape exorbitant fees and low wages.

The cooperative boldly predicted it would put 800 drivers on roads around Denver, which would make it the largest taxi provider in the metro area by far, with a 57 percent market share. It vowed to compete against ride-booking apps like Uber and to recruit their drivers.

On April 15, however, the Aurora-based cooperative filed for Chapter 11 bankruptcy, which allows businesses to reorganize and keep operating while paying creditors over time.

Green Taxi owes its creditors nearly $110,000 and recently had its bank account garnished because it wasn’t paying an insurance company to which it owes $54,000, court records show. It also owes about $33,000 to a second insurance company, according to its bankruptcy filing.

A man who answered the phone at Green Taxi on Tuesday said a lawyer for the co-op would call BusinessDen, but a lawyer never did. Requests for comment from Jenny Fujii, the co-op’s bankruptcy attorney, were not answered Monday and Tuesday.

The bankruptcy filing comes five years after Green Taxi lost a disagreement it had with Denver International Airport over permits. In March 2017, DIA announced that Green Taxi would receive 36 permits, far fewer than it wanted and far fewer than some competing companies were given. DIA had considered giving all companies an equal number but decided against that idea.

“Guys are not making money. It totally holds us back as a business to grow,” Abdi Buni, who immigrated from Ethiopia in 1996 and founded Green Taxi in 2015, told Westword in 2017. The cooperative had about 350 drivers then.

Buni said this week that he left the co-op almost five years ago and only learned of its bankruptcy when a reporter contacted him.

Green Taxi drivers pay a one-time fee of $2,000 when they start at the cooperative, then $75 and insurance costs monthly, according to past media reports. Those amounts are considerably smaller than cabbie fees at traditional taxi companies, the co-op has told reporters.

Green Taxi does not appear to have a phone app, unlike ride-booking companies and at least one other Denver taxi company. It instead relies on in-person hailing and phone reservations.

Like other taxi companies, Green Taxi has settled several lawsuits related to car crashes, the most serious of which was resolved for an undisclosed amount last July. A Highlands Ranch woman alleged that Green Taxi hired a driver with a violent past and that, while drunk one day in October of 2018, the driver rear-ended her car in Denver and then fled the scene.

Green Taxi Cooperative once predicted it would lead the local taxi market.