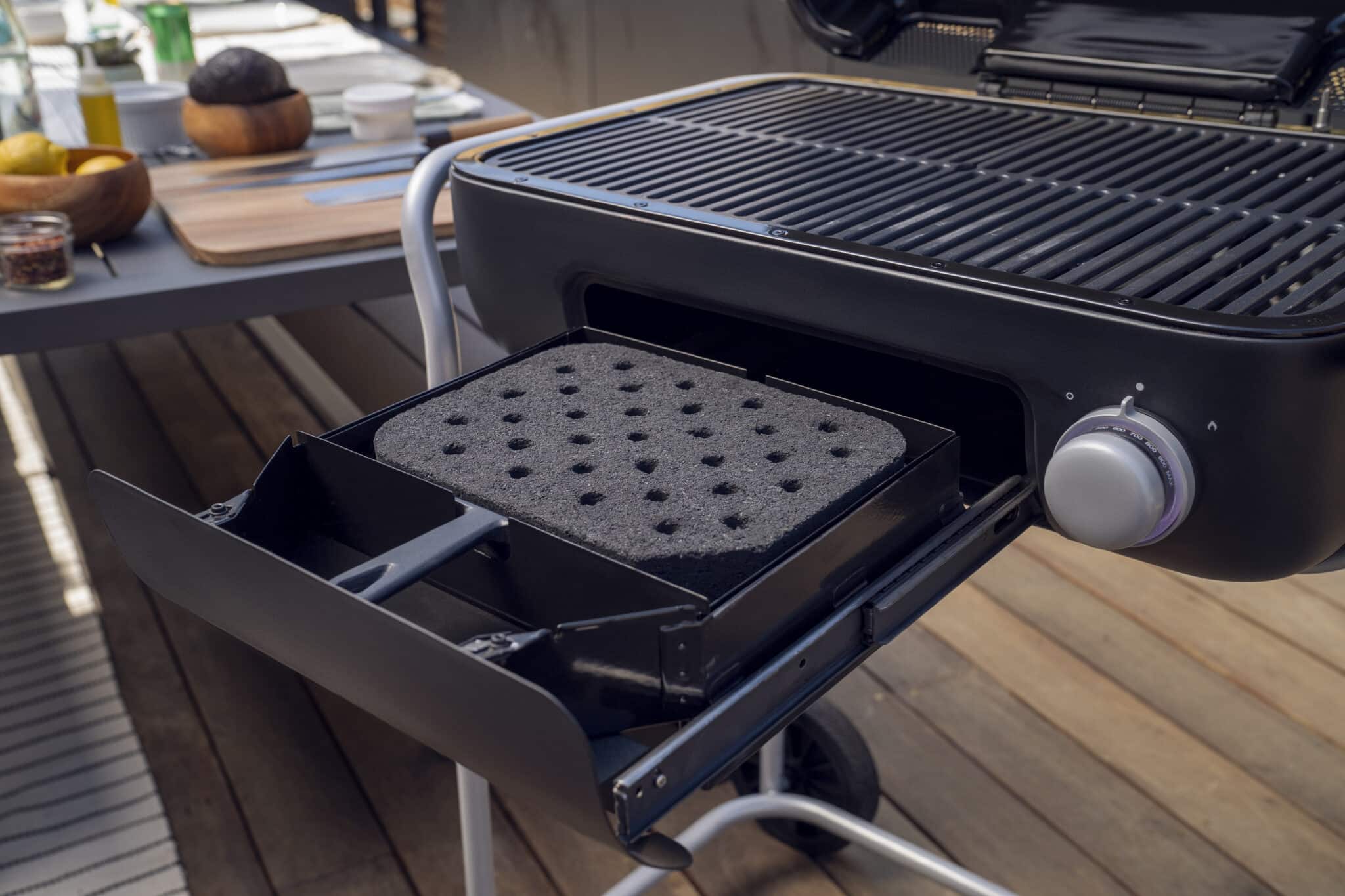 Spark Grills developed custom wood and charcoal Briqs that ignite instantly with the turn of a switch. (Photos courtesy of Spark Grills)

After living in Kenya for a couple of years, Ben West fell in love with cooking with wooden charcoal.

And when he moved back to his hometown of Portland, Oregon, in 2015 an idea sparked in his mind.

“I saw there was this renaissance of going back to wooden charcoal in restaurants across the country, and I really wanted to continue cooking that way myself,” West said. “But I learned that 80 percent of grill outs are with propane even though people know that cooking with wooden charcoal tastes a lot better.”

In 2017 he started developing Spark Grills, a high-tech charcoal grill that marries the flavor of charcoal with the convenience of gas. 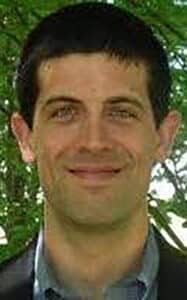 West, now 41, spent three years building the grill. With a team of biomass and food scientists, he developed custom wood and charcoal briquettes that ignite instantly with the turn of a switch — no lighter fluid necessary — and get hot enough for grilling in just a few minutes.

The entrepreneur moved the company to Boulder in 2019 and put the grill on the market in the summer of 2020.

“I had known Boulder as the Silicon Valley for food. So, I thought it would be a much better place for us for the long-term,” West said.

Last month, the startup garnered $7 million out of a $12.5 million capital raise with participation from Boulder-based Caruso Ventures and New York-based Lerer Hippeau. West said he plans to use the funds to enhance marketing efforts, invest in product development and ramp up production for the upcoming grilling season.

This brings the company’s total raised to $25 million, West said.

The Spark Grill, which ranges from 250 to 900 degrees Fahrenheit, retails for a base price of $1,100 and has an easy turn dial, cast iron grill gates, electric ignition and no ashy mess.

“The data we’ve collected from our app show that Spark customers are grilling twice as much as the industry average, around 55 times a year, or a little more than once a week.”

It can fit about 12 burgers and can be connected via Bluetooth to the Spark Grills app, which monitors grill and cooking temperatures. The grill comes with three charcoal briquette, a cutting board, temperature probes and a 15-foot power cord. 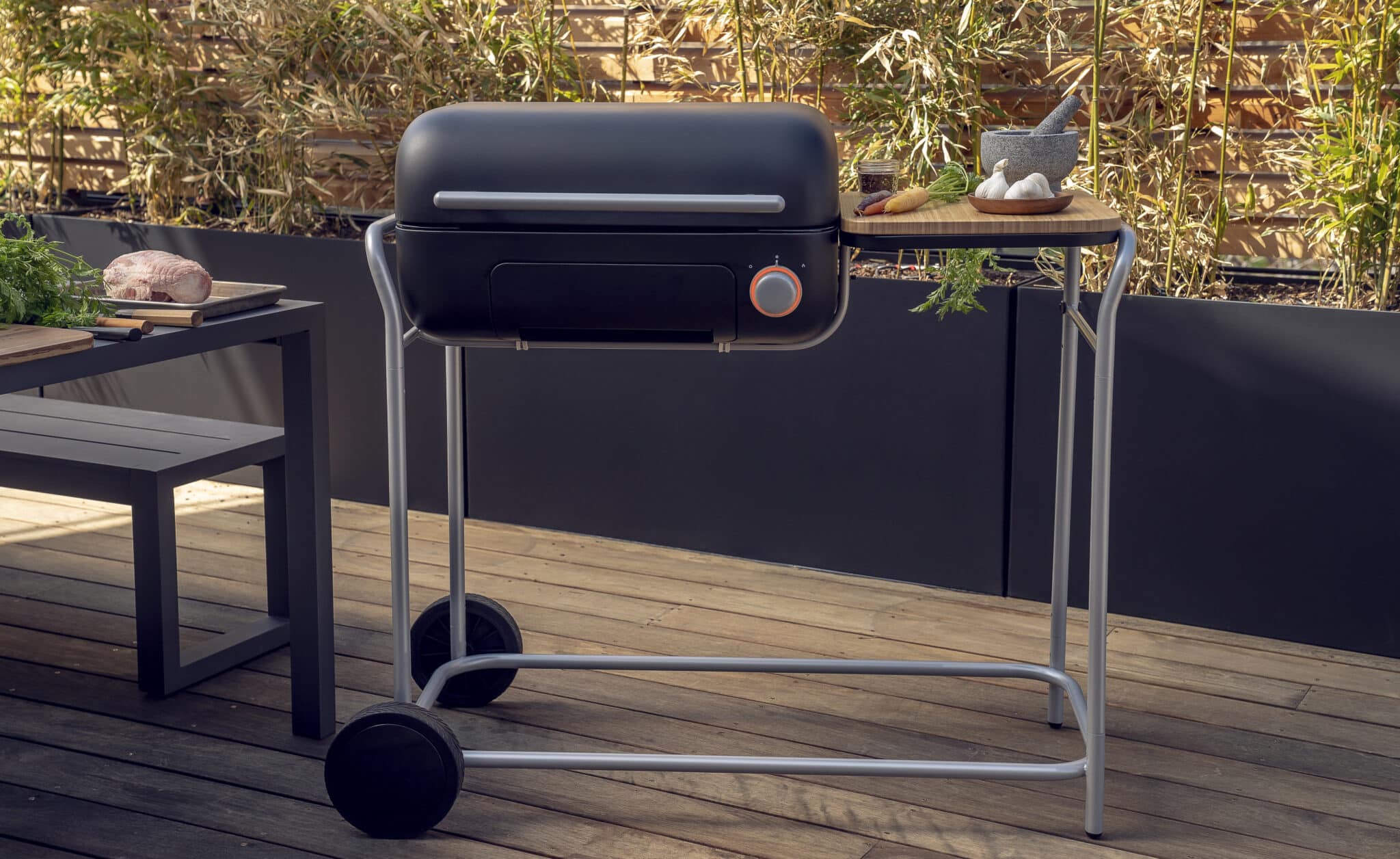 The Spark Grill retails for a base price of $1,100 on the Boulder company’s website.

“We think we’ve redesigned the experience of grilling with great taste and efficiency in an industry where there’s not a lot of innovation going on,” West said.

Spark manufactures its grills in Southeast Asia but distributes them from a 40,000-square-foot facility at 6837 Winchester Circle in Boulder, where it also manufactures its briquettes and houses its staff of around 25 employees. West plans to hire 10 more in the upcoming months.

Before this endeavor, West founded another grill company called EcoZoom in 2011. EcoZoom made wood and charcoal cookstoves for developing countries, which is why he lived in Kenya. The five years he owned the company, he sold more than one million units in 45 countries.

“That’s where I fell in love with cooking with wooden charcoal,” West said. “It draws people in, it makes great food and a super romantic experience.”

“In developing countries, 4 million people die every year from respiratory diseases, which can be a result of cooking with wooden charcoal,” he added. “But to eliminate that, it’s all about tuning the wooden charcoal to burn super efficiently, which is what had me create wooden charcoal fuel to work very tightly with a grill in a way that’s never been done before.”

Spark Grills developed custom wood and charcoal Briqs that ignite instantly with the turn of a switch. (Photos courtesy of Spark Grills)