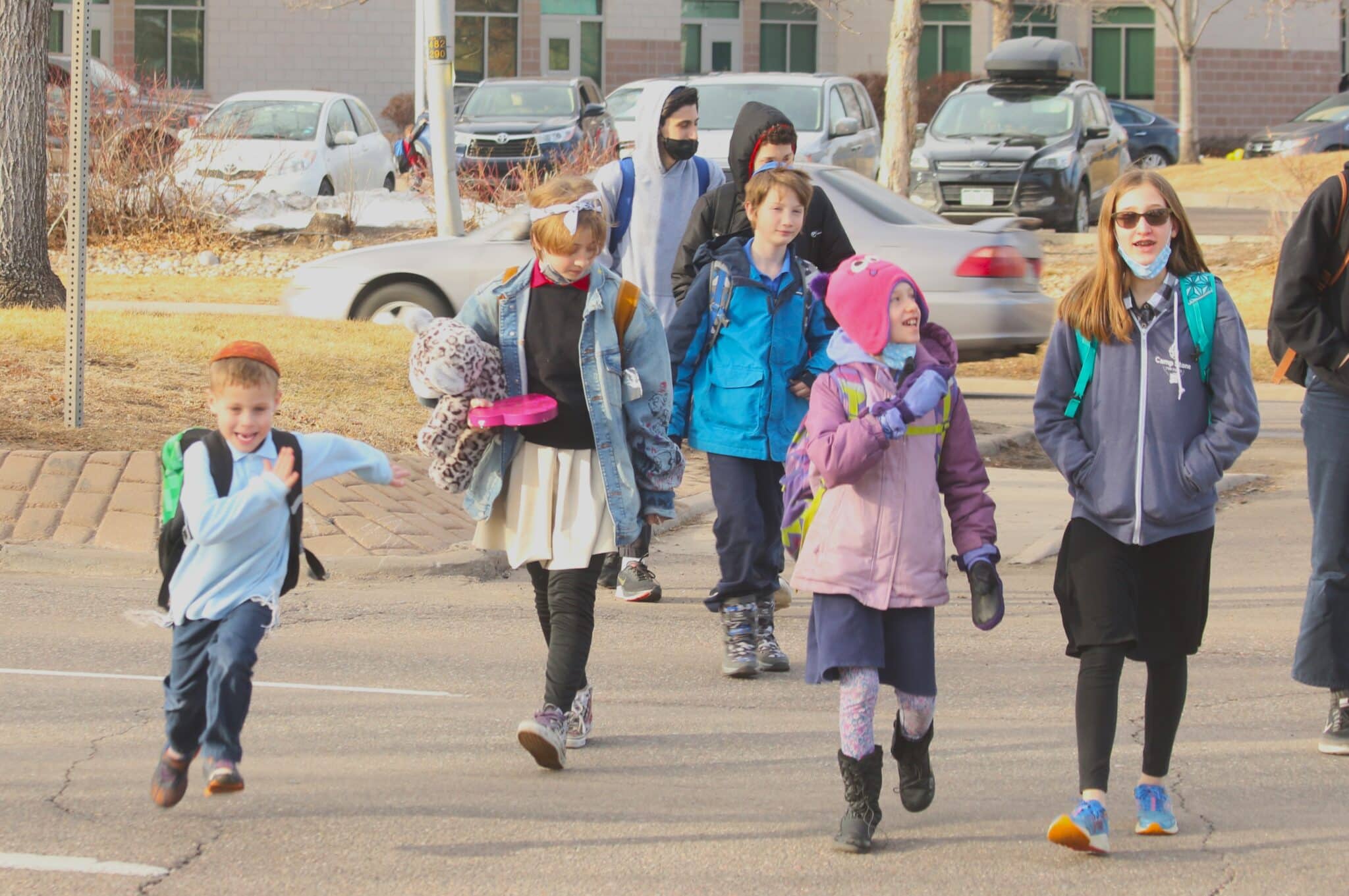 Students from Denver Academy of Torah cross Alameda at Newport Way on Feb. 14. Parents say the rush-hour traffic causes dangerous situations for students trying to get to the other side. (Eric Heinz photos)

A private school in Denver has been getting mixed signals on when it might finally get a traffic light to make crossing a busy thoroughfare safer for students.

Denver Academy of Torah parents and school leaders first requested the city add a stoplight in 2012.

“It’s an established school, and you have a lot of kids that live in that area needing to get back and forth on a daily basis,” said David Zalkin, a pediatrician who has three kids who attend. “And yet it’s like the city’s been basically ignoring us at least for the past 10 years.”

Denver Academy of Torah is along Alameda Avenue between Quebec Street and Monaco Parkway. The street has three lanes going each direction with a narrow median.

“Well-meaning motorists in the (closest) and middle lanes still stop and wait for the kids to cross,” Zalkin said. “But the kids have had to learn that some people are blazing by in a car in the far lane, and it makes for a very dangerous situation.”

About 4 p.m. on Feb. 14, as rush-hour traffic began to swell, a BusinessDen reporter observed children sprinting across Alameda to the south side of the street, sometimes pausing at the median to wait for the traffic going the other way to stop.

“There’s definitely been vehicle problems,” said Principal Lisa Stroll. “Where a lot of this (effort) comes from are these near misses.”

After a decade of complaints, the end is in sight — maybe. In November, the Denver City Council approved funding for a stoplight in front of the school as part of a $3 million package involving six other locations. 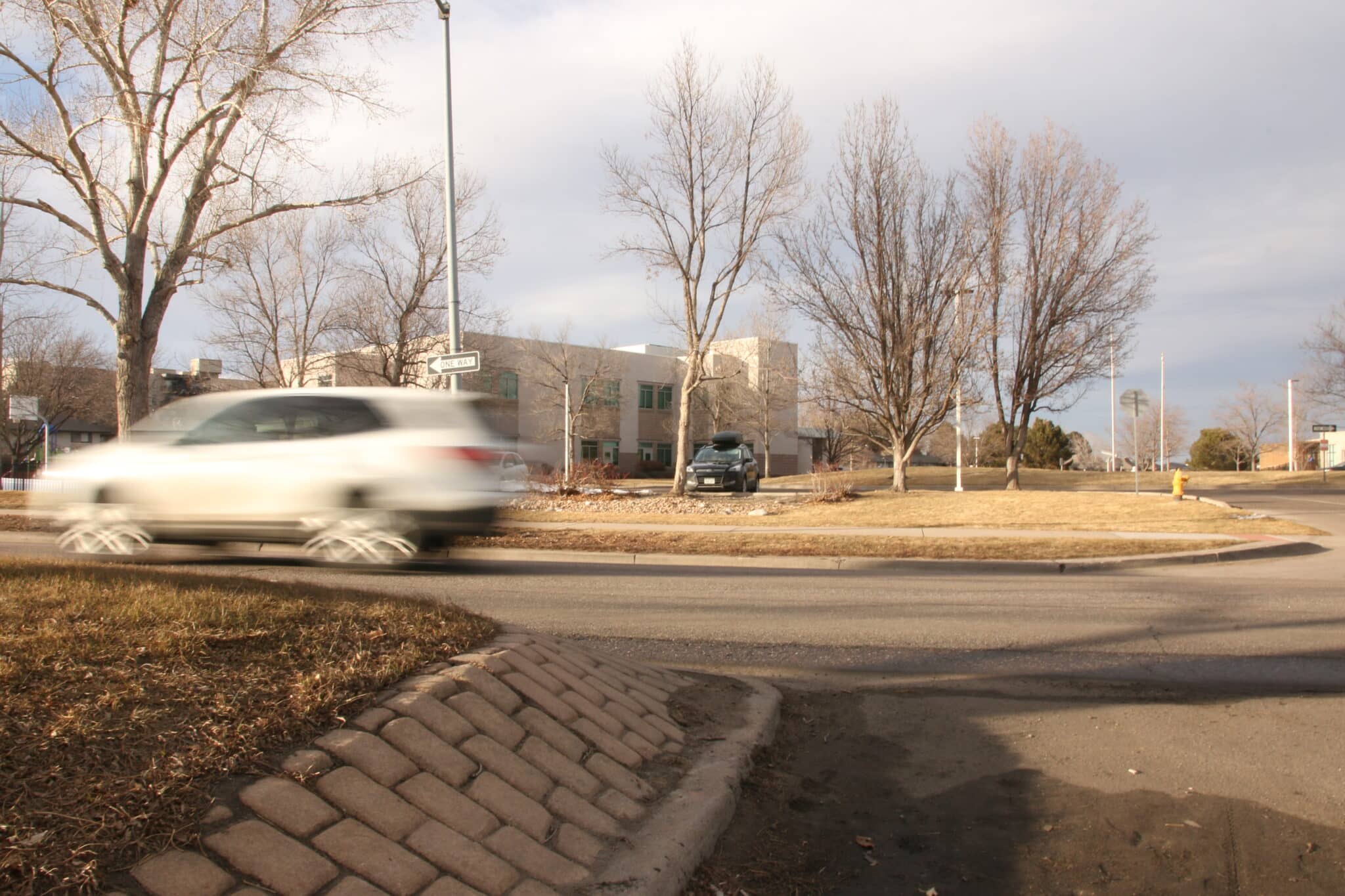 Denver Academy of Torah parents and school faculty have asked for a traffic signal at Alameda Avenue, between Quebec Street and Monaco Parkway, since at least 2012.

But Denver Torah Academy still has no set date as to when the signal might be up and running.

The school community requested a signal at least as far back as 2012, according to emails reviewed by BusinessDen.

Then-Councilwoman Mary Beth Susman’s office told the school in a 2012 email that flashing school zone beacons would be installed on Alameda by spring 2013, and the speed limit in the area would be reduced to 25 mph when the lights flashed.

But that has not satisfied the school members who wanted a crosswalk traffic signal.

In 2018, Zalkin emailed Susman about the traffic crossing, saying that the city should provide a crossing guard if it couldn’t put up a signal.

Nothing came of that request. Vanessa Lacayo, spokeswoman for the city’s Department of Transportation and Infrastructure (DOTI), said the city and Denver Public Schools have crossing guard programs, but the site in front of Denver Torah Academy wouldn’t be eligible because only uniformed police officers can stop traffic where there is no stoplight or sign.

Lacayo acknowledged the stoplight had been requested in 2012, but said it wasn’t until 2019 when the department identified funding for it.

Lacayo said there are nine criteria for determining new signal priority, which include the crash history of the intersection, the current usage, speed and traffic volume and surrounding development.

She said a special consideration is given for intersections that are on the Denver Vision Zero high-injury network or in poorer areas or if the signal can be built as part of another infrastructure project. The evaluation and prioritization is conducted each year. 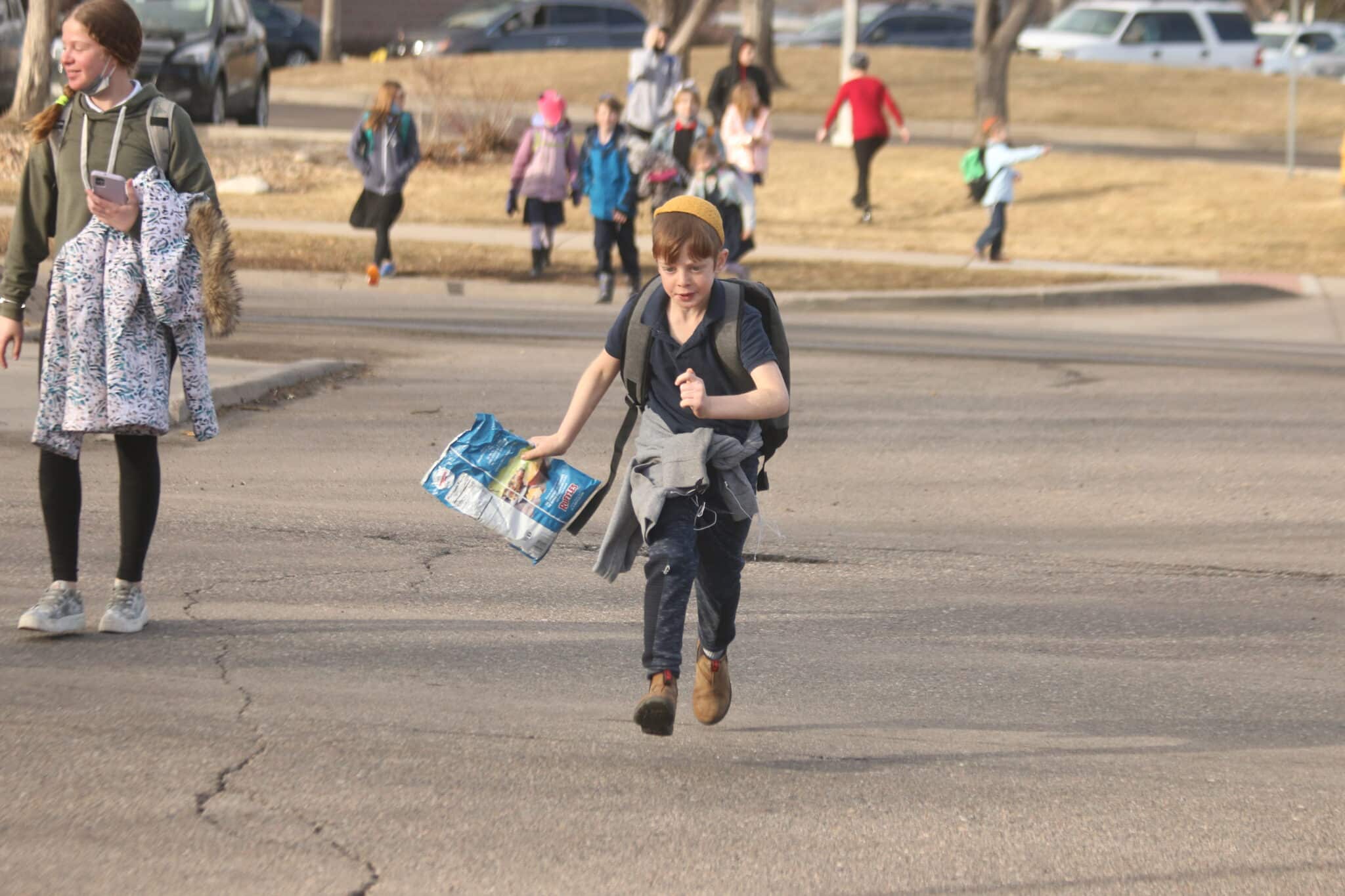 A Denver Academy of Torah student crosses Alameda Avenue at Newport Way. The city plans to install a traffic light at the crosswalk there by 2023.

Lacayo said the installation of a new traffic signal is a major infrastructure project that generally costs between $350,000 and $725,0000 per intersection.

Lacayo said it’s typical for signal design and construction to take at least three years. Construction on the stoplight near Denver Torah Academy is expected to start sometime this fall, Lacayo said. A timeline for final completion hasn’t been established.

The area where the school is located is represented by Councilwoman Amanda Sawyer, who said in an email to Zalkin earlier this month that the project is expected to be completed in mid-2023.

“I was just there yesterday and watched a silver 4Runner fly through the school zone while the lights were flashing,” Sawyer wrote. “It’s incredibly frustrating and we certainly hear your concerns.”

Speaking to BusinessDen, Sawyer noted that Alameda is a major road, and said speeds get higher along the eastern corridor because there aren’t many lights and the street is wide.

While awaiting a signal, Denver Academy of Torah parents have wondered if there could be an alternative, like changing the timing of traffic lights at the intersections of Monaco and Quebec to possibly slow traffic down a bit, but Sawyer said the city would not be able to do that.

Rachel Ruben, a parent of four children currently at the school, said having students walk along Alameda to cross at either Monaco or Quebec isn’t a good option either.

“I don’t want them to go to those intersections. They’re even worse than the crosswalk,” Ruben said.

When it’s finally installed, the traffic signal won’t require pedestrians to press a button to indicate they want to cross, Lacayo said. That’s a nod to the area’s Jewish population, many of whom don’t use electronics on the Sabbath.