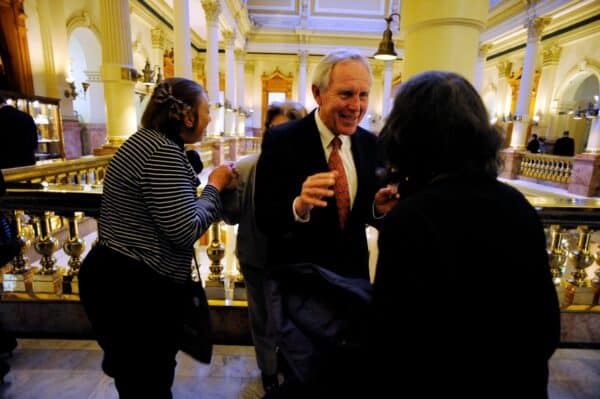 Joe Blake, President and CEO of the Denver Metro Chamber of Commerce, socializes following the State of the State address by Colorado Gov. Bill Ritter at the state Capitol in Denver on Jan. 08, 2009.

Named chancellor in 2009, Blake helped to develop the institution’s first systemwide strategic plan. Under his leadership, the CSU-Global campus was launched. He also took part in creating Commitment to Colorado, a program that offers half-price tuition to lower-income students.

“He was a remarkable, wonderful man,” said Tony Frank, the current chancellor of the CSU System. “Our planet got dimmer today and heaven got a lot more interesting and a little more civil.”

When Blake became chancellor of the system, Frank was named president of CSU Fort Collins. The two men worked together and forged a deep friendship, Frank said.

“He had the unenviable task of being my first boss and cleaning up all the messes I made as a puppy,” Frank said with a chuckle. “Over the years we struck up a friendship, it would be hard to find someone who knew Joe who didn’t consider him a friend.”

After leaving the chancellor position in 2011, Blake continued to serve as Chancellor Emeritus of the Colorado State University System.

A Colorado native, Blake graduated from Denver’s East High School. He went on to graduate from Dartmouth College and the University of Colorado School of Law. His career path steered him through diverse pursuits including FBI agent and real estate developer, he was part of the senior leadership team that created Highlands Ranch, and was president and CEO of the Denver Metro Chamber of Commerce.

“Joe Blake was one of the best among us — and with a really interesting and pretty cool background. I mean, who goes from FBI agent to real estate developer to chancellor of a university? And throw in Denver Metro Chamber of Commerce CEO along the way,” said J.J. Ament, DMCC president and CEO, in a written statement. “I’ve never met another who had Joe’s mastery of vocabulary. I’m convinced Webster’s called him a few times to see what they’d missed in their latest edition. In a battle of wits, you wanted to be on Joe’s side every time.”

Prior to becoming the CSU chancellor, Blake had served the chamber for almost a decade. As chamber president, he was among those who led the charge in passing Referendum C, the 2005 fiscal reform measure that provided vital revenues as Colorado recovered from the recession of the early 2000s.

He also served as co-chairman of Colorado Wants You, a statewide 501 (c)(3) organization created by business and civic leaders to support military operations and units, veterans and their families, in Colorado.

“He had, as nearly as I could tell, boundless energy,” Frank said. “Energy that channels itself in positive ways. There were situations where he definitely deserved to lose his temper, but I never saw that happen. He was always so focused to turn any situation into a positive.”

Blake was appointed to CSU’s Board of Governors in 2006. In December 2019, Blake gifted $5 million to the university’s College of Liberal Arts.

The university and Blake’s family are working toward holding a celebration of his life to be held on a future date, Frank said.

Blake was preceded in death by his wife, Elizabeth, in November 2007. He is survived by a son, Joe Jr.; his daughter, Annie; and four grandsons. 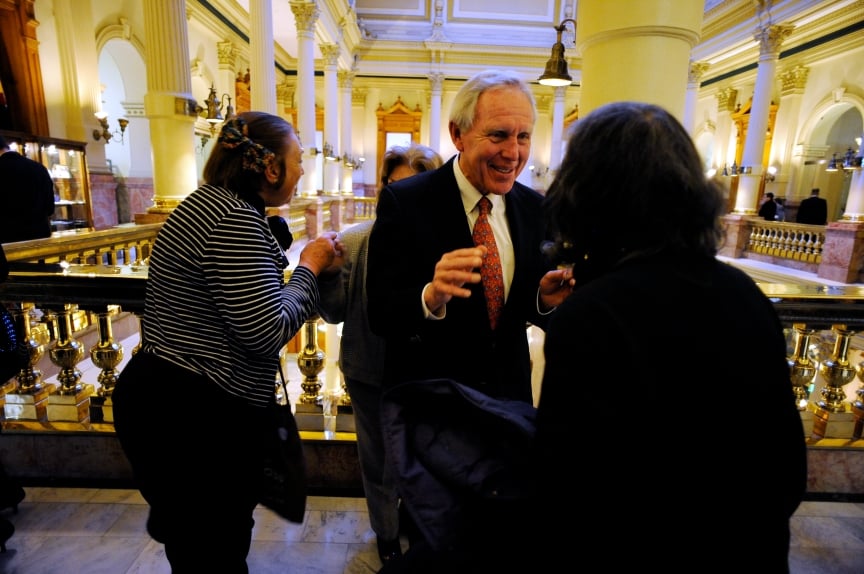 Joe Blake, President and CEO of the Denver Metro Chamber of Commerce, socializes following the State of the State address by Colorado Gov. Bill Ritter at the state Capitol in Denver on Jan. 08, 2009.

His career path steered him through diverse pursuits including FBI agent and real estate developer, he was part of the senior leadership team that created Highlands Ranch, and was president and CEO of the Denver Metro Chamber of Commerce.